Judges. University deans and professors. Partners at prestigious firms. Top attorneys at multi-national companies. These are just some of the leadership positions held by alumni who have served as editors of the Southern California Law Review, the flagship scholarly journal of the USC Gould School of Law, over its 90-year history.

Under the guidance of the editor-in-chief and additional officers, who are elected each spring, the 60 student editors work in teams to ensure the issues arrive on deadline but also are fully checked for accuracy and adherence to law review style.

Their long hours and dedication pay off in many ways, from the initial thrill of seeing an article or note published, to shaping public debate on a controversial topic or ultimately being cited in a court brief. But one of the significant payoffs may be tougher to quantify.

“One of the big benefits to participating in the Law Review is the opportunity for organizational leadership,” said Professor Ronald Garet ’81, SCLR’s faculty adviser. “Our Law Review collects talented and strong-willed people with ambition and high standards. It takes a person with exceptional ability to get everyone to play nicely with one another.” 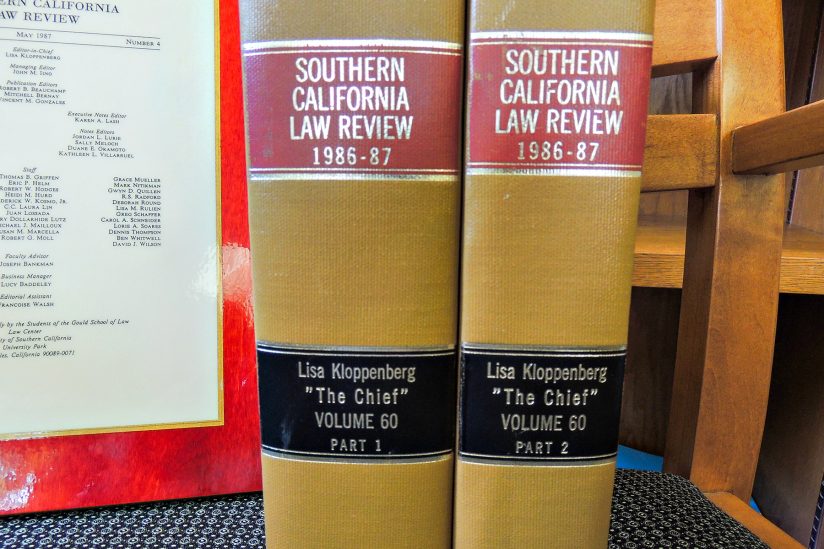 Lisa Kloppenberg ’87, who once served as the journal’s editor-in-chief, said it was “like a real-life work experience.”

Now dean of the law school at Santa Clara University, she added: “One of the greatest leadership lessons I learned was to defer to the wonderful people on my team. I was working with really smart people. And it’s just like being a dean in that you don’t want to order people around — it’s more of a collegial effort. There might be some difficult conversations, but in the end it’s a group effort and you have to empower your colleagues.”

Her own experience at the journal also helped Kloppenberg prepare for the clerkship she held early in her career with Hon. Dorothy Nelson LLM ’56, a judge on the United States Court of Appeals for the Ninth Circuit and dean of USC Gould from 1969 to 1980.

“I think that working on SCLR helped on the job market and for earning the clerkship,” Kloppenberg said. “There is that significant sense of responsibility that was honed on the Law Review when you’re handling someone else’s creative work, as well as the attention to detail.”

One of the additional challenges for serving as editor is ensuring that the scholarly legal journal remains current.

“I also want to show incoming staffers that editing is important, not just personally or professionally,” Tomassian said. “I want to show them that there’s a larger purpose because these SCLR articles can change laws — these articles have an influential impact.”

Beyond serving as editors, Garet also thinks the students who author the notes are taking advantage of a “terrific opportunity.”

“When a student takes classes in torts or constitutional law, they are learning what other people think,” he said. “But when the same student writes a Law Review note, that student is no longer just a consumer. That student is producing their own ideas on law and legal policy.”

Given the preeminent authors who’ve been published in SCLR, Garet believes that the journal boosts USC Gould’s reputation in the academic and legal worlds.

“We are publishing world-class scholars, including from our own faculty, often early in their careers,” said Garet, who ought to know. His first piece of legal scholarship was published in the journal in 1983 when he was an assistant professor at USC Gould. “It was a very constructive experience for me,” he recalled.

Other USC Gould faculty members who have been published in the journal include professors Jonathan Barnett, Rebecca Brown, Alex Capron, Ariela Gross, Daniel Klerman and Stephen Rich as well as Dean Andrew Guzman. An article by Professor Edward Kleinbard will be published in the upcoming Volume 90.

Inspired by a USC Gould alumnus, Trojans serve as mentors for African-Americans at local school.