To help spread cheer instead of illness, the USC School of Pharmacy has produced a new fotonovela titled “Infectious Rumors!” about the importance of getting immunized. La Opinion, the nation’s leading Spanish-language daily newspaper, partnered with the school to make the booklet available as an insert that will reach 50,000 households. 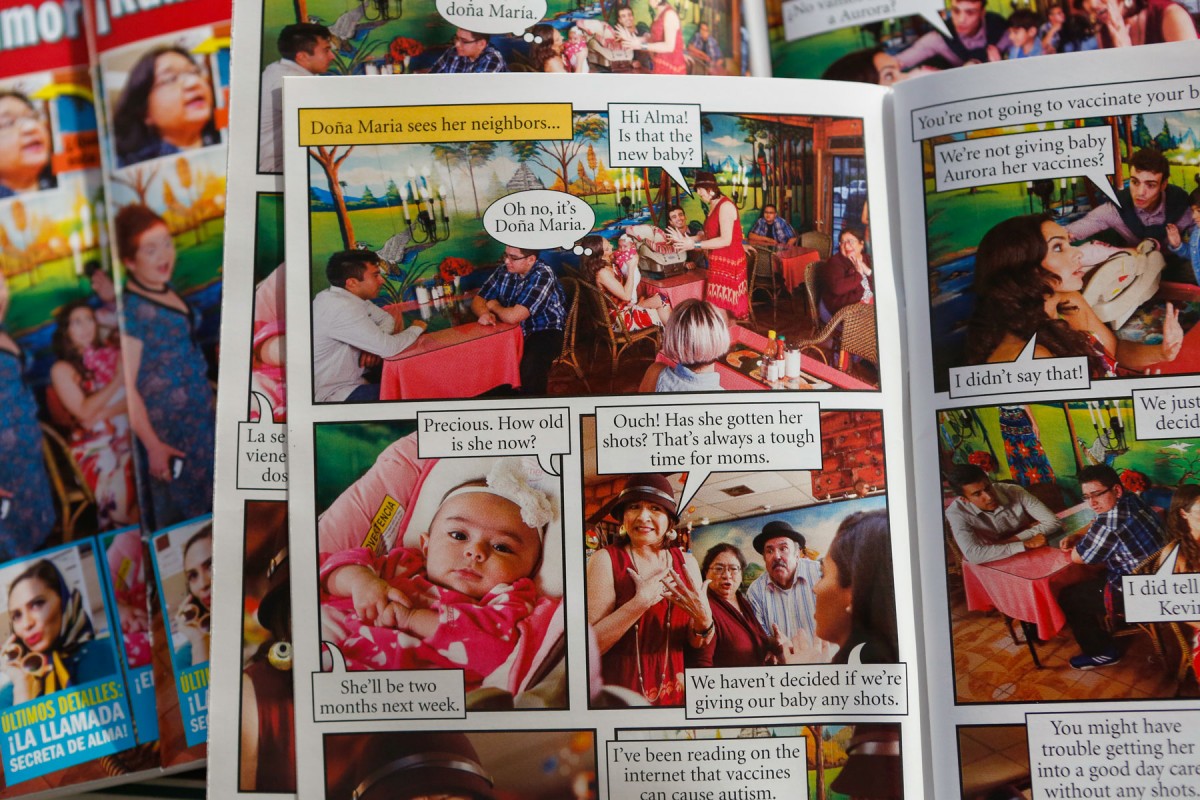 The format is akin to a comic book. (Photo/Susanica Tam)

“Infectious Rumors!” is the 10th fotonovela in the popular series that combines health information with dramatic storytelling and photography in a comic-book format. The booklet is published in both Spanish and English and will also be distributed at safety net clinics, health fairs, pharmacies and other locations. Studies estimate that each fotonovela is ultimately read by four people, which means 200,000 Angelenos will ultimately read the publication.

“We wanted to find a way to reach the Latino community with a format that was not only informative but also entertaining,” said USC School of Pharmacy Professor Mel Baron, who created the series. He produces the fotonovelas with Greg Molina, program administrator at the USC School of Pharmacy. Jennifer Unger, professor of preventive medicine at the Keck School of Medicine of USC, evaluates the fotonovelas’ ability to get the message across.

“The research shows that the fotonovelas are a very effective tool,” Baron said.

Generally a fotonovela takes about nine months to write and produce, but “Infectious Rumors!” required nearly a year to produce. The team conducted several focus groups to understand the concerns and myths the Latino population had about immunizations.

“We do focus groups because we want to know what people in the communities around the USC campuses were thinking,” Molina noted.

Participants expressed concerns about dosage, clean needles, the safety of receiving multiple vaccinations and whether the immunizations could cause autism.

“We were able to incorporate these concerns into the story to address myths and concerns,” Baron said.

The fotonovela’s distribution through La Opinion was made possible by funding from the Good Hope Medical Foundation.

Aware that breast cancer is the most common cancer among Latino women, Associate Professor Mel Baron is determined to inform this community about the importance of screening and early detection.

The rate of obesity is higher than ever, and children especially are at risk, with more than 20 percent of 6- to 11-year-old youngsters qualifying as obese.

Independent studies by the Institute for Health Promotion and Disease Prevention Research at USC and the Healthcare Management Corp. found that Sweet Temptations, a fotonovela produced by the USC School of Pharmacy, successfully increases diabetes awareness and knowledge in the Latino community.