If climate change patterns hold, the “World Famous Santa Monica Pier” might begin to resemble the lost city of Atlantis in 30 years. But why tell about it when you can show it?

That’s what USC, in partnership with the U.S. Geological Survey and the city of Santa Monica, started today with the formal launch of a virtual reality installation called “the Owl” at the Santa Monica Pier.

Through Dec. 31, beachgoers can be immersed in the shore’s submerged future. Through the viewer, they will witness in the blink of an eye a century’s worth of sea rise advancing on the shore, with a 180-degree view of affected areas precise to their location.

“While we can’t stop the inexorable changes to our beaches, we do have cutting-edge science that helps us plan today and adapt to the future,” said Phyllis Grifman, associate director at USC Sea Grant. “It’s important to have a community-based discussion about how to adapt, and the Owl helps start this conversation.”

The installation resembles the coin-operated binoculars regularly seen at beach piers but with a view of the future where all of Santa Monica Beach, even its parking lot, is drowned under the rising tide. Users can look anywhere within a 180-degree perspective, from ocean to shore, and witness total flooding by the end of the century, wrought by a combination of both sea level rise and changing weather patterns.

The virtual experience was created with scientific models developed by the U.S. Geological Survey, which projects that sea level rise in Southern California will match global projections, increasing 5 to 24 inches in the decades from 2000 to 2050 and anywhere from an additional 12 to 38 inches from 2050 to 2100.

“The Owl is an innovative way for people to see how sea level rise will change the Santa Monica coastline,” said Alyssa Newton Mann, a research, policy and planning specialist at USC Sea Grant. “Rather than looking at flood maps, these photo-realistic visuals put you at the scene of the flood.” 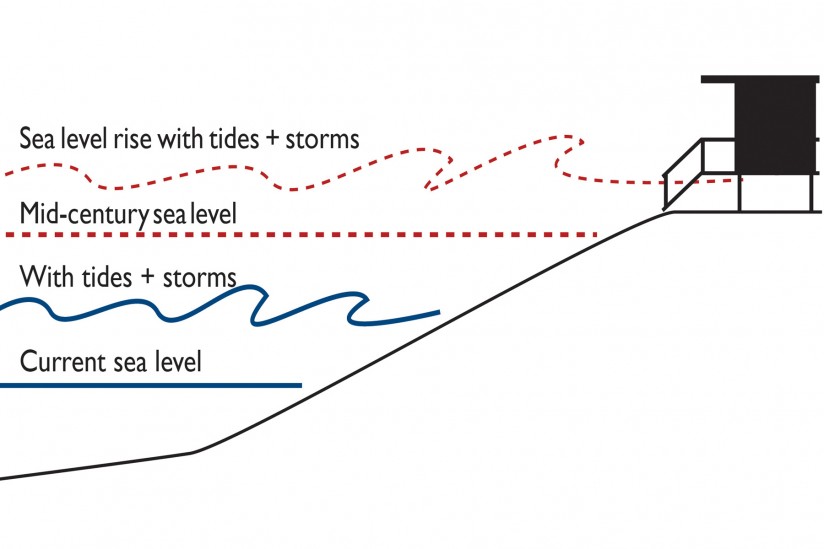 Scientists predict that sea level rise, tides and coastal storms will join forces for the duration of the century to exponentially hasten naturally occurring erosion and beach loss. (Coastal Flooding graphic courtesy of Climate Education Partners and adapted by the city of Santa Monica)

Sea Grant is devoted to funding research and developing outreach and education products to understand the fundamental threat to the entire planet presented by climate change, and especially its impact on the biology and chemistry of the ocean. Climate change is among the “wicked problems” that USC Provost Michael Quick has laid out as a priority for the university to take global leadership.

As part of its work, Sea Grant also works with local and state governments to help coastal managers adapt to the potentially destructive effects of climate change. For this project, the information gathered from visitors to the pier installation will assist Santa Monica planners gauge levels of public concern about sea level rise and assess opinions on natural options, such as sand dunes, to protect the shoreline.

“The Owl” itself was originally developed as a construction virtual reality viewfinder by the Owlized company. It has been in use in Marin and San Mateo counties. USC Sea Grant hopes to continue to further this experience by adding similar installations at other locations along the Southern California coast as well after the Santa Monica Pier installation closes this year.

What is ‘committed warming’? A climate scientist explains why global warming can continue long after emissions end

Because of humans, the concentration of planet-warming carbon dioxide in the atmosphere is now 50% higher than before the industrial era and these gases are raising Earth’s temperature.