Greg Ver Steeg, a USC physicist and researcher, was used to doing complicated work – he’d analyzed black holes while getting his PhD at Caltech and developed mathematical equations to understand social media influence while at USC.

But then, in fall 2013, he was recruited to work on something totally different.

“There was definitely a moment where the urgency of what we were trying to do was heightened beyond anything I had ever worked on,” he said.

And that’s because the work was close – like, standing right next to him: A few months earlier, while researching gene expression, Pepke was diagnosed with late-stage ovarian cancer.

The prognosis wasn’t good – it was late in the game and she had a lot of disease. She’d live maybe five more years.

There wasn’t a lot of time to hope that things just work out.

“I had just given birth to my daughter 2½ years earlier,” Pepke, 49, said. “There wasn’t a lot of time to hope that things just work out.”

So she decided to get to work, using gene expression – which looks at how DNA and proteins interact at the cellular level – to see how people might react to cancer differently and thus react to treatments differently. “I knew this would take some serious algorithmic power,” she said.

Ver Steeg, a faculty member in the USC Viterbi School of Engineering’s Department of Computer Science and the school’s Information Sciences Institute, was known for applying algorithms to problems. The idea was to use public studies, data on tumors on hundreds of patients with ovarian cancer, and identify any patterns – and in turn, use those patterns to figure out which treatments may or may not work.

And possibly, help Pepke figure out how to treat her own.

Ovarian cancer isn’t common – only 1.3 percent of women will be diagnosed in their lifetimes and it makes up 2.4 percent of cancer deaths, according to the National Cancer Institute.

FIND OUT MORE: Listen to the USC Viterbi School of Engineering podcast on Shirley Pepke and Greg Ver Steeg, and learn more about their research.

Since Pepke saw very little research on it, she decided to fill the gap.

While they researched, she was also getting treated, including an initial surgery that removed the tumors on her abdomen. 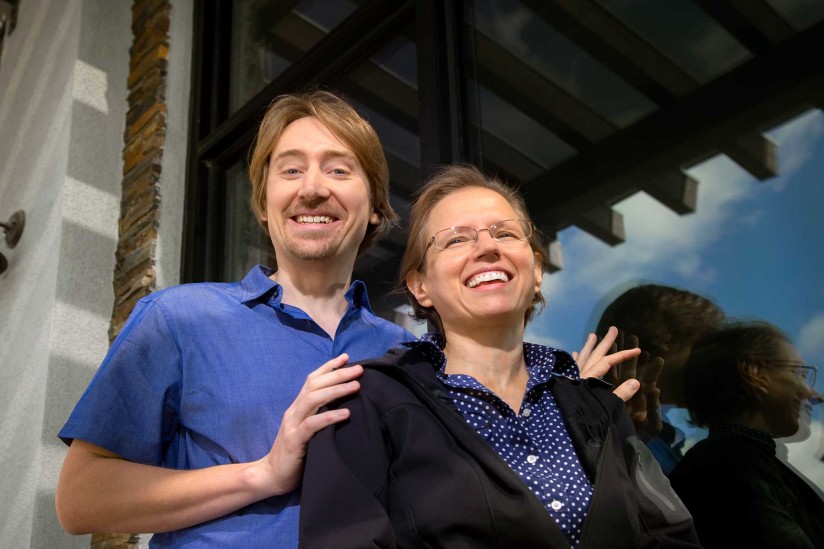 Doctors use something called a “tumor marker” to test the cancer in the blood. A normal number would be less than 35. Pepke’s number at diagnosis? More than 15,000.

“Most of the oncologists thought I would die soon,” Pepke said. After chemotherapy, the marker number should go down. At first it did. But then her cancer came back, and the marker continued to rise — even with chemotherapy.

“It was frustrating and very discouraging that they didn’t have anything to offer that was more hopeful,” she said.

She was also prepared for their research not to pan out.

“For a while, things weren’t going so well,” she said. “I wasn’t getting what I wanted out of the data.”

Then one day, after more than a year together, the data looked different.

“It was suddenly like looking at the dictionary of tumor biology,” she said. “It was suddenly pulling out all this information other algorithms couldn’t. It looked really beautiful and informative.”

This data discovered something about her own tumor – that her immune system wasn’t working right.

Instead of doing more chemotherapy, as recommended, she convinced her oncologist to try a new immune therapy drug intended for melanoma patients. It had the potential to “reset” her immune system, she said.

“I knew my immune system needed a kick-start,” she said. “I told him if I don’t do this, I will die soon.”

She tried the drug, and then took a break from it to get surgery to remove a cancerous tumor on her lymph node at Stanford University’s hospital, one of the only medical centers that agreed to do it. She tried chemotherapy again. In June she stopped everything.

A few months later, she got her tumor marker checked – it was lower. Then a month later – it was way lower.

She’s now in remission, as of about a year.

“They can’t really say what happened,” she said.

She can’t say for sure if the research led to her remission.

And that’s what she hopes the research can provide women.

She wants to urge women to ask more questions – to ask doctors “do you know what’s going on in my tumor?”

She also hopes gene expression tests that exist for breast cancer, which can test certain things important for treatment, could be adapted for ovarian cancer – testing for immune suppression or disease aggression.

When Pepke originally had symptoms, doctors waved her off. They didn’t test for the right things or trust her instincts.

She had to demand a pelvic ultrasound – where a doctor found tumors all over her abdomen.

Now, doctors look at her in remission and say, “This doesn’t happen,” she said.

Pepke and Ver Steeg’s research should be published next year. And they haven’t stopped working.

Ver Steeg’s research is funded partly through support from real estate entrepreneur and philanthropist Michael Keston and his wife, Linda, who backed the Information Sciences Institute through an endowment.

The project aims to accelerate the development of reliable blood tests for biologically based precision treatment and disease monitoring.

A low-calorie fasting-like diet, plus chemotherapy, enables the immune system to recognize and kill skin and breast cancer cells, according to a new USC-led study.

The gift benefits the Lawrence J. Ellison Institute for Transformative Medicine of USC, a new center in Los Angeles.

Biologist recruits USC researcher to study cancer — her own