The Glorya Kaufman International Dance Center, the largest dance-dedicated building on a private university campus, had its grand opening Oct. 5 in a stylish celebration of movement, scholarship and the arts.

At noon, several hundred people filled the courtyard of the handsome Italianate Collegiate Gothic building, a crowd that included more than two dozen USC trustees, many senior administrators and deans and USC Distinguished Professors who were introduced by Robert A. Cutietta, dean of the USC Glorya Kaufman School of Dance.

Also in attendance: friends of the school, faculty members and enthusiastic USC Kaufman students who later gave building tours and worked on choreography in the new studios.

Dance patron Glorya Kaufman, the school’s principal benefactor, was praised by USC President C. L. Max Nikias, who said she stands among the world’s most visionary philanthropists. “But in the world of dance, she is without peer,” he said.

It was Kaufman’s transformative gift in November 2012 that established the dance school at USC that bears her name. Her gift created an endowment to support the school’s programs in contemporary and classical dance, recruit renowned faculty and provide student scholarships, as well as fund construction of the instructional building.

USC Kaufman is as innovative as dance itself, and Glorya’s presence can be felt in every room.

“USC Kaufman is as innovative as dance itself, and Glorya’s presence can be felt in every room,” Nikias said.

“USC Kaufman, one of our six world-class arts schools, positions Los Angeles as the dance capital of the West coast … of the Pacific Rim … and even of the world.”

The grand opening was an “emotional, overwhelming and humbling” experience for Kaufman, she told the audience. She dedicated the day to her late husband, Don, whom she said would have been proud to support the endeavor, she and explained how he overcame a hard life as a child to become “a futuristic visionary who helped build cities.” 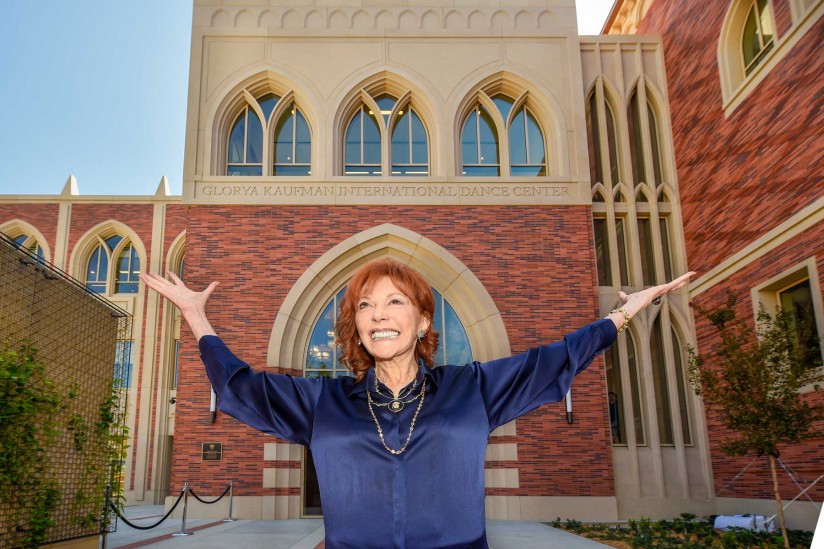 Kaufman said being at the opening was an emotional experience. (USC Photo/Gus Ruelas)

The patron, who has been an active supporter of the school, attending student performances and working with the building architects, said she hopes to be on the dais to congratulate “my kids” when they graduate.

Her “kids” were effusive in their praise for their new home.

“The lighting is amazing. It’s awesome to dance during the night because a very pretty glimpse of light comes through the big windows,” said BFA sophomore Brandon Carpio from Tampa, Fla. “There are so many different rooms that you always see different choreographers doing work at the same time.”

Justin Pham, a BFA freshman from San Diego, said: “I’m happy to be at one of the most prestigious dance programs in the world, and the program wouldn’t be what it is without this building. My favorite aspect of this space is that we have access to the rooms all the time.”

“I’ve taught all over the world, and this space is bar none,” said Desmond Richardson, artist-in-residence and co-director of Complexions Contemporary Ballet. “It’s beautiful to see how the students own the building and seem to feel at home.”

Jodie Gates, the school’s vice dean and director, called it “an exquisite new home” where she and other faculty members are shaping new movement models — intersecting dance techniques and creating hybrid forms to be expressed in new media, scholarship, studio practice and choreography.

“In this state-of-the-art home for dance, we are developing the next generation of dance leaders connected to the world at large,” she said.

The building’s groundbreaking took place in April 2014, and the inaugural class of BFA students enrolled in fall 2015, using facilities scattered across campus. When the school’s second class of BFA dancers arrived in August, both cohorts began taking classes in the new building as it was receiving its finishing touches.

For example, for aesthetic reasons, the first floor hallways have no 90-degree angles. Corners are replaced by curves, and the hallways between the dance studios mimic the shape of a dancer’s leg en pointe.

Hallway ledges are at barre height so dancers can stretch between classes.

“The flowing interior design celebrates movement and the expanse provides one with a sense of lift, just as Glorya Kaufman intended,” said Jeffrey de Caen, the associate dean for operations at USC Kaufman and the USC Thornton School of Music, who supervised construction for the university.

There is a sweeping grand staircase that ribbons between the building’s three levels. The spacious, double-height lobby is marked by an unusual Art Deco chandelier created from six vintage light fixtures donated by Kaufman. Her portrait, posing with her late dog, Troy, hangs on the south wall. The carpet is a jewel-toned abstract pattern and light cherry wood casework is used throughout the building.

Four of the studios have marley surfaces for ballet and contemporary dance, and the other two have wood surfaces that are better for other dance styles. For soundproofing purposes, all the floors float, rather than being attached to the slab foundation or side walls.

Technology throughout the building is state-of-the-art. All lights are LED, and internet connections are the fastest and broadest bandwidth available. All studios have wall-mounted flat screens and sophisticated audio-system systems that connect with the building’s main network.

Facts and figures for the Glorya Kaufman International Dance Center.

The sixth studio is a flexible 3,591 square-foot performance studio with 140 motorized retractable seats.

More than 200,000 hand-laid Roman bricks on the exterior

A 3,591-square-foot performance space can be quickly converted from a studio to a proscenium stage venue, thanks to 140 motorized retractable seats and wings that withdraw. The space includes high definition projection technology, as well as of-the-moment video, audio and lighting systems. A full-length theatrical scrim can descend from the room’s pipe grid on the ceiling to the floor.

The mezzanine level includes men’s and women’s dressing rooms and a fitness and training zone with dance-specific somatic equipment. (A larger fitness center is part of the USC Village across the street — the $700 million, 1.25-million-square-foot residential and retail complex to be completed in fall 2017.)

A viewing balcony on the mezzanine allows visitors a bird’s-eye view of two of the first floor studios.

The second floor includes the Turquoise dance studio, four academic classrooms, a conference room and kitchenette, and a collaborative space dance majors can use with musicians, video artists and other students from across the university.

William Murray of Pfeiffer Partners Architects, the principal architect on the project, explained that he viewed the Italianate Collegiate Gothic building as a bridge between the predominant Collegiate Romanesque of the University Park Campus and the late Gothic Revival of the new USC Village, Wallis Annenberg Hall and other more recent buildings.

“This particular strand of Gothic that occurred between these two styles is seen in buildings of the 14th and 15th centuries,” Murray wrote, citing sources of inspiration such as the Doges Palace, several Italian palazzos and Collegiate Gothic buildings at Yale, Wilson College and Princeton. “Existing USC buildings also exerted influence – Bovard Auditorium’s detailing, scale, brickwork and overhang roof, and the stone and brick detailing of the Gwynn Wilson Student Union.”

The building’s main entry has a diagonal orientation to Jefferson Boulevard and the future crosswalk approach from the USC Village. The south building entry draws people from the campus side.

The building’s courtyard, which will be used as a performance space, along with pre-and post-performance functions, is the result of a potential problem converted into an asset. No new structures were permitted over an existing underground Department of Water and Power vault located near the center’s main entry, Murray noted. “This led to the design of an open courtyard located on top of the vault.”

At the ceremony, it was pointed out that the USC Kaufman School of Dance was the first school to be established by an endowment at the university in nearly 40 years. It joined USC’s five other world-class arts schools in architecture, cinematic arts, dramatic arts, music and fine arts/design.

Groundbreaking class takes the stage as the school expands its repertoire of world dance.

The 18 talented dancers are a diverse bunch ethnically and geographically, with 11 states, Canada and Mexico represented.

The choreographer, a professor of dance at USC, will add one work each year for company over the next five years.