Malcolm Gladwell says it takes 10,000 hours to become a master in a field. If that’s true, James Earl Cox III is well on his way.

Four years ago, the USC graduate student, who is studying interactive media and game design, set a goal for himself: He would create 100 games in five years.

With a year to go, he has 71 games under his belt, all viewable and downloadable from his website, just404it.com. He spends between four days and two weeks on each one.

“The first game was a huge step,” said Cox, 26. “It really helped build my confidence.”

He will be recognized for his efforts this month at the IndieCade Festival, a global festival of indie gaming that nominated a game he did with his brother. The festival is at USC and runs Thursday through Sunday.

“He just dives into things and always takes it to another level,” said Tracy Fullerton, a professor in his program and director of USC Games.

Fullerton, who is also an experimental game designer, remembers one of the first times she had Cox as a student. His assignment was to come up with a game that could be played in public. He took the initiative to also enter it in a festival, where it was ultimately played by people.

Cox said the first game built his confidence in designing. And then he kept going. Fullerton said that’s key. 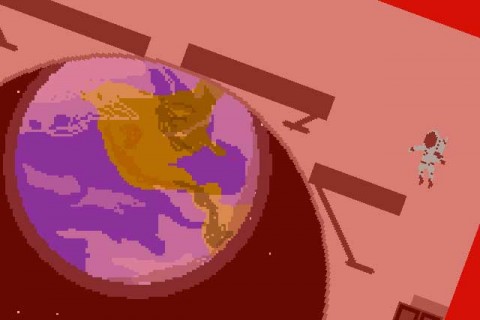 A screen shot from the game Bottle Rockets, designed by James Cox. (Illustration/Courtesy of James Cox)

“James learned something really critical that’s true for all creative people,” she said. “You have to make a lot of different attempts in order to finally land on something truly unique.”

His games also exemplify the teachings of his MFA program, which has an emphasis on narrative storytelling.

Among the designers to come from the USC program: Jenova Chen, the creator of the games Journey and Flow. Emmy-nominated Journey has been heralded for its visuals, score and narrative and Flow was one of the most downloaded games on the Playstation Network in 2007.

Cox’s games are similarly narrative-based. One of his favorites is based on a Civil War short story by Ambrose Bierce called The Occurrence at Owl Creek Bridge. It’s the story of a solider about to be executed.

“When you reach the end of the game, you realize it was a dream,” he said. “It was the last thing he was thinking before the rope was pulled taut.”

What is a game?

He challenges the notion of what makes a game a game.

“You can’t fail this game, which some people discount,” he said. “But it tricks you [into] thinking you can fail.”

Another, called Bottle Rockets, tells the story of a female astronaut trying to escape her space station as it falls out of orbit toward Earth, hearing the voice of her daughter talking to her from home. It’s emotional and was heavily influenced by its score, Alberto Balsam by Aphex Twin.

Since he started, Cox has shown his games at E3 and the Tokyo Game Show, received awards from Serious Play and others, and displayed his games at the Smithsonian Pop-Up Arcade and the National Art Center in Tokyo.

The director of USC Games is recognized for her leadership of the university’s top-ranked game design program, increasing its diversity and expanding its reach.

As games get more sophisticated, they include other perspectives, including those of women and the queer community.