The 2016-17 Spotlight@SDA series started with a bang — make that a big bang — when actor Simon Helberg, best known as Howard Wolowitz on The Big Bang Theory, took the Bing Theatre stage for a conversation with USC School of Dramatic Arts Dean David Bridel.

Helberg, who has garnered admiring reviews for his role as the perplexed piano accompanist to Meryl Streep’s off-key opera singer in the film Florence Foster Jenkins, was witty, self-deprecating and a first-class impressionist.

Not that he came out spouting impressions, it should be said. During the Q&A session, a student made a bold request for some. Helberg’s initial response — “That’ll vacate the theater for sure” — was followed by his excellent takes on Nicolas Cage in Honeymoon in Vegas and Al Pacino in Glengarry Glen Ross.

Helberg got his start doing impressions the usual way — imitating his high school teachers — and moved to specializing in impressions of actors “who went off the deep end.”

Dropping out for auditions 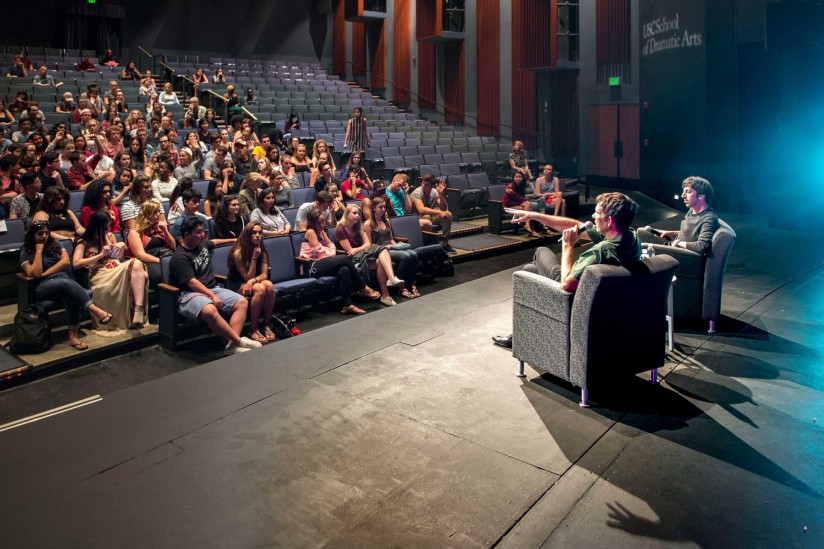 As the Spotlight@SDA program began, the 35-year-old actor recalled that he had met Bridel when Helberg was a college student in New York. His stern drama instructor there who brooked no comedy was suddenly replaced by Bridel, an internationally known expert on clowning, who taught the class “pratfalls and lazzis.” Helberg’s response, he joked, was to say to himself, “There’s a clown college? Why am I at NYU?” and immediately quit school.

The truth of his dropping out of college, he said, was that he was so sure he was going to book one of two high-profile auditions (“they’ll fight over me,” he fantasized) that he secured an agent and left school. Painfully, neither job materialized, although Judd Apatow, the writer-director of one of the projects, did write a small role for him in a film.

So Helberg worked at a restaurant and went on “1,000 auditions.”

He was honest about how discouraging that was.

“Rejection is really, really hard. I was doing great in these auditions and not getting the parts.”

Even though he did start getting work on commercials and television, he estimated that he was unsuccessful in 950 of those 1,000 auditions.

What kept him going was writing and performing sketch comedy and plays in small theaters he would rent for a night. It was literally “pay to play,” but it was a way to keep working.

I’ve played so many nerds in my life. I want to show off the hunkiness!

“I’ve played so many nerds in my life,” he lamented. “I want to show off the hunkiness!” he deadpanned. “You can’t chain the stallion to the stable!”

One pitfall of playing so many nerds, he said, is that TV and film writers sometimes confuse the actor with the character. They assume he can pull coins out of ears, speak Klingon and know trivial details of sci-fi. But Helberg prefers not to have an insider’s knowledge of nerdom.

“It’s nice not to be so close to the Trekkie or science worlds,” he said. “I can see it more objectively.”

Another pitfall is typecasting. “It’s like golden handcuffs,” he admitted. “I’m very happy to get work and play all kinds of odd, alien-type people. But it will be harder for me to play a love interest or a normal human.”

When he was a cast member on Aaron Sorkin’s Studio 60 on the Sunset Strip, he auditioned and won the role (a nerd, natch) on the pilot for The Big Bang Theory. He had to ask Sorkin to be released from Studio 60, which was a bit of a gamble.

“No one could have expected [Big Bang] to be the biggest show on TV,” he said of the CBS comedy now going into its 10th year.

In response to a question, Helberg said he rarely improvises dialogue or suggests lines for his character on the show.

“It’s a relief because the writers are brilliant and you don’t have to worry about your own joke going over. You have someone else to blame!”

The opportunity to act with Streep in a film directed by Stephen Frears (The Queen, Philomena) was a chance to break out of the nerd canon, and it came to him without a formal audition. He received an email with respected casting director Kathleen Chopin’s name on it and assumed it was spam from a Nigerian prince. After he read the script, it was all he could do not to personally beg the director for the part.

“He never laughed at anything I said” and was principally interested in how well Helberg could play the piano. By the end of the meeting, Helberg was passing himself off as a concert pianist, he joked. He had mostly played piano jazz, so he crammed for two days to be able to send a tape of himself flawlessly playing a classical piece.

The thought of working with Streep filled him with “excitement and utter terror,” but once he met her, he was relieved to hear the actress admit she felt as much pressure to perform brilliantly as he did.

“Part of her genius is to completely surrender to what is happening in the moment,” Helberg said. She told him she wants her performance to “be alive.”

“She does something different each time and then she lets it go.” Helberg said he realized that “what we’re being paid for is to go in and not know what’s going to happen.”

He has realized that the best acting comes “when everyone is totally insecure about what we’re doing. If you can embrace that, your work gets deeper.”

So on The Big Bang Theory, that translates to not trying for laughs.

“It’s very hard to trust that you know what you’re doing and not keep thinking ‘Am I good?’ ‘Did I look good?’ ‘Was I funny?’”

The less thinking you do on set, the better, he said. “I’m a big over-thinker, but you should do your thinking at home.”

Helberg’s parting advice was well-received by the dramatic arts students.

“You should learn how to stand on the stage and act, whether you want to do theater or not. If you can be on stage for two hours and tell a story and tell it truthfully with your own body,” you will be prepared for any type of acting job, he said.

Helberg said he’d like to get back to acting in theater. He then waited a comic beat and added: “When I don’t have to pay to be on the stage.”

Over three decades, the actor has tried to disrupt expectations, much like his mentor, Sidney Poitier.

USC calls on the creator of Saul, Breaking Bad

Vince Gilligan, who began his career on The X-Files, reveals how he found his way in TV.

COMMENCEMENT 2022: Nwodim, who made her name in acting and comedy after graduating from USC Dornsife in 2010 with a degree in biological sciences, will speak during the college’s satellite ceremonies on May 13.