On March 6, just shy of his 21st birthday, Kristopher (Kris) Boesen of Bakersfield suffered a traumatic injury to his cervical spine when his car fishtailed on a wet road, hit a tree and slammed into a telephone pole.

His parents were warned there was a good chance their son would be permanently paralyzed from the neck down. However, they also learned that he could possibly qualify for a clinical study that might help.

Enter Keck Medical Center of USC, which announced that a team of doctors became the first in California to inject its patient with an experimental treatment made from stem cells as part of a multi-center clinical trial. 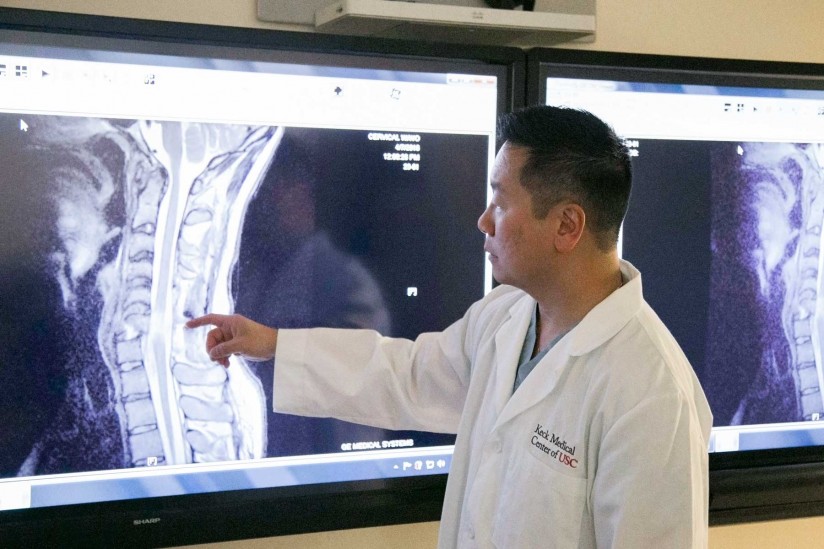 “Typically, spinal cord injury patients undergo surgery that stabilizes the spine but generally does very little to restore motor or sensory function,” Liu explained. “With this study, we are testing a procedure that may improve neurological function, which could mean the difference between being permanently paralyzed and being able to use one’s arms and hands. Restoring that level of function could significantly improve the daily lives of patients with severe spinal injuries.”

Two weeks after surgery, Boesen began to show signs of improvement. Three months later, he’s able to feed himself, use his cellphone, write his name, operate a motorized wheelchair and hug his friends and family. Improved sensation and movement in both arms and hands also makes it easier for him to care for himself, and to envision a life lived more independently.

“As of 90 days post-treatment, Kris has gained significant improvement in his motor function, up to two spinal cord levels,” Liu said. “In Kris’ case, two spinal cord levels mean the difference between using your hands to brush your teeth, operate a computer or do other things you wouldn’t otherwise be able to do, so having this level of functional independence cannot be overstated.”

All I’ve wanted from the beginning was a fighting chance.

Doctors are careful not to predict Boesen’s future progress.

“All I’ve wanted from the beginning was a fighting chance,” said Boesen, who has a passion for repairing and driving sports cars and was studying to become a life insurance broker at the time of the accident. “But if there’s a chance for me to walk again, then heck yeah! I want to do anything possible to do that.”

Qualifying for the study

Because the window for performing the surgery was tight, everything had to go according to schedule for Boesen to qualify.

Once he made the decision to pursue enrollment in the study, dozens of doctors, nurses, rehabilitation specialists and others sprang into action.

Because Boesen would need to provide voice confirmation of his desire to participate in the study, he had to be able to breathe without a ventilator. Weaning a patient from assisted breathing generally is a three-week process. He did it in five days with the help of a respiratory care team. He signed the paperwork and began a week of assessments, scans and other pre-surgery tests.

In early April, a surgical team from Keck Hospital of USC carefully injected 10 million AST-OPC1 cells directly into Boesen’s cervical spine. Nearly six weeks later, he was discharged and returned to Bakersfield to continue his rehabilitation. Doctors reviewed his progress at seven days, 30 days, 60 days and 90 days post-injection, and Boesen can look forward to detailed assessments after 180 days, 270 days and one year.

His parents said they are amazed at the level of collaboration and cooperation that enabled their son to participate in the study.

“So many things had to happen, and there were so many things that could have put up a roadblock,” Boesen’s father said. “The people at Keck Medical Center of USC and elsewhere moved heaven and earth to get things done. There was never a moment through all of this when we didn’t think our son was getting world-class care.”

The pioneering surgery is the latest example of how the emerging fields of neurorestoration and regenerative medicine may have the potential to improve the lives of thousands of patients who have suffered a severe spinal cord injury.

The stem cell procedure Boesen received is part of a Phase 1/2a clinical trial that is evaluating the safety and efficacy of escalating doses of AST-OPC1 cells developed by Fremont, Calif.-based Asterias Biotherapeutics. AST-OPC1 cells are made from embryonic stem cells by carefully converting them into oligodendrocyte progenitor cells (OPCs), which are cells found in the brain and spinal cord that support the healthy functioning of nerve cells. In previous laboratory studies, AST-OPC1 was shown to produce neurotrophic factors, stimulate vascularization and induce remyelination of denuded axons. All are critical factors in the survival, regrowth and conduction of nerve impulses through axons at the injury site, according to Edward Wirth III, chief medical director of Asterias and lead investigator of the study, dubbed “SCiStar.”

“At the 10 million cell level, we’re now in a dose range that is the human equivalent of where we were when we saw efficacy in pre-clinical studies,” Wirth said. “While we continue to evaluate safety first and foremost, we are also now looking at how well treatment might help restore movement in these patients.”

To qualify for the clinical trial, enrollees must be between the age of 18 and 69, and their condition must be stable enough to receive an injection of AST-OPC1 between the 14th and 30th days following injury.

Keck Medical Center is one of six sites in the United States that is authorized to enroll subjects and administer the clinical trial dosage.

The first early data results from a group of patients in this study will become available on Sept. 14.

USC has recruited two esteemed spine surgeons who will play critical roles in expanding a multidisciplinary, academic-based spine center at the Keck Medical Center of USC.

Despite paralysis, Trojan Jack Jablonski is making a name in hockey, the sport he loves

Injured as a high school player, the USC communications major is working off the ice with the LA Kings.