Hashtags, story maps, virtual reality, gifs — these are the tools of the 21st-century diplomat.

For two weeks each summer, U.S. State Department, foreign affairs staff members and others in the international public diplomacy sphere gather on the University Park Campus for the USC Annenberg Center on Public Diplomacy’s Summer Institute.

The intensive 10-day course focuses on many facets of public diplomacy, including strategic planning, assessment tools, crisis management and digital assets, all to improve communication and effective engagement with foreign publics.

The traditional view of diplomacy evokes images of closed-door discussions and handshakes between diplomats and national leaders. The USC Center on Public Diplomacy (CPD) acknowledges that statecraft includes a fair amount of these interactions, but nations and their ministries must take a more global view, recognizing the importance of leveraging a nation’s soft power assets and interacting with multiple actors. 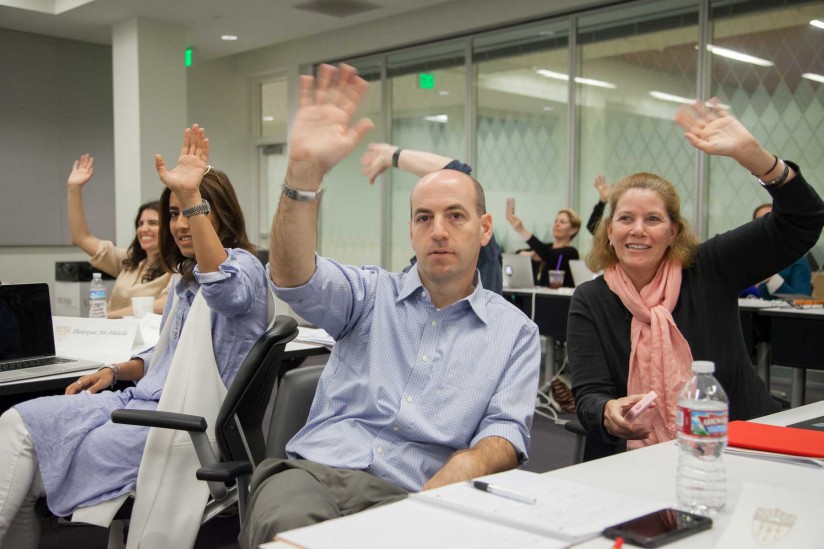 Tatiana Rascovsky, Thekrayat Ali-Abdullah, Eyal Naor and Andrea Appell, from left, wave to a camera during a workshop covering use of video in social media. (USC Photo/Brett Van Ort)

While this may seem simple on paper or in an academic setting, public diplomacy in the modern world is all about disruption — it is incumbent upon diplomats to manage relationships and messaging in new ways, equipped with new tools.

The nature of diplomacy not only calls for but now demands new strategies, according to Jay Wang, director of the CPD.

“Diplomacy has been disrupted by geopolitical shifts and the digital revolution, and is in pressing need of a new mindset and skill set, which is why we developed this signature training opportunity,” Wang said.

Outside of internal professional education programs, CPD is the only institute to offer training like this on the tools needed to communicate and assess a country’s diplomatic effectiveness.

Eyal Naor, chief of staff of the public diplomacy director at the Israel Ministry of Foreign Affairs, has seen this evolution firsthand, which is why his government sends at least one staff member to CPD’s training each year.

As newer and more experienced ambassadors and foreign affairs staff members embrace the capabilities of digital diplomacy, a “new path opens up for the ministry,” Naor said.

Naor and the rest of the institute’s participants engaged in two or three seminars each day, culminating in a final presentation at the end of the two weeks. While classes included general background knowledge on the history and current landscape of public diplomacy, CPD is at the forefront of data-driven evaluation of diplomacy efforts and abreast of the latest tools in storytelling.

For this reason, about a dozen countries send students to the USC training institute annually; Australia sent two foreign ministry staff members to the Summer Institute this year.

Merewalesi Nailatikau is a senior communications manager for the Department of Foreign Affairs and Trade for the Australian High Commission in Fiji. After Cyclone Winston tore through Fiji in February, Nailatikau watched engagement soar on their previously little-trafficked Facebook page.

“We never thought our Facebook page was able to jump to 10,000 ‘likes’ in the space of six weeks,” she said, noting Fiji has a population of less than 1 million. Nailatikau attributes the learning curve she encountered as the impetus for applying to the Summer Institute.

“My challenge is how will I use the examples I’ve seen here and make an argument to use them,” she said. “Now I can point to colleagues from this program who use them really well.”

Educating public diplomacy specialists and connecting with them through the CPD Summer Institute not only helps the individual participants, but also strengthens and expands the reach of the discipline.

The field of public diplomacy is developing quickly, but like many other disciplines these days requires constant re-tooling.

“We are very proud of playing a role in building public diplomacy into a strong and sustainable facet of international affairs,” Wang said. “At the Summer Institute — as in all our professional education programs — we want to make sure that our practitioners are up to speed. More importantly, we provide a safe learning space for experimentation and imagining the future of public diplomacy.”

The Health and Equity Media Collaborative brought 24 young people into the fold this summer to investigate well-being in local neighborhoods.

USC student Ian Solano was the first communications intern in the space company’s history, a unique opportunity for the admitted Star Trek aficionado.