When scientists and engineers at USC talk about the Michelson Center for Convergent Bioscience, they talk about working with their “eyes wide open” and their “heads up.”

They say they’ll have “accidental collisions” that will help their research.

In the words of one: “This is exactly why I joined USC.”

They are talking about a new way of fast-tracking the detection and possible cure of diseases with much more collaboration among their colleagues across the university. 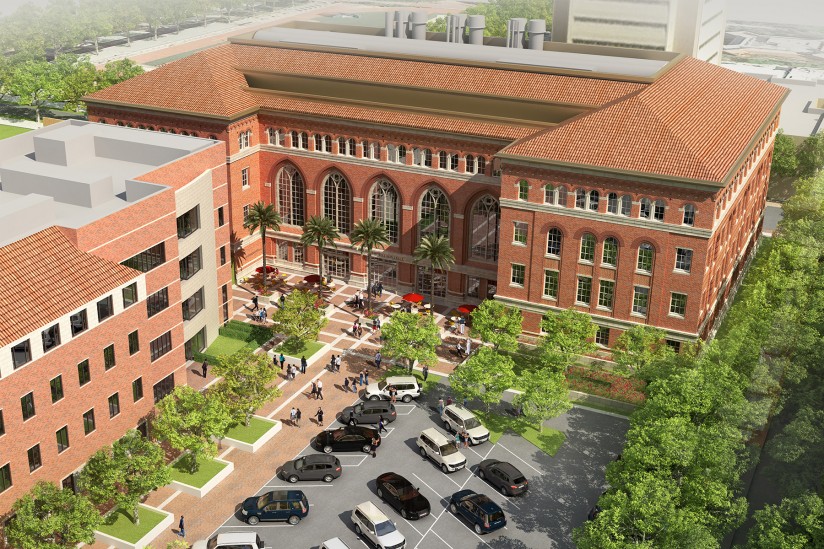 Michelson Hall is scheduled to open in fall 2017. (Artist rendering)

Michelson Hall, under construction near the southwest corner of campus, fittingly sits near the Dornsife Neuroscience Pavilion and the Olin Hall of Engineering. At 190,000 square feet, it will be the largest building within the University Park Campus; it’s slated to open in fall 2017.

“The idea is to bring people together from disparate areas to tackle the world’s most wicked problems,” said Provost Michael Quick. “It’s not a single location; it’s more of a mindset.”

Michelson Hall, created with a $50 million gift from retired spinal surgeon Gary K. Michelson and his wife, Alya Michelson, will have state-of-the-art research facilities and technology.

The four-story building is being designed with open, shared laboratories to encourage partnerships. The basement level will connect to the basement of Ray R. Irani Hall next door. That level accommodates the Imaging Center, Nanofabrication Cleanroom and a low-vibration laboratory, among other things. The building will be able to accommodate up to 60 8-foot chemical fume hoods and two large microscopes.

Faculty and students will address this century’s most daunting health problems, including emerging infectious diseases, cancer and aging. 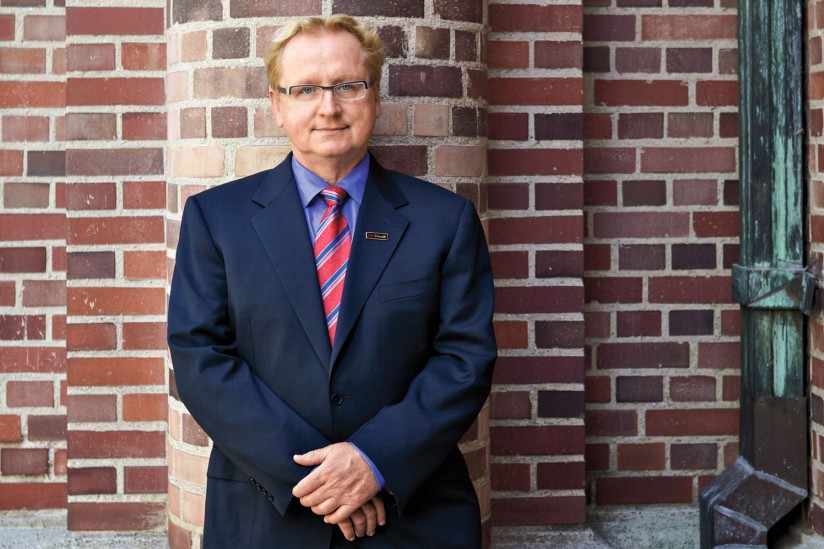 “Our ability to address complex, societal problems will depend not only on technology development but also upon the assembly of highly interdisciplinary teams focused on overcoming the critical roadblocks to delivering better health care,” said Steve Kay, USC director of convergent bioscience. “The Michelson Center for Convergent Bioscience has been created to do just that, to build a unique ecosystem for intensive exchange of ideas, deployment of technology and training of a new generation of problem solvers.”

USC is recruiting existing and new faculty to join the effort. They include those already on campus at the USC Dornsife College of Letters, Arts and Sciences, the USC Viterbi School of Engineering and the Keck School of Medicine of USC, as well as the USC School of Cinematic Arts and the USC Information Sciences Institute.

“The conventional wisdom is to put disciplines together, engineers in one building and biologists in another. As a result, engineers often make great strides toward solving the wrong problems,” said Andrea Armani, holder of the Fluor Early Career Chair in Engineering and an associate professor at USC Viterbi. “By bringing engineers and biologists under the same roof, my group will have a more in-depth understanding of the challenges facing biology and medicine, allowing our research to make a greater impact.”

Peter Kuhn, a world leader in cancer cell biology and a dean’s professor of biological sciences, echoed that view. Traditionally, he said, researchers would work only as far as they could within their discipline. “Outside of that, it’s more of a ‘I’m sure someone else is working on that’ attitude,” he said.

But convergent bioscience changes that approach. Integrating the physical and life sciences with engineering “increases the pace and decreases the cost of doing experiments that other people think are impossible,” said Scott Fraser, Provost Professor of biomedical engineering and biological sciences. Interacting with others outside his field will allow Fraser “to define what I want to do in terms a non-specialist can understand, and allows me to shape my new ideas from the feedback of those who are outside.”

Like Fraser, other scientists and engineers say the work they are doing is the exact type of interdisciplinary research that will make USC a leader in the field.

“We have the right critical mass to pull off the vision of convergent biosciences and continue to attract more amazing researchers to this effort,” said Ellis Meng, chair of biomedical engineering. “I think the timing is right for us to do it here and now.”

The pioneering center will bring together interdisciplinary teams to better understand human health and develop new life-saving devices and therapeutics.