Most people at USC wouldn’t recognize the name Warren Straley.

But they’ve likely touched his work.

Straley has been a USC employee for 50 years and spent the majority of his time — 45 years to be exact — as a university locksmith for Facilities Management Services.

He’s been there to bail out a president who broke the lock on his front door.

He re-did all the keys for buildings on the University Park Campus during the 1984 Olympics.

And if needed, he could pick a safe.

And although Straley says he wouldn’t touch a lock after he retires, he does think an awful lot about keys.

When asked how the campus has changed since his first day on Sept. 7, 1965, he measures it in keys.

“It’s really changed big time,” Straley, 79, said. “There was only about maybe five or six of these cabinets of keys when I started. Now it keeps on growing because the campus keeps on growing.”

Dozens of drawers line the walls of his workshop in a building a short walk from UPC. There are keys to every office on campus, every lab, every desk.

Straley spent the bulk of his career as a locksmith on the Health Sciences Campus, but he started the trade at University Park and has been back at UPC a couple years now. 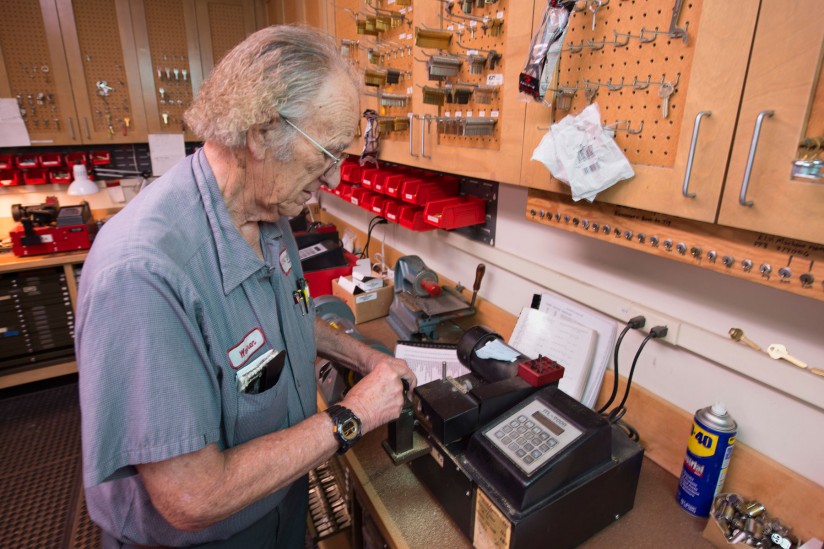 Straley at home in the lock shop (USC Photo/Gus Ruelas)

Denise Conine, his supervisor, has known Straley about 20 years. Before she started at USC nine years ago, she would see him at Security Locksmiths of America meetings, where area locksmiths meet to learn about different products and talk about issues they’re facing.

“Everyone knew Warren knew his stuff,” she said. “You couldn’t pull anything over on him.”

Conine said Straley takes his job seriously as a gatekeeper to the school.

Straley now works eight hours a day, waking up at 4 a.m. at his home in El Sereno and getting to work by 7 a.m.

Straley could have retired nearly 20 years ago, but he didn’t.

Besides loving the people, he said the job is a necessity for him and his wife to continue traveling the world — they’ve been everywhere but Asia and Australia. He also wants to keep his membership in the Golden Bears, a group he shoots with at Triple B, a shotgun shooting range in South El Monte. He said they’re both pricey hobbies for a retiree.

Conine said his zest for life impresses her.

“He’s been to Russia. He’s supposed to be going to Antarctica this year,” she said. “I told him to bring me back a penguin. He’s gone all over the world. It’s amazing.”

Pedestrians and bikes, skateboards or electric scooters can be a dangerous mix. A two-day event this weekon at the University Park Campus aims to help everyone stay safe.

The board has started implementing several community initiatives as part of an ongoing discussion on DPS’s role at the university.

The locksmith who holds the keys to USC’s kingdom