Daniel Hojoon Kim, a junior majoring in neuroscience, is determined to become either a neurologist or a neurosurgeon. This summer, he took another important step on his path to realizing that cherished goal when he joined the laboratory of Dion Dickman, assistant professor of biological sciences at the USC Dornsife College of Letters, Arts and Sciences. 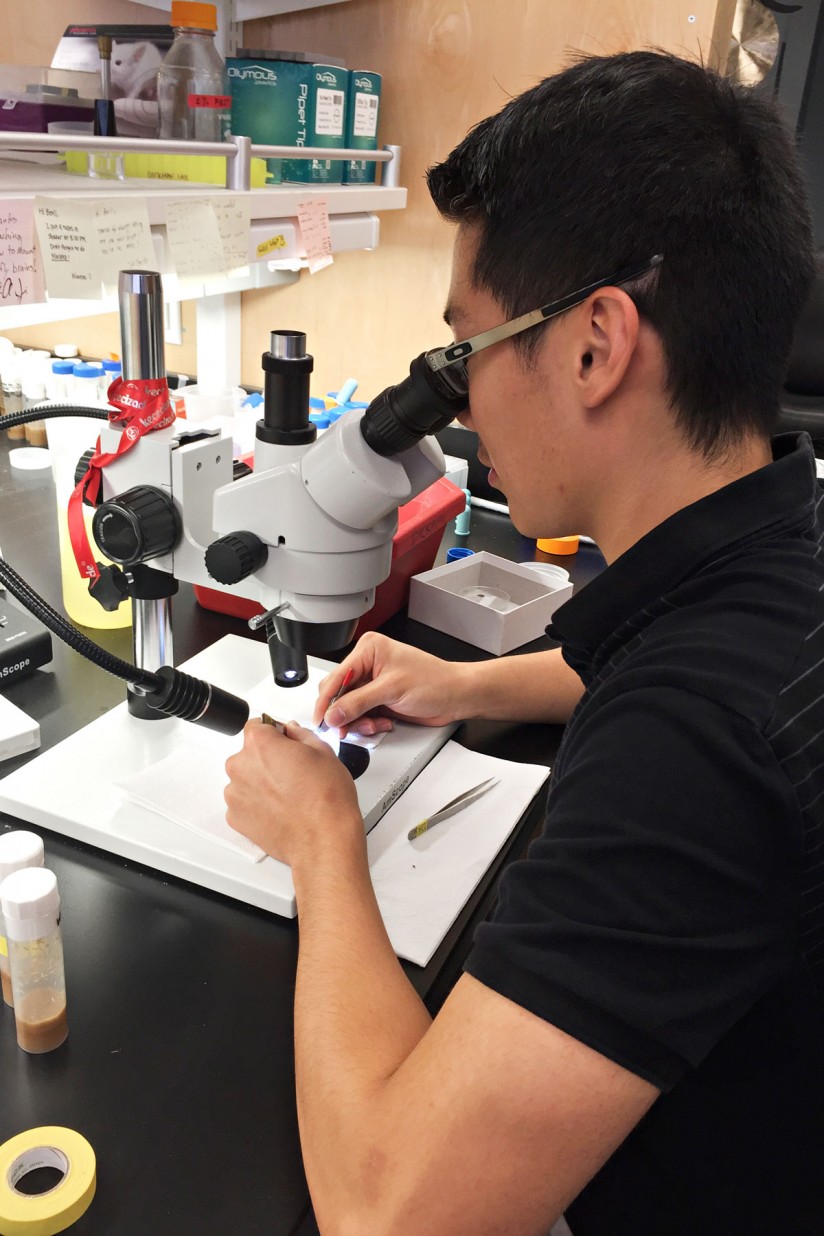 USC junior Daniel Kim is one of the undergraduates to benefit from funding. (Photo/Courtesy of Daniel Kim)

“We study how synapses develop and function in general, and, in particular, the remarkable plasticity of synapses, which allows them to change in structure and function,” Dickman said.

Synapses are the fundamental units of nervous system function. So any defects in synaptic structure or function, or in their plasticity and ability to change, likely contributes to a variety of neurological and neuropsychiatric diseases, including schizophrenia, bipolar disorder, epilepsy and autism spectrum disorder.

Dickman’s research may, in the long run, have therapeutic potential for treatment of such diseases.

Kim joined Dickman’s lab because of his interest in discovering how the nervous system functions and stabilizes itself, perhaps adapting to, and preventing, neurodegenerative diseases. He was able to spend the summer working with Dickman and his team, amassing experience he describes as “invaluable,” thanks to support from the Summer Undergraduate Research Fund (SURF).

“It’s this hands-on reinforcing that I love in the field of research,” Kim said. “You’re not just in class learning about an experiment; you’re actually doing it yourself, reviewing the results, thinking critically about why or how they occurred and how to resolve any issues or discrepancies.”

To conduct his research on synapses, Dickman uses the recently developed MiMIC (Minos Mediated Integration Cassette) Library. Created by Hugo Bellen at Baylor College of Medicine in Houston, the library maintains about a thousand Drosophila melanogaster (fruit fly) genes, each tagged with green fluorescent protein (GFP) at its genomic location. GFP is a gene taken from jellyfish that expresses a protein that glows bright green when placed under blue light.

“The genetics of a fly are very similar to that of a human,” Dickman said. “So studying Drosophila is a great way for young scientists to do real laboratory research and learn how genetics actually works.”

Dickman’s team orders flies from the MiMIC Library with certain GFP-tagged genes that it knows — or suspects — function at synapses.

“First we look at whether we can see green fluorescence at synapses that would indicate that the gene we are interested in actually is expressed and localized to the synaptic structures that we’re interested in,” Dickman said. “If it is, we try then to manipulate those genes and proteins in ways that help us understand their functions at synapses.”

Dickman’s lab is renowned for its work on a process called homeostatic synaptic plasticity, an adaptive process that keeps the brain functioning at stable levels despite the perturbations that may impair synapses during development, aging and disease. For example, uncontrolled synaptic activity can lead to the kind of seizures seen in epilepsy. Dickman and his team study the mechanisms that maintain stable synaptic function by trying to identify genes, that when mutated, lead to homeostatic dysfunction at synapse.

“The human version of one such gene that we identified in flies is implicated in schizophrenia and bipolar disorder,” Dickman said. “So one contributing factor to psychiatric diseases like schizophrenia in humans may plausibly be related to defective homeostatic plasticity. We are therefore keenly interested in identifying genes that function at synapses to control and stabilize their activity.

“Many drugs that we know and that are being developed can target this ability of synapses to adjust their strength and, perhaps, compensate for defective homeostatic control of their activity,” Dickman said.

“We hope that what will emerge from this field will be a better understanding of these diseases and, ideally, better therapeutic ways of intervening to treat and prevent them from happening.”

Using DNA samples compiled by USC, the team will create the most comprehensive resource to date on the disorders.

Genes and pathways identified by the international study could inform new approaches to treatment.

Characterized by hallucinations, delusions and gross disorganization of thought and speech, schizophrenia is a chronic, severe and disabling brain disorder.