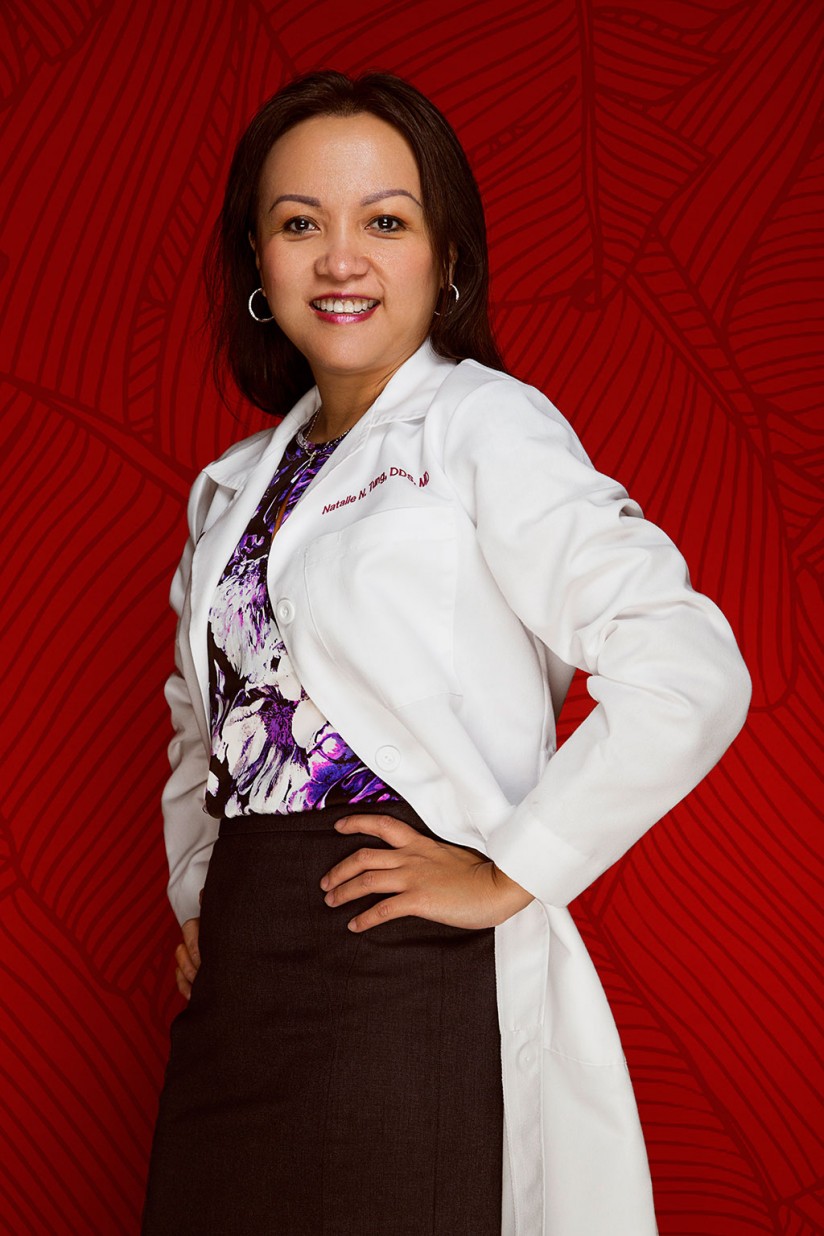 Like most people, Natalie Tung would get squeamish at the sight of blood.

“Every time I would see or smell blood, my mind would instantly revert back to a horrible childhood memory of seeing someone’s leg get amputated without anesthesia,” said Tung, who grew up in Vietnam.

While most can often avoid the object of their fears, Tung had a dream that would require her to face her’s head on: She wanted to become a surgeon.

Tung uses the story to motivate her students, encouraging them to let nothing get in the way of pursuing their dreams.

The 35-year-old daughter of Vietnamese immigrants who went on to become a Harvard-educated oral and maxillofacial surgeon and assistant professor of clinical dentistry at the Herman Ostrow School of Dentistry of USC is certainly a case study in tenacity.

A love for learning

Tung lived in Vietnam until immigrating to the United States when she was 9. Her mother and father — both teachers in Vietnam — found work at a dental lab and a printing company, respectively, to afford to live in Orange County.

A lover of learning from way back, Tung prospered in school. She was the valedictorian of her high school class.

“I’m very proud of that,” Tung said, “because the year I graduated, there were seven Vietnamese valedictorians across Orange County.”

After high school, she moved to Northern California to attend the University of California, Berkeley. During college, Tung, who had her heart set on becoming a pediatrician, worked for an ophthalmologist.

“Across the hallway from the ophthalmologist’s office, there was a pediatrician,” Tung said. “I’d always hear all these kids crying, and I thought, I don’t think I want to do that for the rest of my life!”

At that point, Tung began looking into dentistry.

“My mom said, ‘You know it’s a great lifestyle. You get to be your own boss. You don’t have to work five days a week. You can have a family life.’”

With that, Tung pursued a doctor of dental surgery degree at UCLA, with an eye on going into oral surgery.

I felt that surgery would be the most challenging for me — both from the physical and emotional perspectives.

“I’m such a type-A person that I like challenges,” she said. “I felt that surgery would be the most challenging for me — both from the physical and emotional perspectives.

During dental school, Tung married one of her classmates.

The couple welcomed their first child during Tung’s fourth year in dental school.

“I have a picture of my baby son on my shoulder at graduation,” said Tung, who had finished her requirements early and was spending the last days of dental school studying for her board examinations.

After graduating, she moved to Boston, where she completed a yearlong internship before entering Harvard University’s oral and maxillofacial surgery residency program.

The program is highly competitive. Tung said hundreds apply each year, but the program only accepts three, one of whom is typically a female.

“When you’re accepted into a residency at Massachusetts General Hospital [where Harvard’s program is housed], you are not female or male,” Tung said. “You just do your best as a resident.”

“For the average person, medical school is very busy, but for those of us who’d been through oral surgery, it wasn’t very busy. It’s more like a vacation,” Tung said, with a laugh.

Women can have it all

During Tung’s final year of residency — the busiest, at 120 hours per week — she became pregnant with her second child.

“I was operating in the O.R. for eight hours standing on my feet when I was in my third trimester,” she said. It was, in fact, right after finishing a six-hour surgery that Tung’s water broke. She had to rush herself to the hospital and have an emergency cesarean section to deliver her second son.

Tung said she was able to have it all — a husband, children and a thriving career — because of the support she got both from her spouse and her in-laws, who often helped care for her children.

“We are now living in a world where it doesn’t have to be a male breadwinner and a female stay-at home mom,” she said. “Roles can reverse.”

Tung’s job at USC began in 2014 after Mark Urata ’85, DDS ’89, director of the dental school’s then new division of oral and maxillofacial surgery, asked her to come aboard.

I don’t just show up to work. I’m going to make this place better.

“He convinced me that he has a vision, and I bought into that vision,” Tung said. “I have a vision, too. I don’t just show up to work. I’m going to make this place better.”

“When I first started here, there were probably 10 people interested in oral surgery — now there are about 50,” she said.

Tung also tries to use her own experiences to motivate her students, particularly the women.

“Several of the older female students often ask me, ‘If I do oral surgery, I’ll be like 30-something when I’m done. When do I start a family?’ I tell them, ‘You can do it. It’s all doable,’” Tung said, pointing to her own career.

“I think the world’s changing, and we have shown that we can be what-ever — surgeons, deans or even future presidents.”

The risks of antidepressant use during pregnancy

USC researchers are investigating how a popular antidepressant interacts with pregnant women’s genes to cause craniofacial birth defects.

The mobile clinic collaboration offers comprehensive care for homeless and at-risk veterans, ensuring that they are cavity-free, infection-free and pain-free.