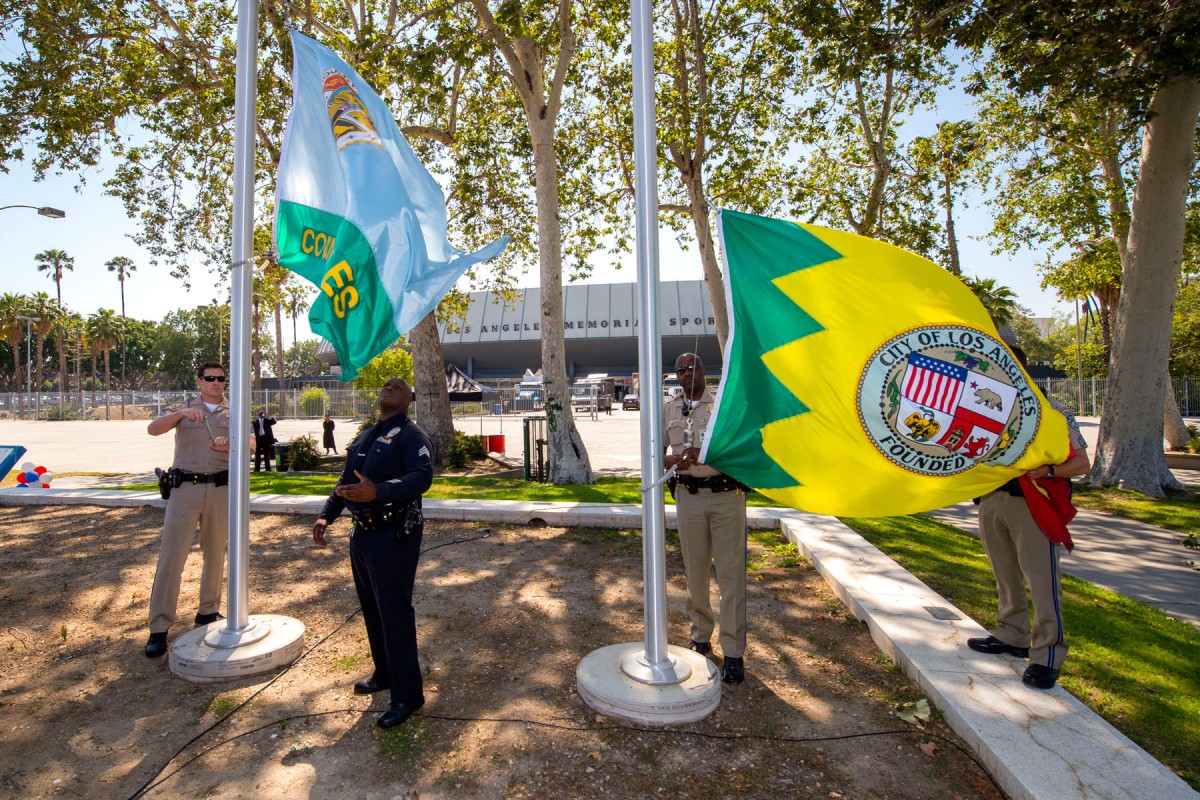 The city and county flags are lowered at Thursday’s closing ceremony for the Sports Arena. (USC Photo/Gus Ruelas)

USC joined in saying a fond farewell Thursday to the Los Angeles Memorial Sports Arena, the venerated venue that has hosted countless games, concerts and special events, including 47 seasons of USC basketball.

“We gather here today to say goodbye to this venerable facility,” county Supervisor Mark Ridley-Thomas said during Thursday’s ceremony in front of the arena, which will be replaced by a soccer stadium. “It’s only fitting that we give it an appropriate sendoff.”

Dedicated in 1959 by then-Vice President Richard M. Nixon, the Sports Arena has been home to the Lakers, Clippers, Trojans and Bruins basketball teams as well as hockey’s Kings. 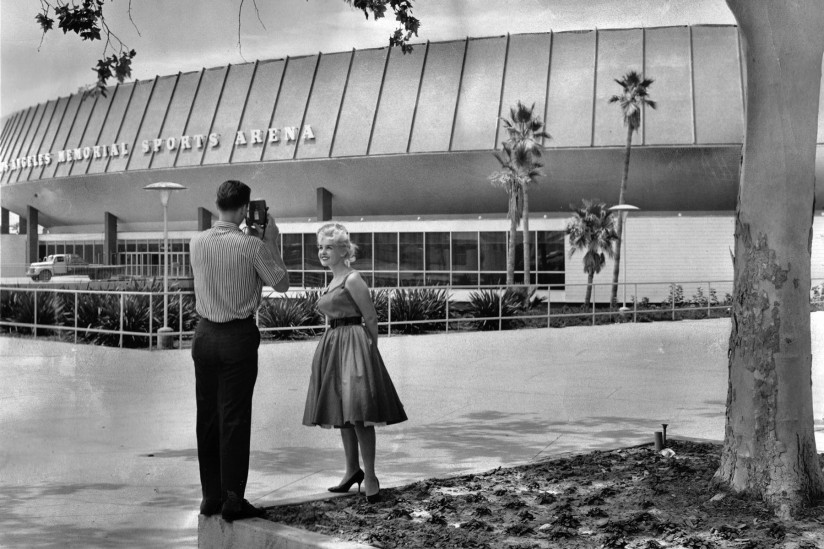 The Los Angeles Memorial Sports Arena is seen in 1961. (Photo/Courtesy of USC Libraries)

It hosted Olympic boxing, the NCAA men’s and women’s Final Four and the NBA All-Star Game. It’s been the site of WrestleMania, American Gladiators and lingerie football. And it became a favorite concert venue, hosting multiday stands by Pink Floyd, U2, Michael Jackson, Madonna and the Grateful Dead.

Bruce Springsteen’s March concerts were the last public events in the hall that the Boss calls “the dump that jumps.”

Perhaps its most historic moment, former Los Angeles City Council member Tom LaBonge noted, was as the site of the 1960 Democratic National Convention that nominated John F. Kennedy for president.

“The history is here. That is great. But transformation is also great,” LaBonge said.

The arena will be replaced with a 22,000-seat, state-of-the-art soccer stadium to be built by the new Los Angeles Football Club. The soccer facility is expected to bring jobs and economic growth southward along Figueroa Boulevard.

The Sports Arena, like the adjacent Los Angeles Memorial Coliseum, is dedicated to veterans, so it was fitting that Thursday’s ceremony concluded with an honor guard lowering the city, county, state and U.S. flags and presenting them to officials in attendance.

Though closed, the Sports Arena will still have at least one more day in the sun: As the closing ceremony was taking place in front of the arena, inside movie crews were working on a feature film set in the early 1970s. Dozens of extras milled about dressed in crazy clothes reminiscent of the Sports Arena’s heyday. 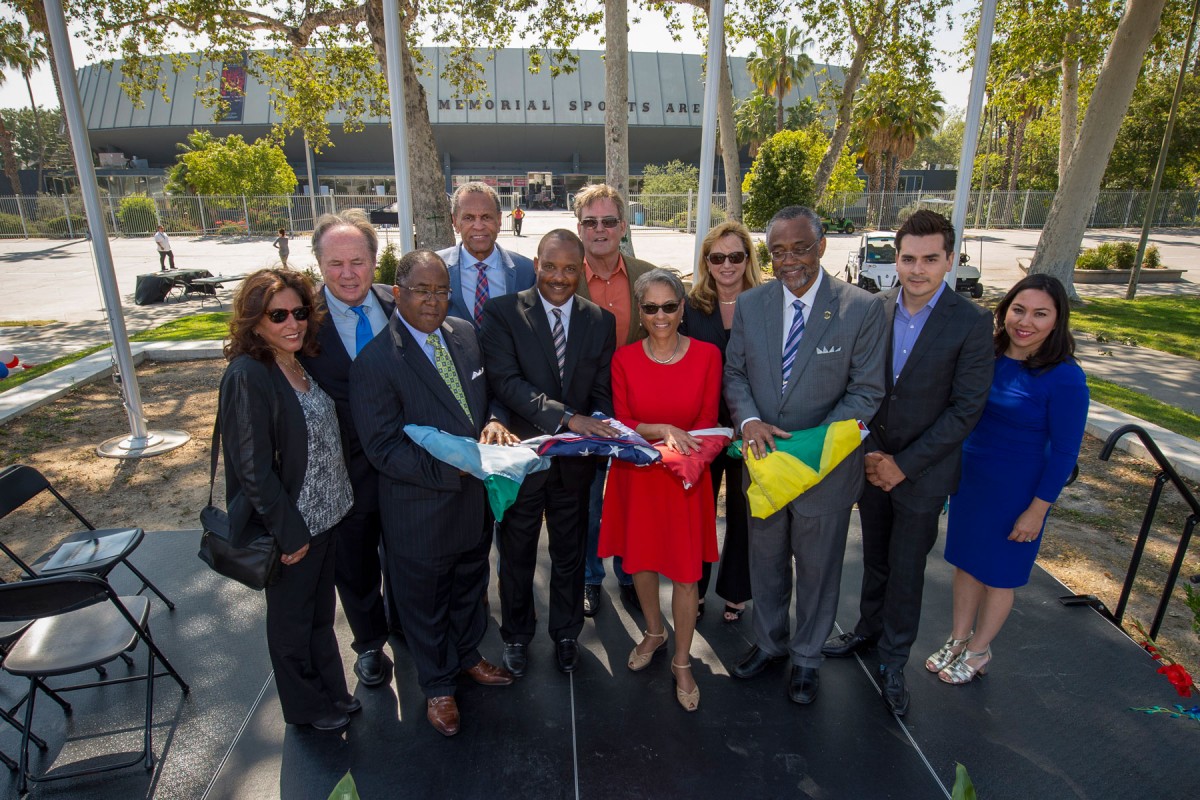 As a senior, he was named the team’s Most Inspirational Player. He also played a season each on USC’s football and baseball teams.

The three-time letterman went on to the NBA, where he was named an all-star five times.

The Pac-12 Conference presidents and chancellors on Thursday voted to resume athletics practices and competitions for the football, basketball and winter sports seasons.