The Spirit of Troy's newly unveiled headquarters include practice rooms, lockers and a display of band helmets through the ages. 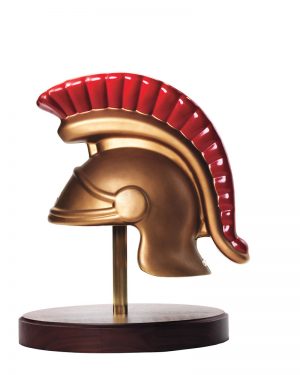 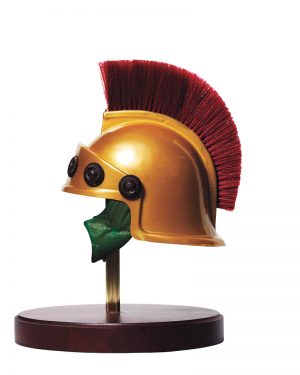 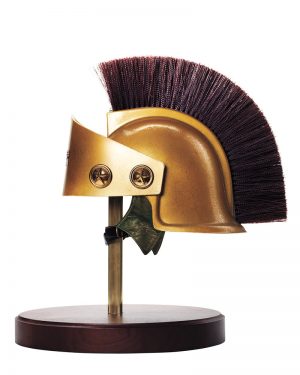 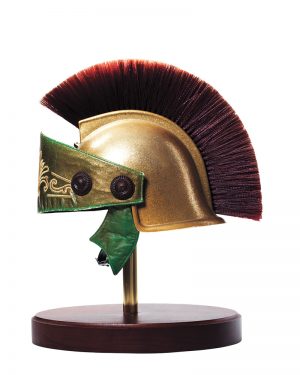 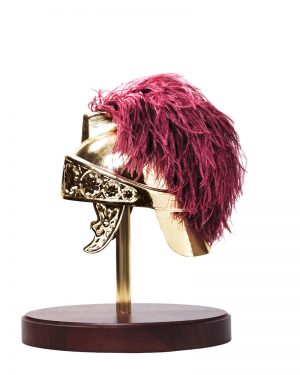 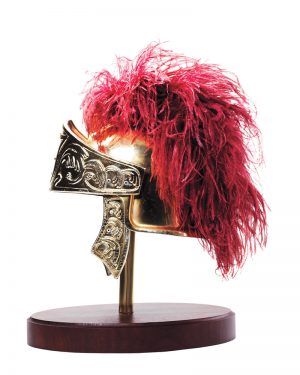 When USC Trojan Marching Band Director Arthur Bartner joined the university in 1970, the band was scattered across campus. Uniforms were stored in one area, large instruments in another. He managed to snag the basement of Stonier Hall in 1995, but the program soon outgrew the narrow, cramped space.

Two decades later, The Spirit of Troy finally has its own home on the second floor of the Lyon Center, in the Dr. Arthur C. Bartner Band Pavilion. The space was named through a gift from Stephen Johnson ’80 and Rosemarie Torres Johnson ’82, and includes bigger lockers (with a shelf for sunglasses), a rehearsal hall, a lounge and storage dedicated to uniforms and larger instruments.

“You can feel the energy. This is our new home, with all the bells and whistles,” Bartner says. A nook above the rehearsal area allows Bartner to survey and direct the ensemble. Murals fill the walls and helmets from past years are on display.

Alumni and friends of the band are already competing for naming opportunities to help fund the space. Donors have snapped up sponsorship of rooms like the lounge, men’s locker room and pantry.

“There’s a certain feeling of fulfillment that is very satisfying,” says Bartner, who is closing in on half a century helming the band. “I have a feeling that my mission is now complete.”

Scroll on for a tour of the band’s headgear through the ages, and learn more about the band’s history on the TMB website.

Drop by the lobby of the new band pavilion and you’ll find a display of helmets that trace The Spirit of Troy’s rich history. As one of the most famous and visible ambassadors of school spirit, the USC Trojan Marching Band and its distinctive look has evolved over the years as its entertained millions of fans. 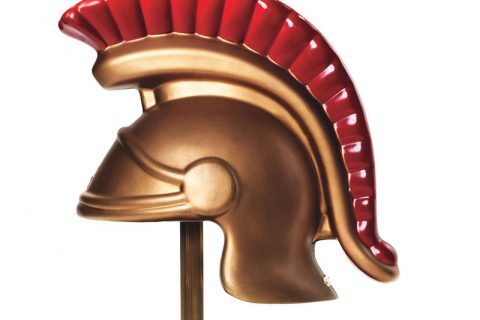 In an effort spearheaded by Tommy “The Toe” Walker ’48 (the legendary drum major who also doubled as a placekicker for the football team), the band switched from maroon uniforms and caps in favor of a look unique to USC — a Trojan warrior. The helmet was molded from one piece of painted plastic. 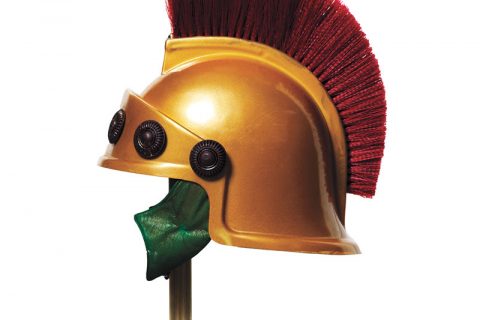 Women were allowed to join the band in 1971 (it had reverted back to being an all-male group after World War II), and the band’s tall flags and colorguard group—now called the Silks—also made their official debut that year. The Spirit of Troy’s new uniforms and headgear debuted the following season. Helmets were topped with a bristle plume and included faux leather chin flaps (now green with age) and small button-like shields on the molded visor. The updated uniforms were created by the Walt Disney Co. and included bright cardinal and gold capes over jackets decorated with a Greek key design. 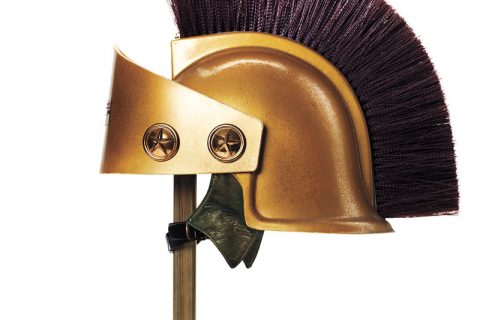 Two similar versions of this brush helmet were introduced in 1980 and were used at the same time. Freshmen and sophomores were given this model, which had a hard visor. Older band members fought for the embroidered visor that had darker embellishments and longer chin flaps. 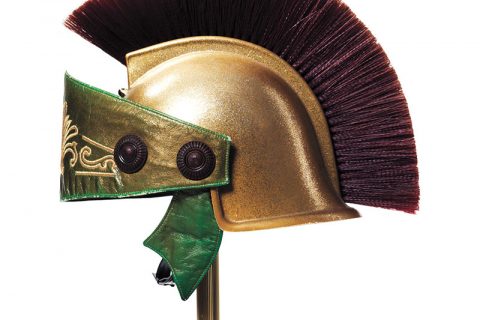 A new set of uniforms and helmets were unveiled during the Homecoming game against Arizona State to celebrate the 100th anniversary of USC’s founding. It was also a special day in band history: During halftime, Fleetwood Mac presented band director Art Bartner with a platinum record honoring USC’s collaboration on the hit song Tusk. The updated outfits included jackets emblazoned with a Trojan head and a footwear change to white spats. Two helmet models were used; this version included a soft visor that was a departure from previous models, though it still had a thick bristle plume. 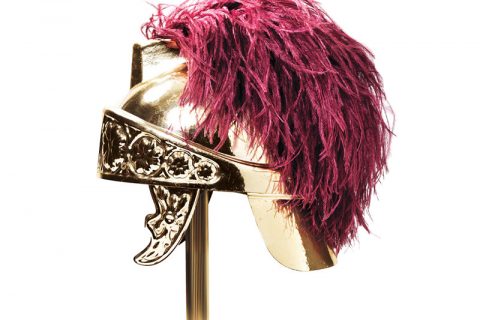 A fresh look made a dramatic debut during the Notre Dame game: the band wore the old uniforms for the first half of the game and then marched out during halftime in the new set. Jackets had larger white shields on the front, capes were longer and the headgear had feathery plumes and a high-shine finish. 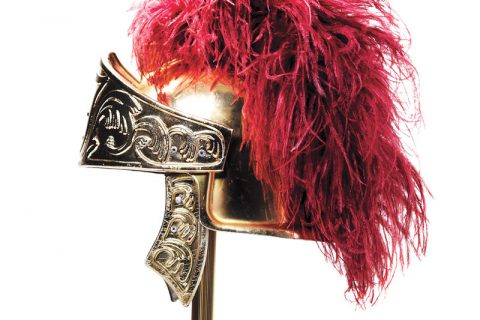 This helmet is still used today as part of The Spirit of Troy’s signature look. It incorporates a few key upgrades to the 1986 version for better comfort and durability. The interior is fitted with an adjustable hardhat suspension system, which offers stronger (and cooler) head protection. The embossed visor is sturdier, chin straps are larger and more substantial and the plume is fuller. The design also accommodates another recent headgear essential: a red USC baseball cap, which members wear backward under the helmet. (Why? So that band members can remove the helmets and still look uniform wherever they are.) 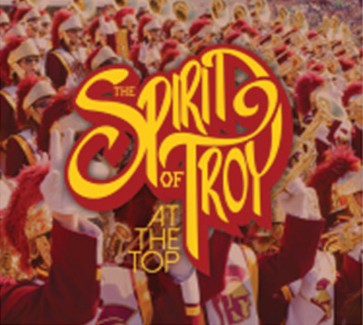 Take a musical tour of the Spirit of Troy's discography. 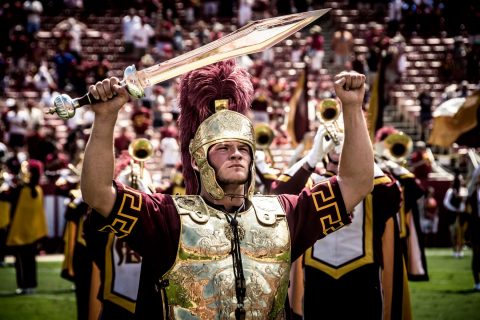