Vintage menus can serve as maps of a long-ago city—colorful culinary guides that reveal the politics, economics and sociology of eating. Josh Kun, associate professor at the USC Annenberg School for Communication and Journalism, worked with his students, chef Roy Choi and Los Angeles Public Library librarians to comb through the library’s collection of more than 9,000 menus—some dating back more than a century—to create the book To Live and Dine in L.A.: Menus and the Making of the Modern City (Angel City Press). A companion exhibition took place at Los Angeles’ Central Library.

“Menus and restaurants are mirrors and mementos both. They are keys to understanding a city and its people,” Kun writes. Here, he orders up some of his favorites: 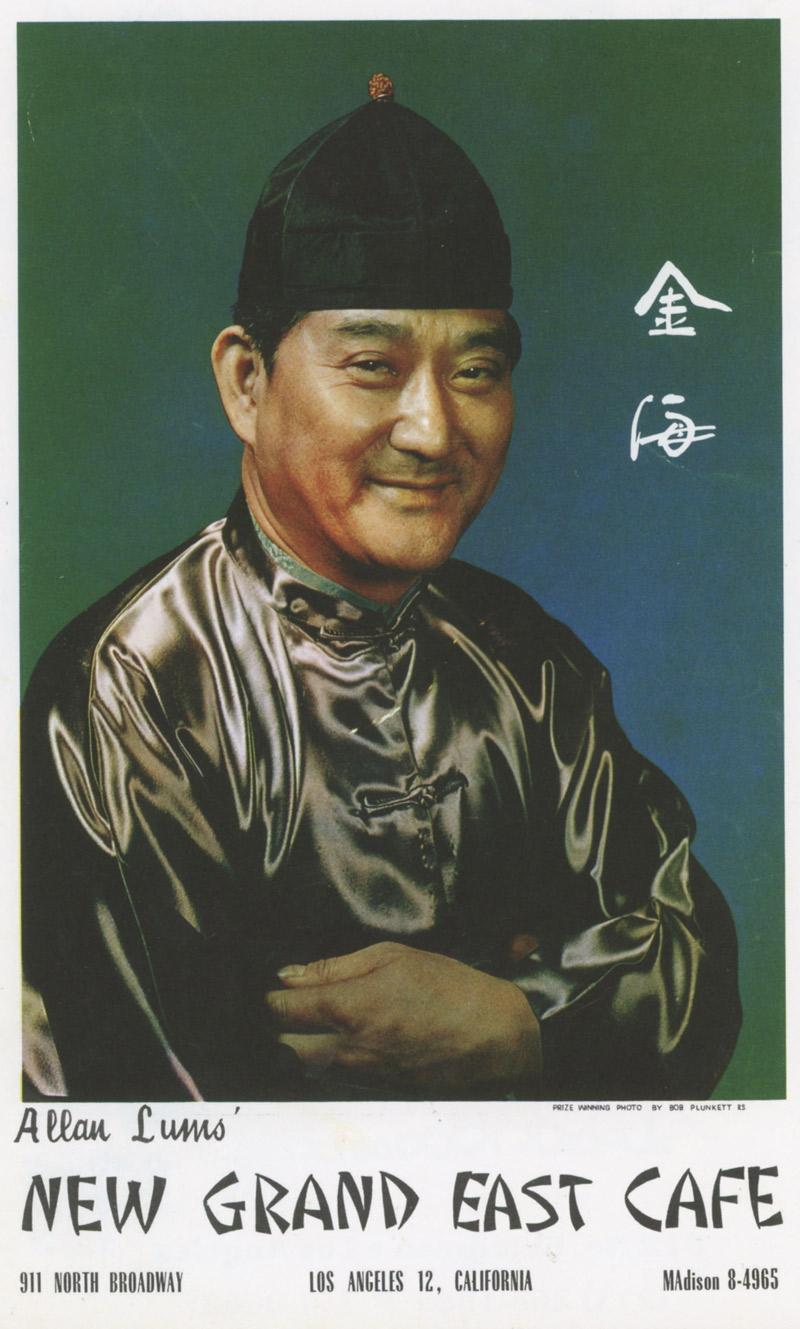 “Restaurants were key to the making of ‘New Chinatown’ as a commercial and residential district. Allan Lum was one of many Chinese and Chinese-American restaurateurs who put their own images on their menu covers to make their ownership clear and to counter the stereotypes that had long been used to market Chinese restaurants.” 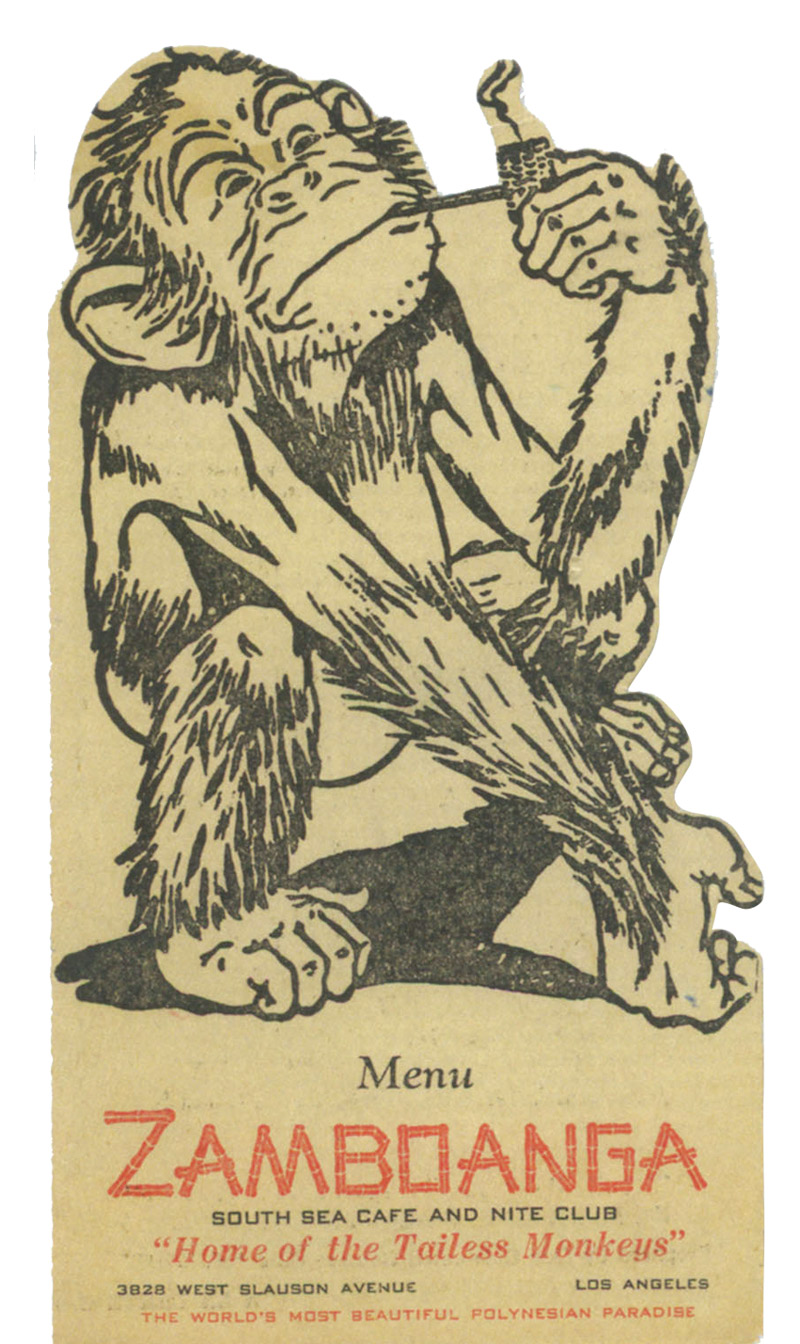 “One of the city’s earliest ‘South Seas’-themed clubs and restaurants, the Zamboanga opened on Slauson Avenue in the 1930s full of exoticizing ‘tiki’ motifs that attracted Hollywood celebs. To live up to its Philippines namesake, it put a die-cut of a pipe-smoking monkey on the cover of its tiny menu—now a classic image of LA menu design.” 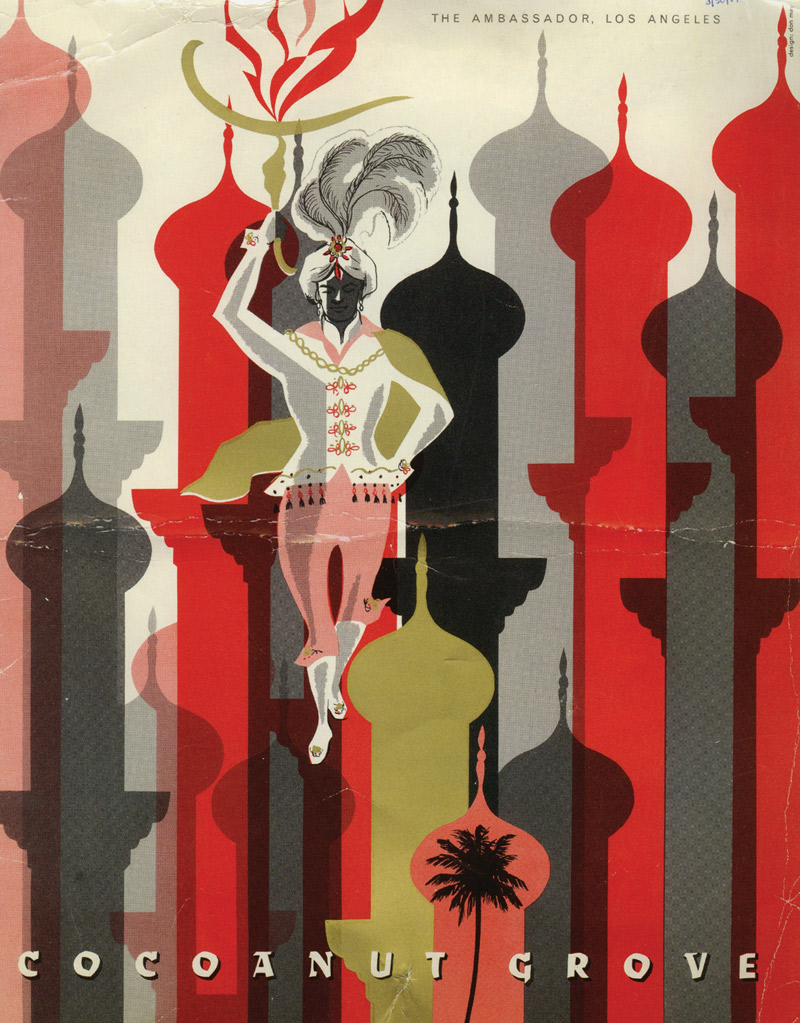 “Thanks to its star-studded clientele, the Cocoanut Grove nightclub—opened in the Ambassador Hotel in 1921—epitomized Hollywood glamour and fantasy. The menu by Hilton designer Don May matched the club’s Moorish-inspired interiors and captured an ambience that celebrities couldn’t resist: the allure of a tropical escape.” 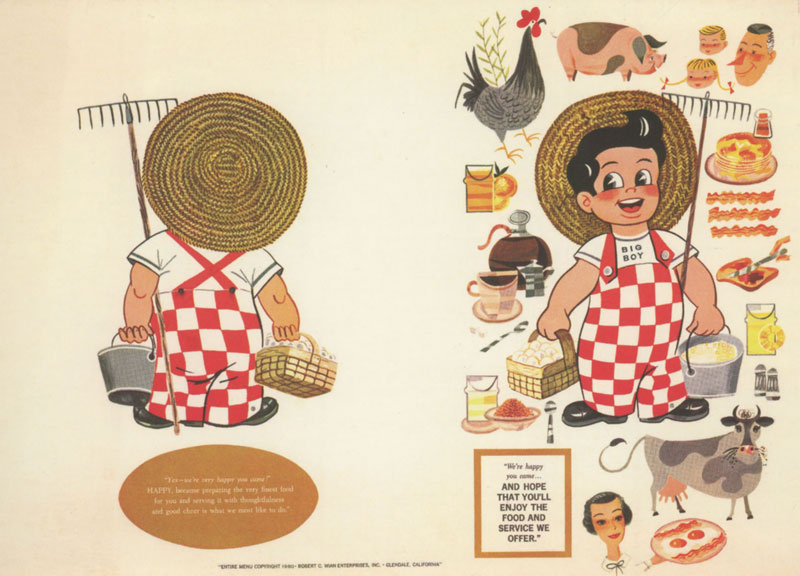 “The Lord Printing Company in Los Angeles was the only one in the nation to focus exclusively on menus. Located on Beaudry Avenue, Lord was a ‘daily menu press’ for most of the last century. For the Bob’s Big Boy chain, it would print blank templates like this to be filled in with the daily and weekly dishes.” 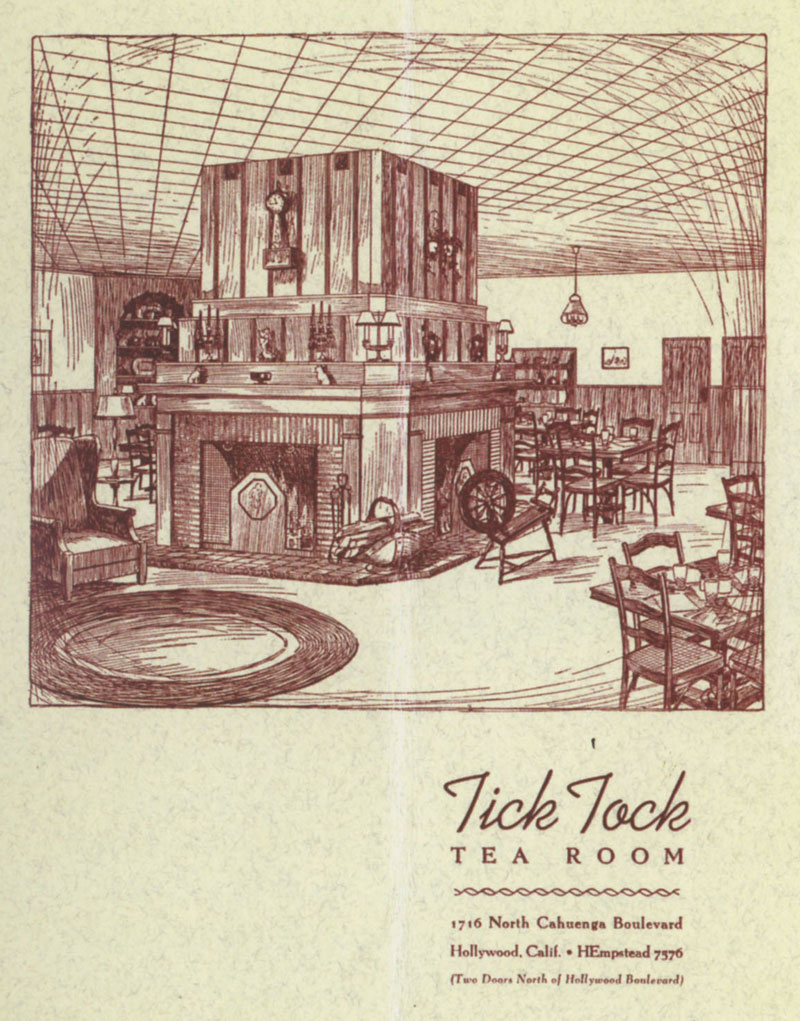 “‘The most successful tea room,’ wrote The Journal of Home Economics, ‘is the one that preserves the atmosphere of a pleasant, well-ordered home.’ That was the aim of the Tick Tock Tea Room, opened in 1930 by Helen and Art Johnson. They served individual pot pies and pot roast with homemade noodles in a room she designed as a replica of the Minnesota living room they left behind: cuckoo clocks, fireplaces, fresh flowers and all.” 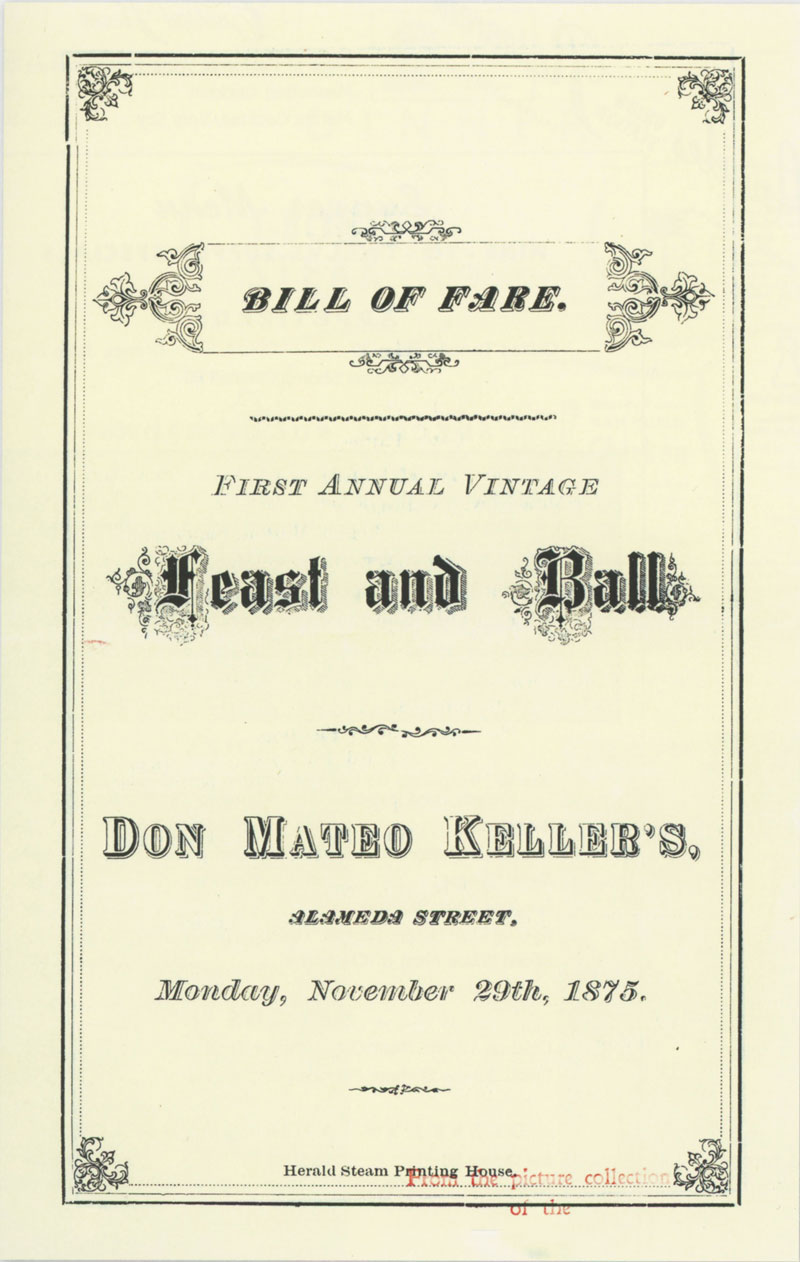 “The earliest menu in the library’s collection is for a banquet thrown in 1875 by Matthew ‘Don Mateo’ Keller at his winery on Alameda Street that offered curried pig’s feet and steak and kidney pie. Dining out then was not that common and mostly a privilege of the wealthy, and there were more printed banquet menus than restaurant menus.”

Menus from the exhibition: 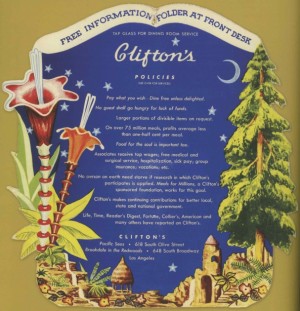 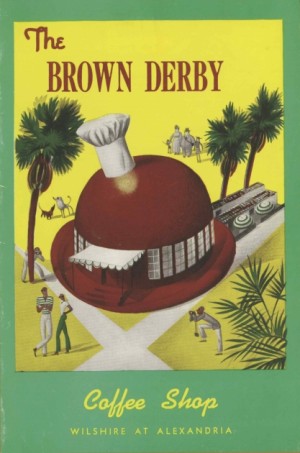 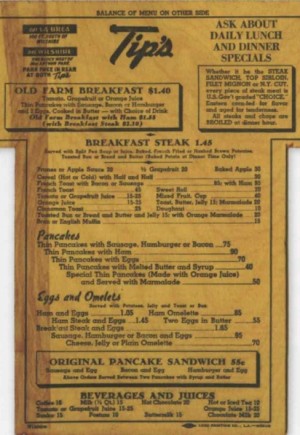 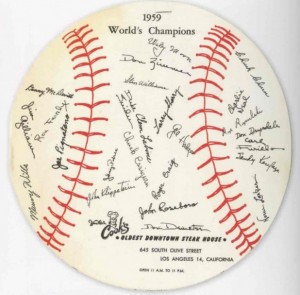 Images from the collection of the Los Angeles Public Library.