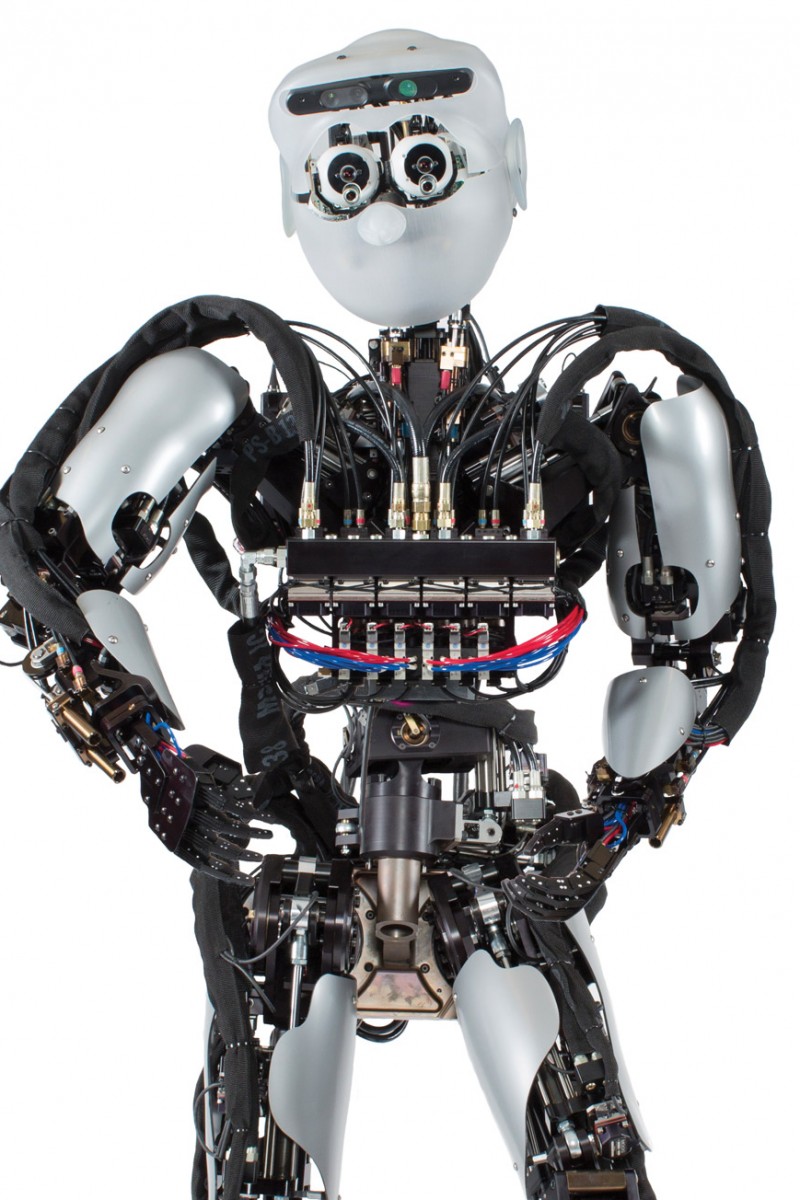 The robots that inhabited the sci-fi world of the late Isaac Asimov were programmed to avoid hurting humans. Now his 20th-century fiction is turning into 21st-century fact, but there’s a twist. It’s not enough for many of today’s real-life robots to avert human harm. They’re being created and coded to promote human health.

These robots can be gentle and funny. Sometimes they’re downright cute. Ultimately, they’re helpful. It’s a robot revolution, and USC engineers and innovators play a leading role in it, recruiting automatons to support the well-being of the young and old.

There’s a reason to enlist technology in the effort. In part, as the U.S. population ages and the volume of patients in need of support surpasses the number of human caregivers, robots are at the ready to close the gap. In hospitals and homes, these machines may soon do everything from encouraging stroke victims to exercise their limbs to serving as eyes for people whose sight has been impaired by diseases of aging. They’re also under study as a potential way to help children with autism. 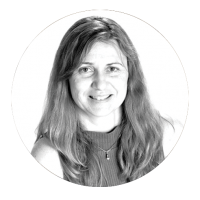 Professor and Chan Soon-Shiong Chair in Computer Science, Neuroscience and Pediatrics; Vice Dean for Research at USC Viterbi School of Engineering; Director of the Robotics and Autonomous Systems Center; Literally wrote the book on robots: The Robotics Primer

Health-minded robots are just a part of the expanding universe of robotics at USC. Some of the university’s best engineering minds have created or coded robots to quickly build houses on land or dive deep under the sea. But health care is one area where robots shine brightest. Read on to meet a few of the growing fleet of “Tro-bots.”

As founder and director of the Interaction Lab at USC, Maja Matarić wants to endow robots with the ability to help people, especially people with special needs such as patients with Alzheimer’s disease. MAKI, Nao, Bandit-II and the DragonBots — all used in unique studies by Matarić — exemplify what are often called socially assistive robots.

Matarić teams with seemingly countless faculty members, graduate students and undergrads, research assistants and technical staff across USC, Children’s Hospital Los Angeles and Rancho Los Amigos National Rehabilitation Center to push the frontiers of robotics. Her projects also include collaborations with engineers at universities including Yale, Stanford, Carnegie Mellon, the University of Pennsylvania and the Massachusetts Institute of Technology.

Here are a few of the robots that Matarić works with in her lab: 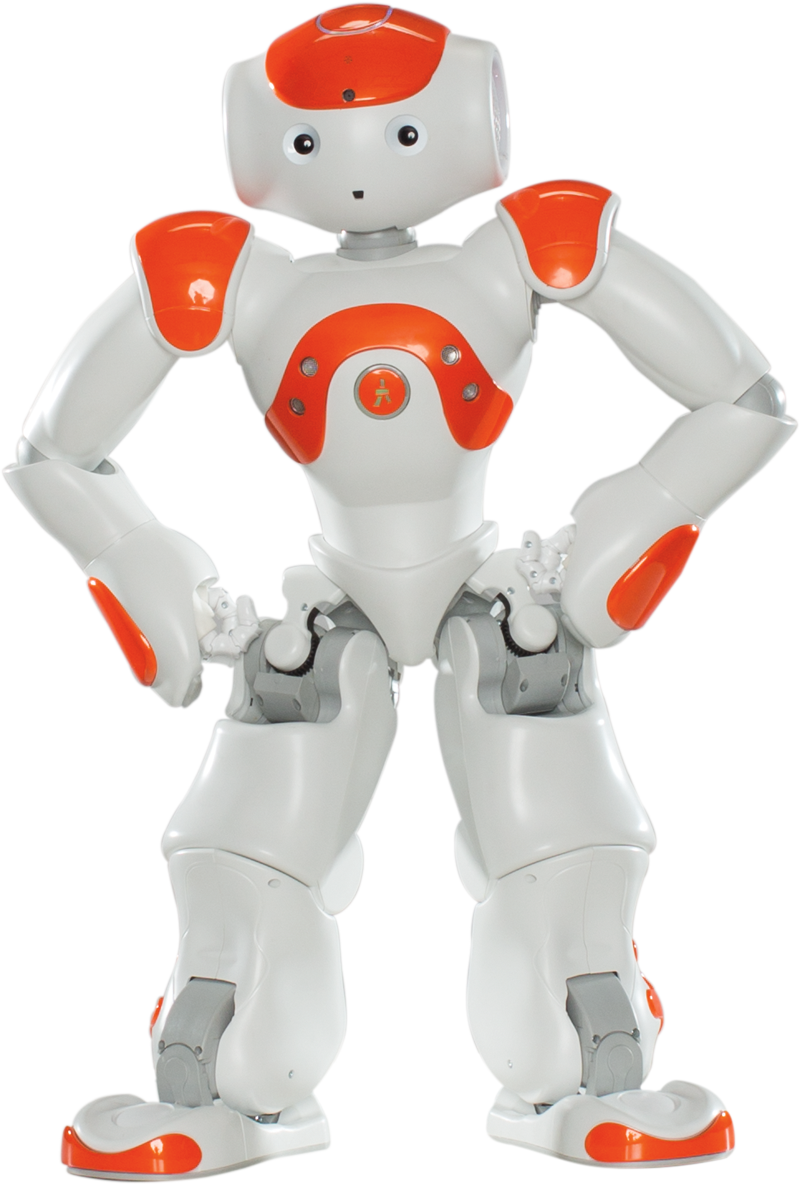 USC researchers have used Nao to coach overweight children to do exercises including bicep curls and squats. And among children with autism, Nao can encourage kids to do something they often struggle with: imitating behavior. In one study, Nao flashed its eyes green, nodded or said “Good job!” when children imitated its arm poses correctly. Kids who did it incorrectly improved over time with the help of the robot’s instructions and demos. Nao was also recently used as a tutor for preschoolers learning numbers. 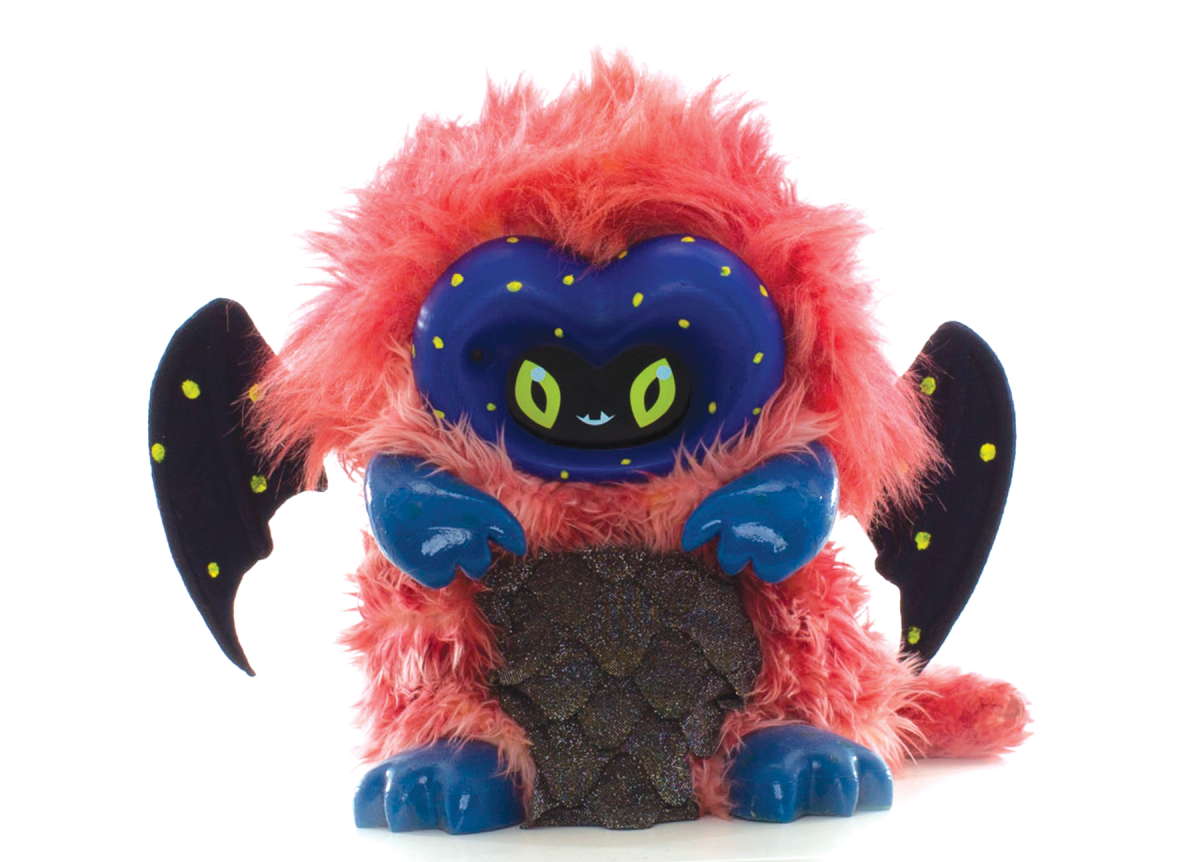 Motivation: Chili and Cayenne the DragonBots nudge kids to exercise (dancing, anyone?) and choose healthier foods.

First-graders regularly sit down with a DragonBot for a few weeks as the ’bot gears up for its big Dragon Race. During one-on-one sessions with the robot, children pick out different kinds of food to nourish it, and get feedback from the robot about the foods’ nutritional content. The children learn to pack a healthful lunch, choose good after-school snacks and create balanced meals. 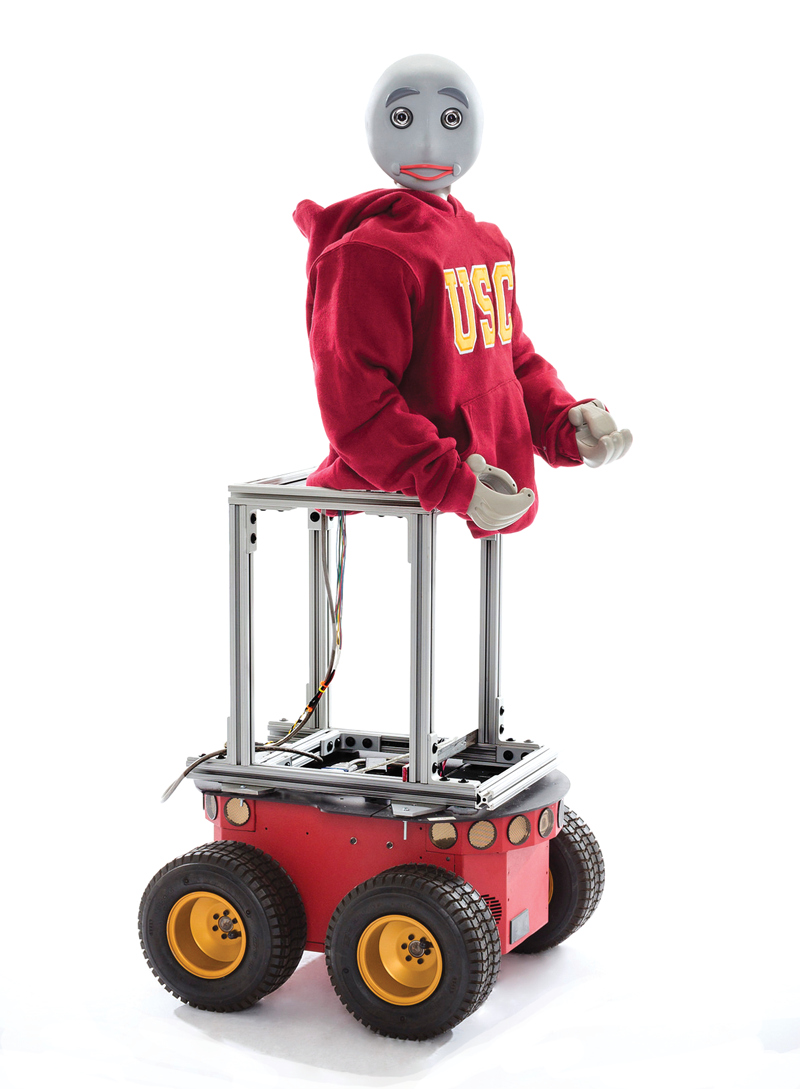 Issue: Weakness and immobility after a stroke

The robot instructs patients recovering from stroke to exercise their affected arms or legs and provides feedback and encouragement. So far, Bandit-II has proven its popularity with patients at the Rancho Los Amigos National Rehabilitation Center in Downey, California. It eventually may provide an option for convenient and affordable therapy in patients’ homes. It has also been used as a coach to teach social skills to children with autism, music therapy to Alzheimer’s patients and chair aerobics to the elderly. 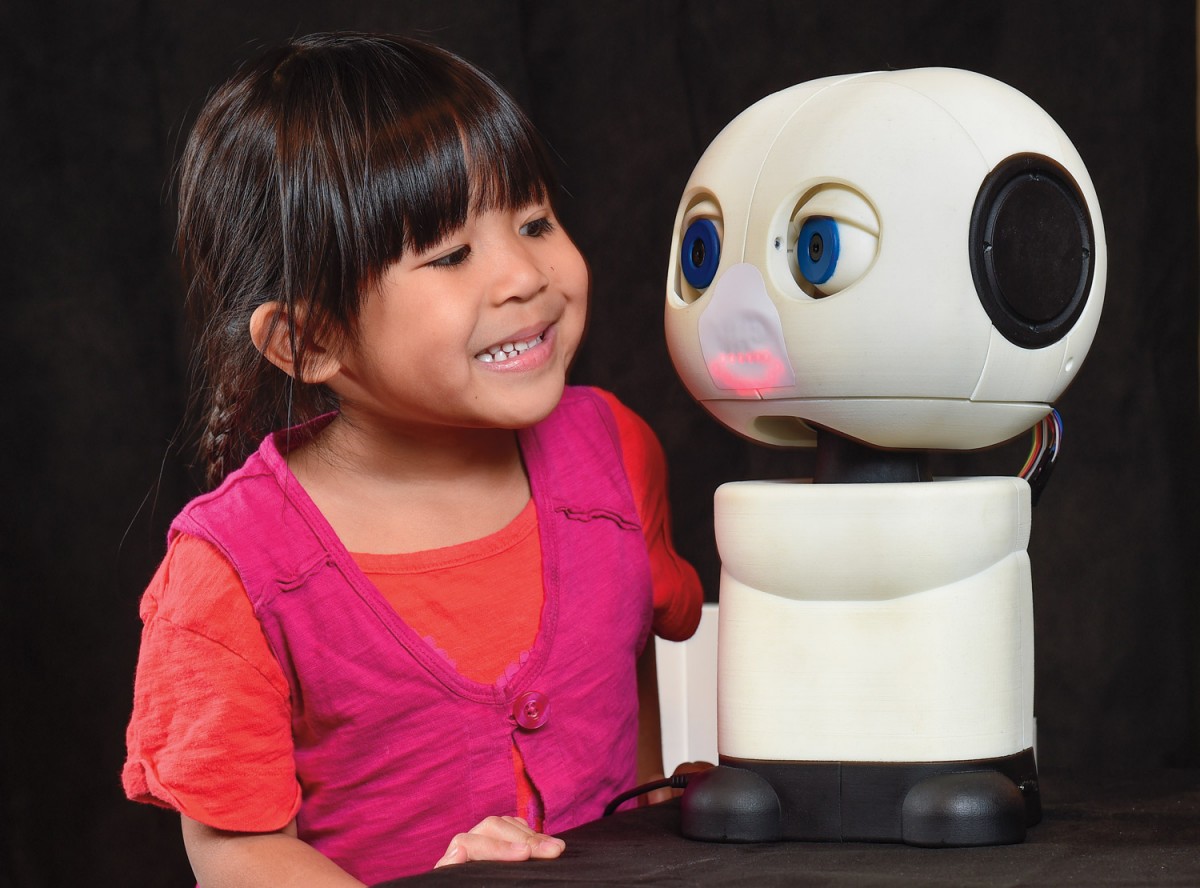 Motivation: MAKI aims to make children feel comfortable and at ease in a hospital, even if they’re about to get a needle stick for an IV line.

This open-source robot can be fabricated using an at-home 3-D printer and off-the-shelf hobby electronics. Measuring a little taller than 12 inches, MAKI is as portable as it is adorable, making it the perfect pacifier for nervous young patients at Children’s Hospital Los Angeles. But what makes MAKI unique is its ability to help children cope with fear and anxiety by expressing calm emotions and coping strategies that the child can imitate. 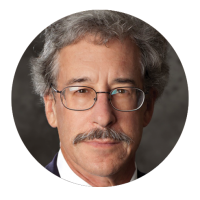 Professor of Biomedical Engineering at USC Viterbi; Director of USC’s Medical Device Development Facility; One of the original developers of the cochlear implant to restore hearing to the deaf.

Gerald Loeb was chief scientist for Advanced Bionics during part of the 1990s before moving to USC. His big focus: connecting the nervous system with electronic devices to help people with neurologic problems, such as paralyzed limbs or a heart with faulty rhythm.

Today, he’s CEO of a startup called SynTouch LLC, which is developing a tactile sensor called BioTac for robotic and prosthetic hands based on work from his lab at USC. Among other projects, researchers in his USC lab are developing computer models of the spinal cord’s circuitry, which is key to how the body learns and controls voluntary movements—like grabbing a coffee cup or clicking a mouse. 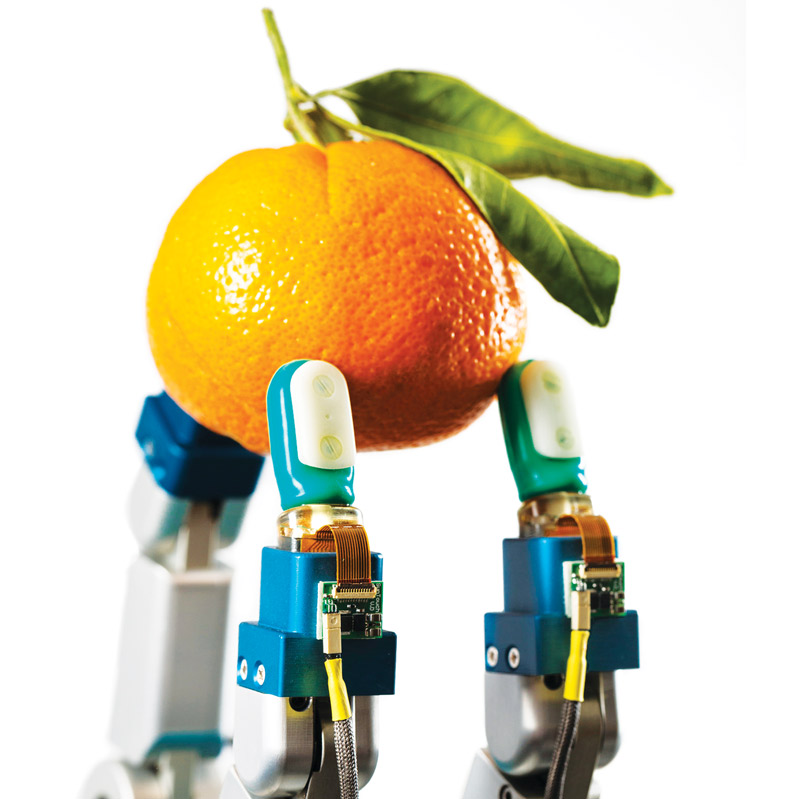 Issue: Paralysis or amputation of the hand

Motivation: A robotic hand that can feel objects and handle fragile items gently could change lives.

USC researchers are developing mechanical hands that “feel” using sophisticated sensors, which consist of a soft, flexible, skin-like material with fingerprints. These sensors can detect temperatures, the direction of forces, the hardness of materials and vibrations produced by rubbing a textured surface. This feedback can signal robotic hands to employ a gentle touch when handling delicate objects such as drinking glasses or eggs.

You might say Wei-Min Shen wants to give robots a mind of their own. His interests lie in artificial intelligence, autonomous robots and robots that can change their shape. He may have the rational mind of an engineer, but he also relishes the delight of robots: He wrote a book on how machines learn from their environment based on surprises.

His work on the SuperBot—a robot that can configure itself—earned the attention of the Defense Advanced Research Projects Agency. In 2014 the agency awarded him and his group at the USC Information Sciences Institute a $1 million grant to adapt the robot for use in the inhospitable expanses of space.

Asked how he came up with the SuperBot name, Shen told PC Magazine: “I just thought, This is a great robot, it needs a super name! and then I thought, SuperBot! and that became the name. I love the creativity. Everything we do here—none of it has ever existed before.” 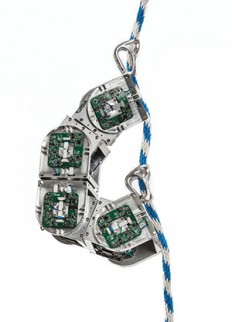 Motivation: Whether in a hurricane or earthquake, SuperBot aims to come to the rescue of humans.

SuperBot is composed of block-like modules—each of which has its own intelligence —and can reconfigure itself into many useful shapes. It could be shipped to the scene of a crisis, then rearrange its modules into shapes best suited for climbing mountainous terrain, carrying heavy loads, reaching long robotic arms into tight spaces and more.

OTHER ROBOTS THAT ARE HELPING IMPROVE HUMAN HEALTH: 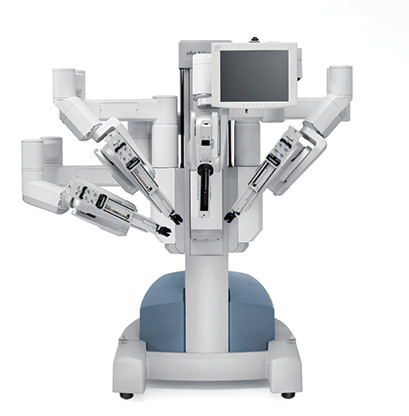 Motivation: Surgeons use these robots to operate more

precisely and gently than they could with their hands alone.

Keck Medicine of USC doctors use the da Vinci Xi Surgical System robot to remove tumors from the abdomen and chest through tiny incisions in the skin. They also use the MAKOplasty surgeon-controlled robotic arm for precise alignment during knee resurfacing and hip replacement surgeries and the Sonatherm robotic high-intensity focused ultrasound surgical ablation system to destroy small tumors in the kidneys. Vascular specialists use the Magellan Robotic System to navigate through blood vessels and open up blocked or narrowed arteries. For patients, robotics means less scarring, pain and bleeding and faster recovery. Rest assured: The robots are fully controlled by the surgeons and can’t operate on their own.

Special talent: Falling down and getting up again

Motivation: In a catastrophe like a nuclear accident, Athena could travel through rough, dangerous areas without exposing humans to harm.

A laser scanner in the six-foot-tall robot’s head provides long-range vision, while a 3-D camera interprets changes in terrain and nearby objects. The robot walks on two feet, just like a human. Once Athena can walk around autonomously, researchers hope to program it to perform manipulation tasks.

Issue: Paralysis or amputation of the hand

Motivation: Engineers want to enable amputees to control their prosthetic hands with their minds.

At USC, engineers are building “closed-loop brain-machine interfaces,” or BMIs, that record the electrical activity of neurons in the brain. The BMIs translate neurons’ activity into commands. This can enable a patient to direct the movements of a prosthetic hand just by thinking about it.