Which one the five finalists in ‘The Next MacGyver’ competition do you want to see on TV?

What he did with just a safety pin, a glue stick and a coffee cup was unbelievable. MacGyver was must-watch television in the 1980s and its eponymous hero proved that secret agents don’t need weapons—just their smarts—to save the world.

Now “The Next MacGyver” competition aims to bring a new problem-solving engineer to life in a new TV series, but this time the hero is a woman. It’s organized by the USC Viterbi School of Engineering, the National Academy of Engineering and Lee Zlotoff—creator of the original MacGyver.

Beyond entertaining, the goal of “The Next MacGyver” is to inspire. Women comprise 35 percent of USC Viterbi’s undergraduates—and 38 percent of its freshman class—but “across the nation, less than 20 percent of engineering students are women. This cannot continue,” USC Viterbi Dean Yannis C. Yortsos says.

The open call for TV show concepts drew more than 2,000 entries in 2015. Five proposals earned each of their creators a roll of duct tape, $5,000 and the chance to partner with a TV producer to develop their shows. Here are the five winning concepts that you might see on TV one day.

BETH KESER, a semiconductor engineer, won for the adventure-procedural Rule 702. She’ll be mentored by Lori McCreary (Madam Secretary), president of the Producers Guild of America.

CRAIG MOTLONG, a Seattle-based creative director, was chosen for the action drama Q Branch. Anthony Zuiker, creator and executive producer of CSI and its spinoffs, will work with him.

SHANEE EDWARDS, film critic at SheKnows.com, is taking her steampunk concept Ada and the Machine to actress-producer America Ferrera ’13 (Ugly Betty, Sisterhood of the Traveling Pants) and Gabrielle Neimand of Take Fountain Productions.

At Keck Medicine of USC, keeping both organ transplant recipients and their donors healthy is all part of the plan. (Illustration/Simone Noronha) What to do About Science Denial

At Keck Medicine of USC, keeping both organ transplant recipients and their donors healthy is all part of the plan. (Illustration/Simone Noronha) Climate change 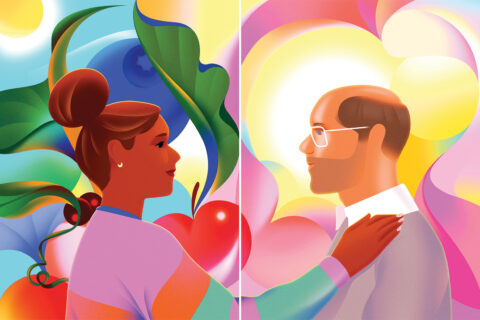 At Keck Medicine of USC, keeping both organ transplant recipients and their donors healthy is all part of the plan. (Illustration/Simone Noronha) Medical innovation

The shortage of organs for transplants is an issue for patients. Living donors are one key. Another: Helping them get healthier to ensure successful outcomes for the donor and the patient.