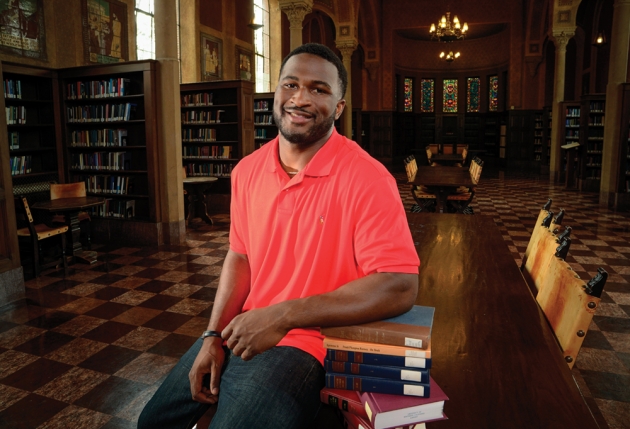 Last year Javorius “Buck” Allen roared from the bottom of USC’s depth chart, rushing for 785 yards and scoring 14 touchdowns to help the sanction-hampered Trojans finish the season with a 10-4 record.

Those touchdowns, executed “all in spectacular fashion,” according to a Los Angeles Times profile published days before the Trojans’ epic victory over No. 5 Stanford, helped spark a U-turn for USC’s 2013 season.

But to people who know the 6-foot-1-inch, 220-pound tailback from Tallahassee, Florida, the most inspiring turnaround didn’t take place on the field. It happened in the classroom.

“The football part I knew I was prepared for,” says Allen, now a fourth-year junior. “But the academic part hit me kind of hard.”

Within weeks of starting his freshman year, Allen struggled with college coursework. Denise Kwok, a learning specialist and director of athlete academic support with USC’s Student-Athlete Academic Services, saw his difficulties firsthand. “When Buck got here,” Kwok says, “he didn’t realize how college works in general, how quickly it goes, the level of academic rigor.”

Allen had come from a rough background. Growing up poor in Miccosukee, a rural town in northeastern Florida, and raised from a toddler by his grandmother, he was only 12 when his older brother Devon—the only father figure he’d ever known—went to prison for attempted murder.

Football offered Allen structure. With the help of Alice and Mickey Cullen, friends who took him under their wing from middle school on, Allen graduated from Tallahassee’s Lincoln High School and received scholarship offers from football powerhouses like Alabama, Auburn and USC. Signing with the Trojans meant he’d have to take additional high school math and chemistry to meet NCAA eligibility clearinghouse requirements. By the time he finished those courses, the fall 2011 semester was already underway. He’d missed football training camp and didn’t know the playbook, which meant redshirting his freshman year.

But the young man in the No. 37 jersey has gone from a D average to a B average. With help from Kwok and others, the sociology major has transformed from a silent, back-row sulker to an intense, front-row learner who consistently shows up during faculty office hours. “It was pretty cool to see,” Kwok says. “Since he’s developed more self-confidence on the field, his academic confidence has increased.”

Professional football looms large in Allen’s near-term plans, but down the road he sees himself working with children. Maybe he’ll go for a master’s in social work, he says.

Bursting into the Trojan football limelight last winter—just as he reached NFL draft eligibility—Allen admits he was tempted to quit school. Driving him was the knowledge that he could finally provide for his family financially. “It just hurts to go home and see the situation they are in,” he says. “Everybody’s counting on me.”

But he resisted the temptation.

“You have to take care of yourself before you can take care of somebody else—my grandma told me that,” he says. “I knew if I stayed I could get my degree in a year, and then I could help my family.”

Allen hasn’t seen or spoken to his brother Devon since starting USC, and a ban on cellphone use by inmates keeps the brothers from talking.

“I write him, though. He just wrote me back recently,” says Allen, smiling. He knows Devon has access to television. “I always wondered, this past season, is he watching me playing?”

Younger brother Deonshaye, now 18, also weighs on his mind. After Allen left for USC, the teenager got into trouble with drugs and fighting. But now his older brother’s success in school may be serving as an example. Deonshaye has signed up for the ACT college admission exam, Allen says. “I’m proud of him.”