On the Safe Side 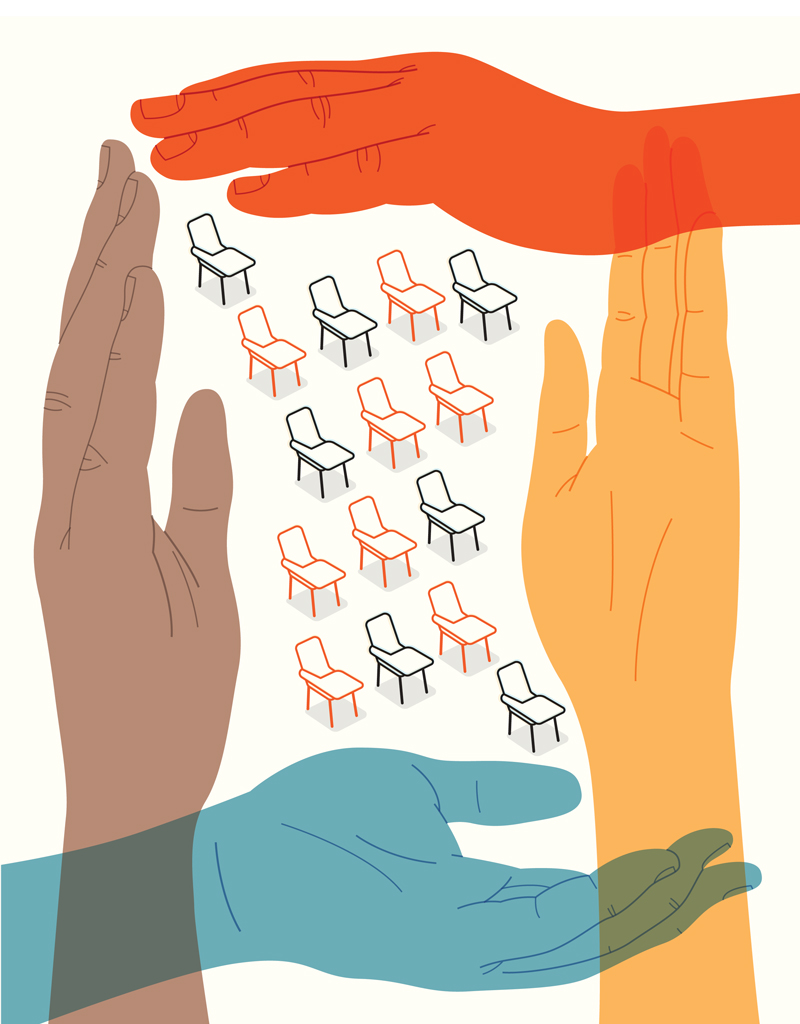 Childhood is a time for wonder and learning, for exploration and discovery, for making new friends and building confidence. But sometimes that period of innocence is shattered by violence, discrimination or harassment. And that turmoil tends to occur where kids spend most of their day: at school.

Teachers and administrators deal with bad behavior every day in classrooms across the country.

Nearly eight in 10 public K-12 schools reported at least one incident of violence, theft or other crime on campus in 2016, according to the National Center for Education Statistics. The latest statewide data show one third of students in California schools are bullied. Rates of suicide and depression among teens have increased substantially in recent decades. And school shootings, although still extremely rare, continue to garner widespread attention.

So how can we make our schools safer and ensure that students can thrive? Experts across USC agree that the best way to create lasting safety is to focus on both the schools and their communities. Schools should build welcoming and supportive environments that not only emphasize academics, but also promote personal growth and well-being.

“If our society is to move in the right direction, we need to take a more holistic view of schools,” says Ron Astor, an expert in school violence and bullying who holds a joint appointment at the USC Suzanne Dworak-Peck School of Social Work and USC Rossier School of Education. “What kind of people are we trying to create, not just as individuals or groups, but as a society? I like the metaphor of creating A-plus human beings, not just A-plus students.”

Astor, the Lenore Stein-Wood and William S. Wood Professor of School Behavioral Health, acknowledges that too many children today experience racial discrimination, get into fights and see classmates carrying guns, knives and other weapons at school.

“We’re talking about hundreds of thousands of kids each year who are affected,” Astor says. “That has to have an impact on whether you can concentrate in your AP math class, if you know there’s a knife nearby and someone is being threatened.”

There is some cause for optimism, he says, noting that overall crime and violence have decreased both in U.S. society in general and in schools since the mid-1990s, for reasons that remain unclear. Researchers have found that shooting incidents involving students are on the decline, as are virtually all indicators of

A recent survey found that 57 percent of teens say they are worried about a shooting happening at their school. Parents of teens are even more likely to be concerned; 63 percent report being at least somewhat worried about school shootings. Many researchers trace this perception of exaggerated danger in schools to breathless media coverage of high-profile incidents. Mass shootings like the recent tragedy in Parkland, Florida, can have a dramatic effect on feelings of safety.

That response is understandable, Astor says, acknowledging that any level of violence or bad behavior at school is unacceptable. It becomes problematic, however, when those misconceptions are used to justify unproven or even harmful approaches.

The instinct of many is to embrace a bunker mentality, increasing security and taking other measures to “harden” schools. More students now report seeing security guards or police officers stationed on their campus, rising from 54 percent in 1999 to 70 percent in 2015, along with increased video surveillance and metal detectors, according to federal statistics.

That can be counterproductive and even harmful, says Professor Erroll Southers, director of USC’s Safe Communities Institute, which conducts research and education on violence prevention and public safety issues. Fortifying schools’ defenses doesn’t address violence that takes place just steps off campus. Nor does it ensure that people with mental illness receive the support they need.

Southers acknowledges that it can be challenging to inject restraint and objectivity into a complex problem like school safety, especially given the impassioned national debate on issues like gun control and arming teachers. Even the concept of “run, hide, fight” spawns heated discussions, with some experts arguing that the popular strategy taught to many kids as a way to stay safe during an active shooter incident can cause unnecessary fear and anxiety.

But after decades in law enforcement, academia and private consulting, he is confident that the right approach starts with determining the specific needs of a school and understanding how to make it a more supportive place.

“We need to get away from guards, guns and gates,” says Southers, professor of practice in national and homeland security at the USC Price School of Public Policy. “We have to build a community that’s safe.”

The former FBI special agent and police officer has convinced many school administrators to reconsider installing metal detectors or hiring armed guards. Although he recognizes the need for common-sense security measures to reduce risk, they should not be a knee-jerk reaction to a serious incident, but instead part of a comprehensive assessment of the threats and vulnerabilities unique to each campus.

When he visits a school seeking help with safety, Southers talks to everyone from teachers and staff members to parents and first responders. He almost always finds that the most helpful information comes from students. They know how to work around school rules and sneak a weapon or other prohibited items onto campus. And many students want to provide suggestions on how to improve those rules and policies, he says, but they’re often ignored.

Ensuring that children feel comfortable about reporting their concerns to teachers or staff members can help eliminate what Southers calls a code of silence — a reluctance that prevents witnesses from coming forward before violence occurs. A federal study found 81 percent of school shooters had revealed some hint of their plans to at least one other person, but no one told authorities.

Beyond encouraging more people to report concerning behavior, Southers is adamant that the education system provide more behavioral and mental health resources to prevent that behavior from taking place. “The bully today is your possible school shooter later. But we don’t pay enough attention to that bully.”

Southers emphasizes this mindset through initiatives like the USC National Safe Schools Digital Summit, an annual live-streamed conference covering pressing issues around school violence and prevention. He also is advocating for a national center of excellence on school safety to identify and promote best practices, and he calls for more federal resources dedicated to safety education and public health efforts in the community.

Beyond encouraging more people to report concerning behavior, Southers is adamant that the education system provide more behavioral and mental health resources to prevent that behavior from taking place.

USC’s chief threat assessment officer, Patrick Prince, agrees with an emphasis on prevention in schools. After a prolonged focus among researchers, educators and mental health experts on helping victims recover from trauma, he has seen a shift in recent years toward efforts to identify and manage threats in all schools before they become tragedies. On a university level, Prince focuses on recognizing students who are struggling in class or acting in a way that causes concern, as well as staff members who seem isolated from friends or family, and other members of the campus community who show early signs of distress. The goal, he says, is to provide them with support before problems escalate.

“Very few people, despite what you hear on TV, are truly deadly,” says Prince, who previously worked as a consultant in the aftermath of mass casualty events. “Let’s get them back on a healthy path.”

Prince’s overarching vision is to create a culture of caring that ensures that people feel connected and find meaning in their lives, he says, because “healthy, grounded, connected people don’t become violent.” He expects this comprehensive and holistic perspective on school safety will become a model across the nation, not only at universities but also in primary and secondary education.

“What we’re doing here at USC is the future,” Prince says. “We’re embedding threat assessment within this notion of wellbeing and support. It’s harder to measure, but there’s no doubt in my mind that the approach we are using here is the right one.”

As an expert on bullying, Astor has also learned that safe schools are those that create a positive climate, build connections with their community, and provide social and emotional support to students, teachers and others on campus. It’s not just anecdotal evidence, either.

In a recent seven-year study across 145 secondary schools in California, Astor and his colleagues identified which schools, classrooms and students were dealing with problems like victimization, cyberbullying and weapon use. They used those findings to help administrators address their specific challenges using strategies tailored to their own schools and students, like starting an anti-bullying club or creating a peer mentoring program. Their efforts led to a 55 percent reduction in gun carrying on school grounds, a 44 percent drop in gang affiliation and participation and a 38 percent decrease in the use of weapons to injure or threaten students.

Astor also has found strong evidence that a welcoming and supportive campus environment can work wonders.

While studying school violence in Israel with longtime collaborator Rami Benbenishty of Bar-Ilan University, he kept finding surprises in research data related to behaviors like bullying and fights. Some schools in neighborhoods plagued by drugs, gangs and guns were peaceful oases largely free of violence. Astor and Benbenishty assumed the statistics were faulty, but further investigation proved otherwise.

During countless visits to these atypically safe schools, the researchers found they had some characteristics in common: They did the unexpected.

In response to an issue like bullying, many administrators bring in a prepackaged program with step-by-step instructions on how to stop the behavior. But the safe schools passed over those rigid procedures in favor of broader efforts to create a more tranquil environment. At the heart of that philosophy was leadership by remarkable, visionary principals who avoided relying on strict security measures and extreme punishments to discourage bad behavior. Instead, they focused on efforts such as beautifying the campus and ensuring that teachers used a positive and friendly tone when interacting with students.

“These principals not only believed it was their personal mission to change the lives of these kids so they could succeed, but they also believed the children in their schools were being created and trained to change the world,” Astor says.

And although the strategy might be less visible than stationing armed guards at all entrances or lining fences with razor wire, he is confident that promoting well-being and compassion is far more effective at creating safer schools.

“It’s not just a philosophical debate. This is a battle over what the heart and soul of a school should be,” Astor says. “And we have enough data over the years to show this more supportive approach has stronger science behind it.” 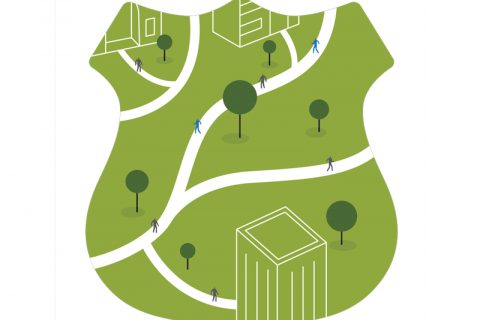 On the Safe Side

The USC Department of Public Safety offers several initiatives so that Trojans can help themselves, and each other, stay safe. 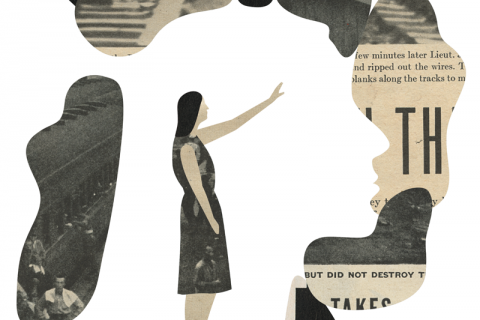 How to Teach Against Hate? Lean on Genocide Survivors

Learning from eyewitnesses of some of history’s darkest moments, educators strive to teach the power of decency and respect. 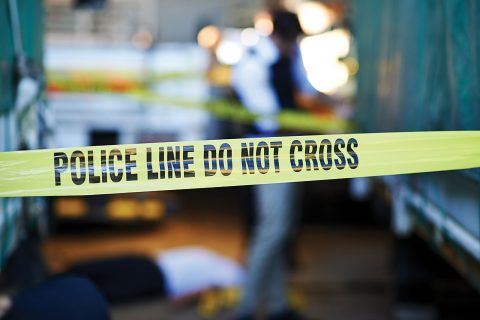 To help prevent deaths from homicide and suicide in America, Janet Blair studies the stories behind them.