Reggie Bush is Back — Now Relive His Best Plays

Remember No. 5 with the rest of the Trojan Family by checking out this (totally unofficial) list of the running back’s most memorable moments.

One of college football’s most electrifying players in recent memory is among friends once again. USC welcomed Reggie Bush back to the Trojan Family this summer following a 10-year NCAA-mandated disassociation from the university. In honor of No. 5, we picked our top 5 jaw-dropping best plays from his days in cardinal and gold.

Did we miss your favorite Reggie Bush moment?

Lightning in the Fog: Oregon State, 2004

USC seemed lost in the heavy fog blanketing Reser Stadium, up by only a point over a stubborn Beavers team early in the fourth quarter. Then Bush fielded a punt and spun away from the first would-be tackler. Pinned against the right sideline, he could have gained a few more yards and safely ducked out of bounds. Instead, he sprinted left along the 35-yard line, turned upfield and easily dodged the punter as he scampered to the end zone.

On a stellar 65-yard touchdown run during the Trojans’ opening drive, Bush showcased his vision by weaving through traffic down the middle of the field. Then he showed off his speed, outpacing several defenders along the sideline. After a nasty cutback that froze a UCLA defender in his tracks, Bush capped off the performance with a front flip over the goal line. 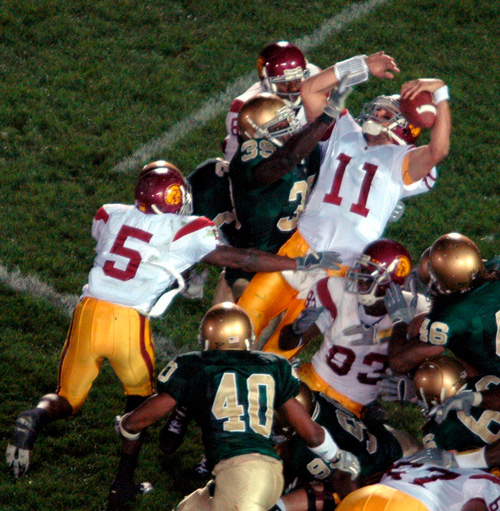 Bush never touched the football during one of his most memorable highlights. Down by three with seven seconds remaining against the Irish, he instead gave Matt Leinart a little extra nudge from behind on a 1-yard sneak play. The famed “Bush Push” helped his quarterback across the goal line and lifted the Trojans to victory, 34–31, in this instant classic.

In a fiercely contested rivalry game in South Bend, Bush tied up the score at 21 on a 45-yard dash through the heart of the Irish defense. As he sped through the line and darted left, he didn’t have time to maneuver around a cornerback. So he went over him. The hurdle freed up No. 5 to cruise to the end zone and celebrate in front of the Trojan Marching Band.

On a night when Bush set a conference record with 513 all-purpose yards, including nearly 300 yards rushing, one play stands out among countless highlights. He took the handoff at midfield, cut through the line of scrimmage and sprinted down the left sideline. As a defender closed in on an angle, he hit the brakes, leaving the Fresno State player grasping at air. Bush then accelerated away, crossing the field untouched into the endzone.

In this crosstown grudge match, Bush received a handoff near the 20-yard line with a few minutes left in the first half. He dashed left toward the corner of the end zone. As the crowd of defenders closed in, it seemed inevitable he would be pushed out of bounds. Then at the 3-yard line, Bush went airborne, sailing over a Bruin defender and landing inside the front pylon. The touchdown put USC up by 23 en route to a 66–19 rout. 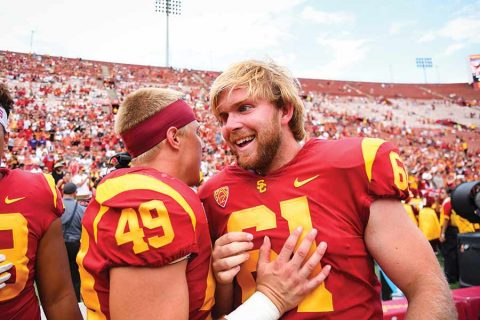 In this grudge match, Reggie Bush capped off a 20-yard scamper by going airborne over a defender, putting USC up by 23 midway through a 66–19 rout. (Photo/Courtesy of USC Athletics) Trojan Voice

Get to Know USC Football’s Inspiring and Surprising Jake Olson

When he’s not training with the football team, the freshman works on his business startup, practices his golf swing and is always ready to pull a practical joke. 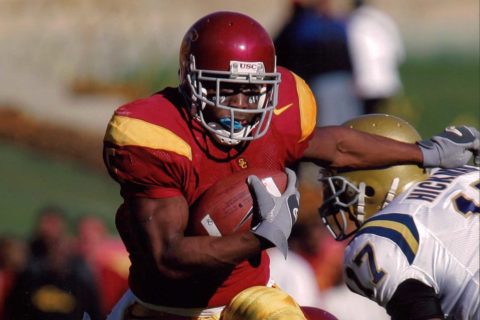 In this grudge match, Reggie Bush capped off a 20-yard scamper by going airborne over a defender, putting USC up by 23 midway through a 66–19 rout. (Photo/Courtesy of USC Athletics)

Reggie Bush welcomed back into the Trojan Family

The former two-time All-American tailback has concluded a 10-year NCAA-mandated disassociation from the university.

In this grudge match, Reggie Bush capped off a 20-yard scamper by going airborne over a defender, putting USC up by 23 midway through a 66–19 rout. (Photo/Courtesy of USC Athletics) Action Shots

Reggie Bush is Back — Now Relive His Best Plays