Actor JP Karliak ’03 will never forget the first time he saw He-Man go up against the evil forces of Skeletor in a Masters of the Universe cartoon.

The muscled protagonist wasn’t openly queer, but to a gay kid like Karliak, “[watching He-Man] was like seeing Bugs Bunny in drag, which was as queer as you could get,” he says. The show also made him feel like he could be in a superhero cartoon someday.

Karliak, now 41, did end up being cast in an animated superhero production: He’s the voice of Green Goblin in Spidey and His Amazing Friends. He’s also the voice of Boss Baby in the Netflix comedy The Boss Baby: Back in Business. The USC School of Dramatic Arts alumnus says a lot has changed since he watched He-Man on Saturday mornings.

Today’s animated shows and video games feature far more LGBTQ+ characters than they once did. It was so cool those characters were emerging on the screen.

“Today’s animated shows and video games feature far more LGBTQ+ characters than they once did,” he said. “It was so cool those characters were emerging on the screen,” he says. “That representation can provide an infusion of hope and a feeling of belonging for kids.” There was one problem: Karliak was frustrated to see these voice acting roles—especially the trans and non-binary ones—cast with non-queer talent.

Two years ago, Karliak raised the issue to a casting agent friend, who told him that the industry just didn’t know how to find queer talent to audition for these parts.

“We’ve all seen movies with cisgender and straight actors portraying queer roles competently or very well,” he explains. “But they are effectively depriving a queer person of making a living in this industry and earning wealth telling their own stories.”

That disconnect motivated Karliak to create Queer Vox, a nonprofit training academy and community for LGBTQ+ voiceover actors. “I wanted to fling the door open and be like, ‘Now’s the time,’” he says.

The organization’s mission is to work with queer actors and voiceover employers to promote casting authenticity, diversity and equity, and to make those who are making casting decisions aware of the available talent.

Karliak knew he was filling a need when he launched Queer Vox during the early days of the COVID-19 pandemic. He planned an introductory pay-what-you-can voiceover class for about 20 people but received more than 200 applications.

Queer Vox online directory, includes more than 500 performers, and is used by more than 100 casting professionals.

In addition to offering classes, Karliak also created a Queer Vox online directory, which includes more than 500 performers, and is used by more than 100 casting professionals. “For those casting directors who are like, ‘I can’t find a queer person,’ lucky them! We have a directory for that,” Karliak says.

Karliak hopes these resources can help him empower other queer actors. “So much of this career is advocating for yourself and getting out of that old Hollywood trope that we all need to bow down to casting directors and producers and beg for scraps,” he says. “No. We’re all colleagues, and we’re all working in this together and trying to solve a problem.”

Karliak didn’t know he’d become an advocate for LGBTQ+ performers, but the Scranton, Penn. native knew early in his acting career that he wanted to be a voice actor. Because Robin Williams caused such a sensation as the lovable Genie in the 1992 animated Disney classic Aladdin, Karliak thought he would have to be famous to land these lead roles.

I was under the impression that if you weren’t a celebrity, nobody was going to let you do voices. My plan was to go to Hollywood, get famous, then do voiceover.

“I was under the impression that if you weren’t a celebrity, nobody was going to let you do voices,” he recalled. “My plan was to go to Hollywood, get famous, then do voiceover. I just needed to get over this little fame speedbump to get to the career I really want.”

The seeds for his voiceover work were planted during Karliak’s days at USC. In his first semester, he was in Picnic at Hanging Rock, based on the Australian novel, where he played a ranch hand. He later had roles in Ring Round the Moon and Equus.

But it was taking a musical theater audition class taught by Kelly Ward that helped chart his course. Ward, who had been a showrunner on several animated series, advised Karliak to study with Bob Bergen, mostly known for being the modern voice of Porky Pig from Looney Tunes.

“I took the class with him in North Hollywood, and from there, we were off to the races,” Karliak says. “I got an agent and slowly but surely just started booking gig after gig after gig.”

Besides Boss Baby and Green Goblin, Karliak’s other best-known roles include Dante Crescendo in TrollsTopia, Tin Man in Dorothy and the Wizard of Oz, Wile E. Coyote in New Looney Tunes, and Willy Wonka in Tom and Jerry: Willy Wonka and the Chocolate Factory.

For Queer Vox, the timing is certainly right. Some of the largest and most popular brands in kids’ animated TV—including Nickelodeon, PBS, Netflix and Disney Junior—have led the way in quadrupling the number of LGBTQ+ characters in the past decade, according to Insider.com.

Odee, a nonbinary okapi, was featured in Dreamworks Animation’s Madagascar: A Little Wild in time for Pride Month in 2021. Gay dads debuted on Sesame Street, and in Disney Junior’s Muppet Babies, Gonzo starred in a gender-creative storyline.

Many trans, nonbinary and queer folks work in voiceover, says Karliak—but are typically in anime, dubbing and audiobooks. “[They’re] not in mainstream animation and interactive titles,” he explains. “I wanted to make sure performers had the option of entering mainstream work if they wanted to.”

Queer Vox has also branched out, partnering with the Halp Network, which connects creative industry professionals to content creators so they can participate in entertainment industry panels and equity and diversity initiatives at studios and interactive companies. The result: more dialogue around how to better recruit, develop, cast, and ultimately work with queer talent.

Casting in a changing environment

Today, talent agents, casting directors, and other industry professionals regularly reach out to Queer Vox to access its talent pool for casting.

“When I’m seeking a specific person for a role, I can start with Queer Vox,” says Amanda Wyatt of Talkback Casting and Directing. “They have built an incredible database of actors. A lot of people out there don’t have agents.”

This is a changing environment, and JP has been so helpful in educating me on approaching this more inclusive casting that we all want represented in games and animated series.

Like other casting agents, Wyatt depends on Queer Vox to give advice on brief character descriptions known as “breakdowns” so they can be properly inclusive.

“This is a changing environment, and JP has been so helpful in educating me on approaching this more inclusive casting that we all want represented in games and animated series,” Wyatt says. “The last thing I want is my name going out on a casting document with something that’s not appropriate.”

“It’s a wonderful group of people dedicated to having open transparency dialogue,” she says. “I ask how I should phrase things in casting descriptions so the community knows they are being respected. Being seen and heard is very important, so I would like to extend that to others and have them be seen and heard.”

A setup for success

One of the biggest Queer Vox success stories so far is that of trans actor JJ Hawkins.

Since publicly transitioning in 2017, Hawkins has worked steadily in on-screen television roles, including recurring or guest spots on The Red Line, Charmed, NCIS, Criminal Minds, and All Rise, among others.

But he had not been able to book any voice roles.

“I went through the class and learned the differences from on-camera acting,” he says. “Once I was able to do that, I was able to click into something I was very much made for.”

Held virtually last August, the event brought together six casting directors from video and animation and 12 performers, who met for 10 minutes each. The brief meetings included an audition.

“I had very nonexistent expectations,” Hawkins recalls. “But it has led to nothing but bounty.”

One of his 10-minute meetings was with Disney Television Animation’s director of casting and talent relations, whom he impressed with his portrayal of an evil Disney character.

A couple of days later, Disney asked him to prepare a few more characters; this audition video led to Hawkins being courted by several agencies before signing with A3 Artists Agency.

I want to make sure that as people come through our digital doors, they are getting the training they’re looking for and the support they need as queer actors.

“There are so few trans and nonbinary voices in animation,” Hawkins pointed out. “Out of all these big agents, only one had a trans male client.”

In April, he booked a lead role in an upcoming Disney Television Animation show and will be playing a trans character. He considers this to be a significant breakthrough both professionally and personally.

“We all desire authenticity; that’s something humans crave,” Hawkins says. “That is the best way to tell a story, not only for storytellers but for the receivers of the story. Authenticity is an inexplicable component that adds humanity.”

And despite his extensive IMDb list of credits, Karliak was never content only to be a performer. Even before Queer Vox, industry friends often sought him out for advice on casting LGBTQ+ roles.

“I want to make sure that as people come through our digital doors, they are getting the training they’re looking for and the support they need as queer actors,” he says. “When they go into the actual workplace to get an agent, audition, and book jobs, I want them to feel prepared. As long as we’re doing that, I think we’re doing a good job.” 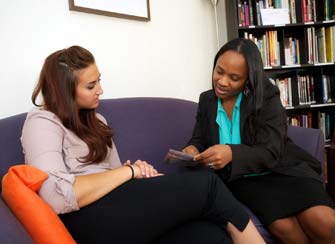 La Shonda Coleman, new director of the Center for Women and Men, has a clear vision of its aspirations. 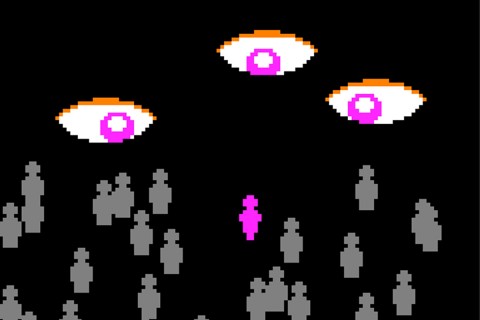 As games get more sophisticated, they include other perspectives, including those of women and the queer community.