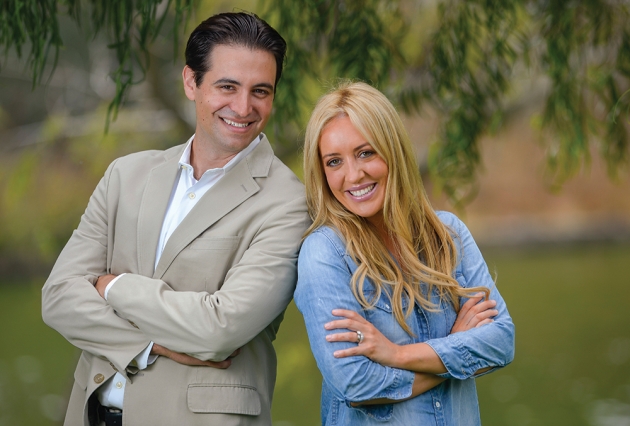 Two alumni translate their marketing smarts into careers in the sports and beauty industries.

ILAN BEN-HANAN ’00 AND SARA HAPP ’01 might not think of themselves as a “power couple,” but the label fits.

As vice president of programming and acquisitions for ESPN, Ben-Hanan oversees a department responsible for scheduling 400 college football games a season across the ESPN and ABC networks. Happ is successful in her own right, running her innovative beauty company in Redondo Beach, California. She gave birth to the couple’s daughter in 2013.

Their path started at USC, where they were both broadcast journalism majors, and it grew out of their determination. As a student, Ben-Hanan dreamed of landing a job with USC Athletics. After calling the department every week for nearly a year to ask about job openings, he scored an interview and was hired as a marketing manager. That experience proved to be a stepping stone to a position with ESPN in Connecticut, and in 2002 he and Happ moved east. Happ initially worked in marketing for ESPN—“I was not the hard-news type,” she says—but quit in 2006 when her beauty label, Sara Happ, became an overnight sensation.

Happ’s business started with cold Connecticut winters and a persistent case of chapped lips, which the Chicago native cured by inventing a new product, the Lip Scrub. Clueless about cosmetics compositions or chemistry, but knowing exactly what her scrub should feel, taste and smell like, she created it by trial and error from basic ingredients in her kitchen. “It was sugar, essential oils and vanilla extract,” Happ says, laughing. “I was whipping up lip scrub like other people bake or cook.”

She got her exfoliating product into stores by going door to door at small, exclusive cosmetics shops. Her big break came when People magazine received a tip that actress Reese Witherspoon loved the scrub. In one weekend so many customers placed orders that Happ’s website crashed. Fast-forward eight years, and Happ employs seven people, three of them Trojans. Nordstrom and J.Crew sell her products, and the beauty line is now available in 20 countries.

The couple gives back where and when they can. A two-time cancer survivor, Ben-Hanan came up with the idea for ESPN’s Jimmy V Week. During the annual weeklong fundraiser, the network drives donations for the Jimmy V Foundation, a nonprofit dedicated to cancer research in memory of famed college basketball coach Jim Valvano. Ben-Hanan and Happ also return to USC yearly to speak to students at the USC Annenberg School for Communication and Journalism and the USC Marshall School of Business about their fast-track careers. So what’s the secret to their ascent?

Whatever they call it, the former USC Annenberg students took to heart what their professors used to tell them: “The person who digs hardest gets the story.” And for this couple, it’s a story of success.