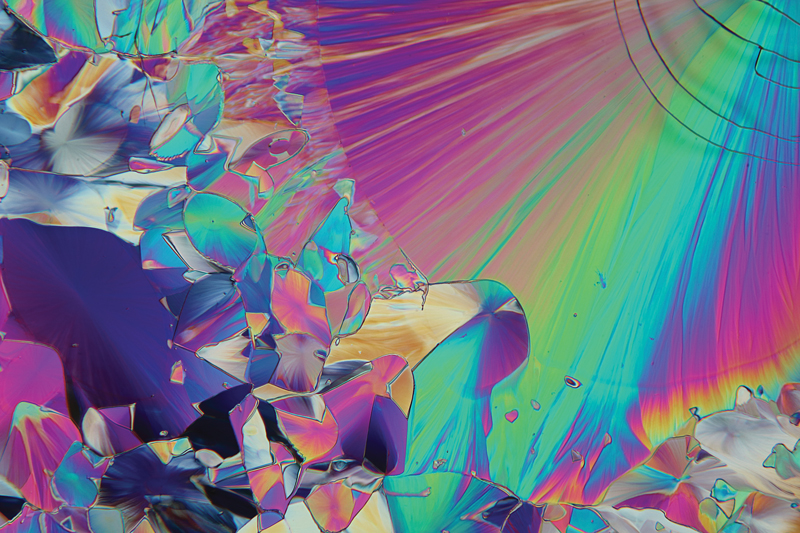 In Parkinson’s disease, too little dopamine is produced in part of the brain. This photo shows a magnified view of dopamine crystals under polarized light. (Photo/ Karl Gaff / Science Photo Library)

Researchers are closing in on one of the most common — and complex — neurodegenerative diseases.

When patients with Parkinson’s come to see Daniel Togasaki, the USC physician can’t prescribe a cure or offer an explanation for how people develop the disease — but he has reason for optimism.

“New scientific information makes me very hopeful that we are getting to the root cause of Parkinson’s,” says Togasaki, a Keck Medicine of USC neurologist and specialist in Parkinson’s disease treatment in Los Angeles. “It’s very possible, in the next five to 10 years, we will have a treatment that will stop progression of the disease.”

Like many of his dedicated colleagues at the USC Parkinson’s Disease and Movement Disorder Center, Togasaki is racing to unlock the mysteries of the complex disorder. At stake are the futures of nearly a million Americans who will be living with Parkinson’s disease by 2020.

The answers lie in one of the last frontiers of medicine: the human brain and nervous system.

Looking for Causes of Parkinson’s Disease

Partly because scientists don’t yet fully understand the disease’s origins, there’s no definitive diagnostic test for Parkinson’s. Doctors rely on a combination of tests like PET and SPECT scans, which use radioactive tracers to generate 3D images, and observation of symptoms like a shuffling walk.

The disease itself isn’t fatal, but as it progresses, it can lead to disabilities and complications that can cause death. The process can take anywhere from years to decades, depending on the individual.

As a Parkinson’s Foundation Center of Excellence — one of only 31 nationally — the USC Parkinson’s Disease and Movement Disorder Center hosts physician-researchers with years of experience with the disease. “We can do a lot to treat this,” Togasaki says. That includes carefully balanced and customized medications, physical therapy and exercise, and in many cases, surgery.

As they offer these methods to patients, physicians can also tell them one thing for certain: Their brains produce too little dopamine, the chemical that controls movement. By the time most patients notice Parkinson’s symptoms and turn to a doctor for help, they’ve already lost a major portion of the special neurons — nerve cells — that produce dopamine in the brain.

Medications mainly focus on treating symptoms by stimulating the dopamine system or getting more dopamine back into the brain. They don’t keep the disease from progressing.

But thanks to new insights in cellular biology, scientists are following some clues that might finally lead to a cause — and solutions.

They’re looking intensely at a type of protein found in the brain called alpha-synuclein. This protein may clump together in Parkinson’s patients, damaging cells. Scientists call these deposits Lewy bodies, and they’re also linked to some dementias.

USC is among a select group of sites for a national clinical trial of an engineered antibody called prasinezumab to try to halt the spread of alpha-synuclein proteins. This study has finished enrolling patients, but it is just one of a variety of clinical trials for potential new treatments at the USC Parkinson’s Disease and Movement Disorder Center, which offers the largest number of clinical trials for Parkinson’s and other movement disorders in Southern California. 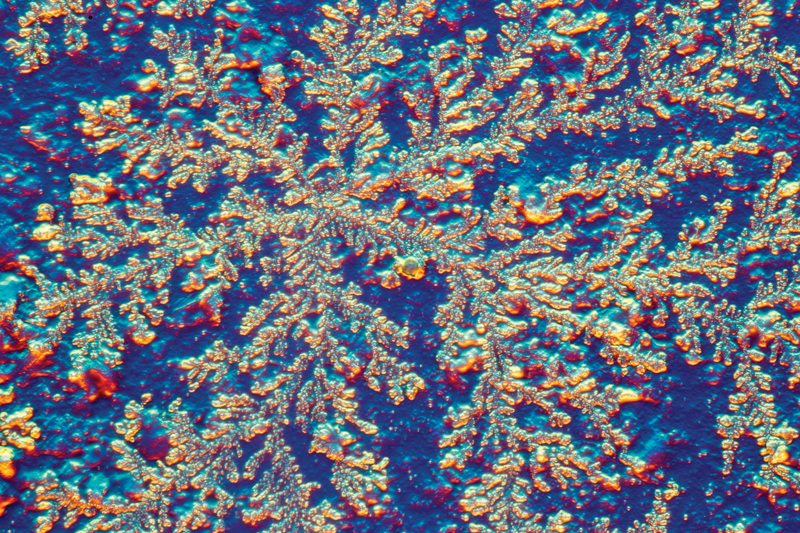 USC scientists are studying a protein found in the teardrops of patients with Parkinson’s. Shown here are crystals of tear residue seen under a microscope. (Photo/Alfred Pasieka/Science Photo Library)

To more accurately diagnose the disease, scientists are looking for what are called biomarkers: signs of Parkinson’s that can be found in blood, tissue and other fluids or through tools like imaging scans.

Scientist Sarah Hamm-Alvarez, USC professor of ophthalmology and pharmacology and pharmaceutical sciences, collaborated with Mark Lew, vice chair of the Department of Neurology and division chief for movement disorders, to look for signs of Parkinson’s in an unexpected place: the tears from our eyes.

Building on previous discoveries about alpha-synuclein proteins, the researchers found a higher amount of a toxic form of the protein aggregated in the tears of Parkinson’s patients compared to levels in those who didn’t have the disease. “These were very exciting changes to us,” she says.

Hamm-Alvarez and her team are looking for Parkinson’s patients and healthy volunteers to extend these studies, but this time to see if the levels of proteins change as the disease progresses. They’re especially interested in finding people at the earliest stages of disease. The goal, she says, is not only to one day create a definitive, non-invasive and affordable test for Parkinson’s, but also to measure how well any given therapy is working for a group of patients, or even for each particular patient, by using tear biomarkers.

While science maps out possibilities for the future, USC physicians are also improving the lives of Parkinson’s patients today.

Keck Medicine neurologist Giselle Petzinger studies the benefits of exercise for Parkinson’s patients. She believes that exercise can improve the thinking process in these patients and cites activities that promote skill learning (like tai chi or surfing) and also require adjusting to changing environments. A person used to riding a bicycle on city streets could try a mountain bike, for example. The idea is to create what she calls “cognitive loading,” or challenging the brain to manage a physical skill and a new environment at the same time.

“The brain responds to challenges in a novel situation,” she says, “even in the context of a disease.

Physical activities that require planning and strategizing movement may, through practice, engage and strengthen the same top-down processing and attention required for healthy thinking. While exercise isn’t necessarily a cure, it’s an important part of treating neurological disorders — and researching its effects might lead to identifying targets for novel drugs.

Exercise and drugs help, but patients may find they need increasing levels of medication to control symptoms.

We don’t want to just practice medicine. We want to help develop the next big thing.

The standard medication given to Parkinson’s patients, Sinemet, boosts dopamine but also induces its own kind of involuntary movements. Called dyskinesia, the movements look like fidgeting. Eventually, the burden of juggling drugs and their side effects along with symptoms may become intolerable, and that’s when patients head to neurosurgeons like Brian Lee.

Lee specializes in deep brain stimulation, or DBS. In this procedure, surgeons implant electrodes in the brain and connect them to an electronic device secured beneath the skin on a patient’s chest. The device sends electricity to the brain, disrupting abnormal brain signals and allowing normal brain signals to take over. This can control many of the disease’s physical symptoms, allowing patients to cut back on medications.

“It doesn’t cure the disease,” says Lee, director of the DBS surgical program at Keck Medicine. “But it can make a dramatic difference in people’s lives.”

USC is the only medical center in Southern California that can perform DBS implantation surgery using MRI guidance while patients are asleep. About 80 percent of patients now choose this option, Lee says. Those who decide to stay awake, though, may help scientists better understand how Parkinson’s works in the brain.

While in the operating room, these patients can opt to take challenging memory or word construction tests so that researchers can record how certain brain cells react.

Lee and other physicians hope that such testing uncovers enough of the structure of the disease that scientists can start not only to treat the symptoms, but also begin to fix the problem.

He is particularly excited about the potential for his latest research into brain computer interfaces. He’s been working with paralyzed patients to enable them to use brain signals to control a robotic arm. He hopes a version of the technology will someday help Parkinson’s patients.

“This is where neural engineering and medicine collide,” he says. “USC has made a concerted effort to bring more surgeon-scientists to this campus, because at an academic medical center like USC, we’re trying to push the envelope. We don’t want to just practice medicine. We want to help develop the next big thing.” 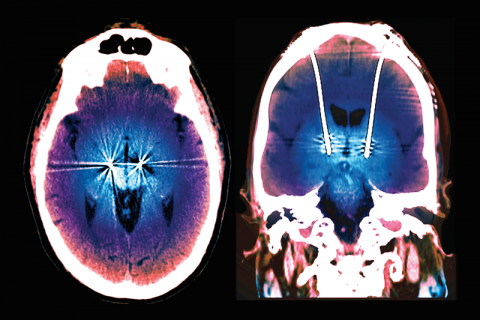 In Parkinson’s disease, too little dopamine is produced in part of the brain. This photo shows a magnified view of dopamine crystals under polarized light. (Photo/ Karl Gaff / Science Photo Library) Unraveling Parkinson's

For Parkinson’s Patient, a ‘Mobility Miracle’

After undergoing deep brain stimulation, Robert Warner can once again drive, type and work out. 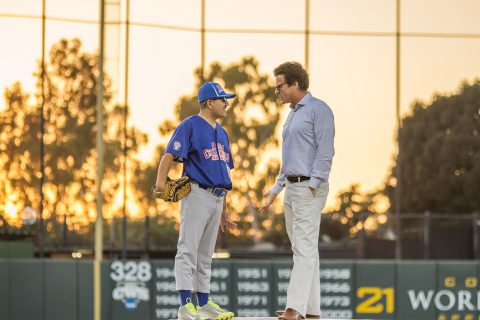 In Parkinson’s disease, too little dopamine is produced in part of the brain. This photo shows a magnified view of dopamine crystals under polarized light. (Photo/ Karl Gaff / Science Photo Library) Brain trust 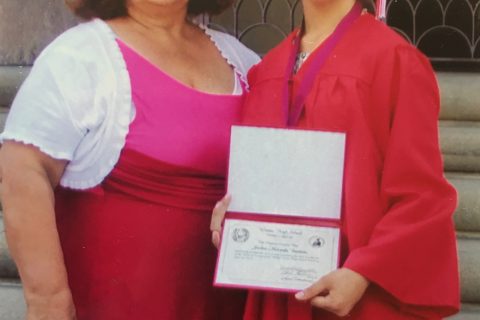 In Parkinson’s disease, too little dopamine is produced in part of the brain. This photo shows a magnified view of dopamine crystals under polarized light. (Photo/ Karl Gaff / Science Photo Library) Brain Trust