Ninety percent of the world’s data was created in the last two years. What we do with it will change the future.

We’re living in the age of Big Data.

“We are on the cusp of an amazing wave of innovation, productivity and growth … all driven by Big Data,” a 2011 McKinsey & Company study concludes. USC computer scientists, electrical engineers and other researchers are at the vanguard of this technological revolution. Read on to learn about four ways that USC researchers are harnessing Big Data to change the future.

“Moneyball”—the use of statistics to guide decisions in sports—has its believers in today’s NBA. Researchers call it quantitative analytics, and it’s increasingly influencing decisions in the front office and on the court. Two USC Viterbi School of Engineering computer scientists are major players in the movement.

Rajiv Maheswaran and Yu-Han Chang have spent the past two years analyzing data captured by video cameras mounted high in the rafters of several NBA arenas to unlock the mysteries of what constitutes good offense and defense. Their aptitude at making sense of the rivers of data generated by SportVU, an optical tracking technology originally created for incoming missiles, earned them the top research award at the 2012 MIT Sloan Sports Analytics Conference—a sort of Super Bowl for the sports-data obsessed.

Currently, 15 NBA teams in search of a competitive advantage use the SportVU data-gathering system. Among them is one of the teams that made the 2013 NBA Finals: the San Antonio Spurs.

Maheswaran and Chang can do a lot with the data. Both big sports fans, they looked at more than 70,000 shots, including the position of the shooters and defenders before, during and after field goal attempts.

Maheswaran and Chang also create individual player profiles that show offensive and defensive tendencies, rebounding stats, and shooting analytics such as shot selection on the court and accuracy under increased pressure. That’s invaluable information for an NBA team.

“We can also do this for soccer, football, hockey,” Maheswaran says, “basically any sport that has movement.”

Taming of the News

What do Lady Gaga, President Barack Obama and Justin Bieber have in common? They not only make news, but they shape it as never before.

Amid an explosion in social media, journalists at some of the nation’s most prestigious publications are increasingly turning to influential Twitter accounts for story leads. A prominent actress’s tweeted naked pictures of herself to a married co-star can easily become tomorrow’s front-page entertainment news.

By using statistical modeling and algorithms, Liu and her USC research team are studying social media’s growing impact on traditional news coverage. Simply put, some of society’s most prominent public figures can now take their unfiltered messages directly to the people through Twitter, leaving the mainstream media to play catch-up.

“More athletes, movie stars and other high-profile people are using Twitter, and the numbers will continue to grow,” Liu says.

While Twitter democratizes news by enabling people to report their own news on equal footing—in 140 characters or fewer—some celebrity newsmakers-turned-reporters are more equal than others.

Over 10 weeks in early 2012, Liu and her team reviewed more than 87,000 tweets from the 2,000 most influential Twitter accounts. The researchers combed through Google News and other aggregators that house millions of articles to track down which tweets later appeared in mainstream media.

Of the tweets picked up, Liu said, 50 percent came from the entertainment world, 30 percent from sports, 10 percent from politics and 10 percent from other sources. Lady Gaga and Justin Bieber, as measured by the number of followers and media hits, were the most influential tweeters.

Liu hopes to extend her Twitter research to model “buzz trends” to make predictions about future hot news topics. She sees a bright future for Big Data in making sense of it all.

“Big Data is what’s happening this century,” says Liu, whose research also includes studying climate change and gene regulatory networks. “From business to health care to energy, Big Data is going to have a huge impact.”

Cyrus Shahabi knew there had to be a better way.

Day after day, the director of USC’s Integrated Media Systems Center (IMSC) and professor of computer science and electrical engineering braved bumper-to-bumper traffic from his Irvine, Calif., home to USC’s University Park Campus and back again. Online traffic alert services, which often use delayed data, weren’t much help. Tired of wasting hours a week breathing car fumes and fighting freeway fatigue, Shahabi decided to do something about it.

And so he has.

The time is right for ClearPath. Traffic data provider INRIX last year named Los Angeles as the nation’s second-worst city for gridlock, with drivers wasting about 56 hours per year in traffic. Nationally, traffic represents an annual $121 billion drain on the American economy, according to the Texas Transportation Institute’s 2011 annual Urban Mobility Report.

ClearPath is so smart it can tune its traffic reports according to time, date and weather conditions. It could potentially help drivers make split-second decisions that would cut their drives home or shorten their long-haul freight times. To the average driver, this could mean fewer headaches and less road rage. On a national level, shorter commute times might increase productivity and conserve valuable energy resources.

Eager to test the system, Demiryurek and other ClearPath team members drive routes suggested by their app and compare them to those recommended by services such as Google Maps. They find the app beats the competition even though it often suggests surface streets to avoid gridlock. Competitors typically try to push drivers onto freeways, even when the freeways are jammed.

The ClearPath team is trying to raise money from investors to develop apps for such high-traffic cities as San Francisco, New York and Chicago. Seed money came from the USC Stevens Institute for Innovation.

Shahabi is using ClearPath himself, and he’s seen his commute time drop precipitously. Much to Shahabi’s surprise, ClearPath often suggests he take the 5 Freeway north at about 9:30 a.m. and come home on the 5 Freeway south between 7:10 p.m. and 7:30 p.m., depending on the day. Shahabi had previously avoided that freeway at all costs.

Parkinson’s disease often starts gently, its tremors and stiff muscles the only sign of illness. This incurable movement disorder worsens over time, though, and can rob the physical independence of those living with it.

In the future, technology from video games could keep an eye on people with Parkinson’s in their own homes, noticing important physical changes and alerting caregivers about them. That could protect patients’ health—and self-sufficiency.

Here’s how it works. Video game consoles with 3-D sensors, such as Microsoft Kinect, would track a patient’s movements around the house. Smartphone apps and body sensors could capture additional information.

Algorithms developed by the iHealth team would analyze the massive amounts of data to uncover significant changes in movement as they happen.

“Our system will allow patients and their caregivers to monitor disease progression and the effectiveness of treatments in real time,” says Cesar Blanco, project leader and head of research and development for the Alfred E. Mann Institute for Biomedical Engineering.

If a patient just loses a little flexibility or range in movement, iHealth might simply alert the patient and his or her caregivers about exercises that could better manage symptoms. With major mobility changes, the system would immediately contact physicians, who could change drug dosages, prescribe new medications or take other action. Currently, doctors have no way to effectively monitor patients between office visits other than asking them to check in if symptoms worsen.

The system might help prevent accidents, as well. Parkinson’s patients are at greater risk for hip fractures because of the disease’s impact on balance, and iHealth’s increased surveillance could decrease the number of such injuries. In the process, it could reduce pain, suffering and medical costs among the up to 1 million Americans with Parkinson’s—which is more than the combined number of people diagnosed with muscular dystrophy, Lou Gehrig’s disease and multiple sclerosis, according to the Parkinson’s Disease Foundation.

Possible applications extend beyond Parkinson’s to encompass strokes and other mobility disorders. iHealth could even monitor the posture of weight lifters and factory workers to prevent repetitive motion injuries, including carpal tunnel syndrome.

Caroline Black is a postdoctoral fellow with AbbVie and the USC School of Pharmacy. (Photo/Courtesy of Caroline Black) Final Frontier

From peering into deep space to looking for signs of life on Mars, Trojans are going where no human has gone before. 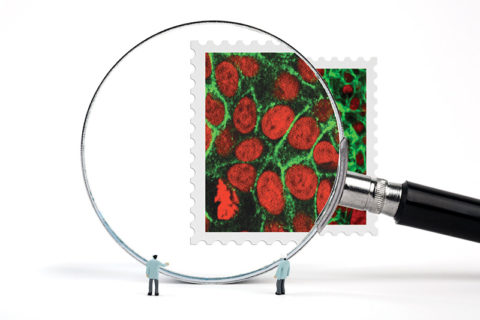 Caroline Black is a postdoctoral fellow with AbbVie and the USC School of Pharmacy. (Photo/Courtesy of Caroline Black) Small Wonder

Caroline Black is a postdoctoral fellow with AbbVie and the USC School of Pharmacy. (Photo/Courtesy of Caroline Black) Mind Matters

A new approach could help doctors diagnose and treat patients within the critical first hour after an accident.