Masako Miura, a Physician Ahead of Her Time

When Masako Kusayanagi Miura graduated in 1941 from what was then called the USC School of Medicine, the certificate she received congratulated “him” on “his” accomplishment. Since she was one of only two women getting a medical degree alongside 45 men, she brushed it off as an honest mistake.

Miura, who celebrated her 100th birthday on June 29, might be the oldest living alumna of what’s now known as the Keck School of Medicine of USC—and possibly its most humble.

“I guess I got in because I got pretty good grades,” says Miura, who also was an undergraduate at USC. “Pretty good grades” is her modest way of saying she graduated Phi Beta Kappa in chemistry in 1936.

It seemed to me the doctors had more say-so, and that was what I wanted.

Medicine appealed to her desire to help people in distress. At the time, it was far more common for health-minded women to attend nursing school, but being a physician appealed to Miura because she likes being in charge. “It seemed to me the doctors had more say-so, and that was what I wanted,” she says.

These days Miura looks back fondly on medical school. Her studies were challenging but interesting and she fit in well in the male-dominated classrooms. “I made a lot of friends,” she says.

A far bigger personal and professional challenge came soon after she graduated from medical school. She had barely started her residency at Los Angeles County General (now known as LAC+USC Medical Center) when the United States entered World War II after Japan’s strike on Pearl Harbor. She and her then-husband, James Goto, a fellow USC medical school graduate she met while both were students, were sent to an internment camp for Japanese-Americans. 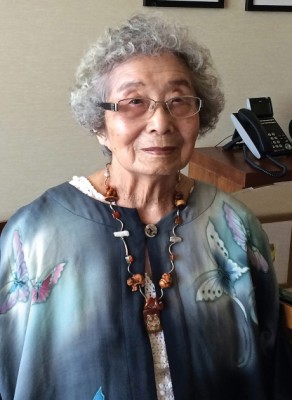 Masako Miura was one of two women in the graduating class of 1941 at USC’s medical school. (Photo courtesy of Masako Miura)

They ran the hospital at Manzanar, a camp in California’s Owens Valley, with five other doctors, all Japanese-American internees. More than 10,000 people were crowded into the camp’s barracks. “We were always working,” Miura remembers.

The physicians dealt with every kind of illness and injury, from simple colds to the gunshot wounds many of internees suffered during Manzanar’s riots. For what she says was the most difficult assignment of her career, she and the other doctors were paid $19 a month.

Miura and Goto were transferred to a camp in Topaz, Utah, in 1943. At the close of the war, they returned to Los Angeles to run a medical practice in Little Tokyo.

Miura still thrusts her fingers skyward in a victory salute every time she hears the first note of “Fight On.”

“They let people pay them however they could—boxes of celery or a bag of peaches,” recalls Miura’s daughter, Denise Kodani ’60, PharmD ’67. Most of their patients also were Japanese-Americans just released from internment.

After many years in private practice in general medicine, Miura decided to specialize in dermatology. She continued working almost until her 80th birthday. Kodani adds that Miura has never boasted about her professional achievements, but she has always been proud of her affiliation with USC. In part because of her mother’s prodding, Kodani also attended USC, first as an undergraduate and then again for pharmacy school.

Kodani says one of her mother’s favorite rituals is making the pilgrimage from her home in Watsonville, California, to USC for Half Century Trojans functions at least once a year.

Stepping onto campus again, more than eight decades since she did so for the first time as a freshman, remains a thrill for Miura, and she still thrusts her fingers skyward in a victory salute every time she hears the first note of “Fight On.”

You Know Sugar is Bad for Your Kids. Here’s What You Can Do

Now Might Be a Great Time to Invest in Health Care

Entrepreneur and investment expert Jay Goss made a career out of betting big on disruption and health innovation.

Masako Miura, a Physician Ahead of Her Time