Jacob Agi always knew he wanted to be a lawyer, but he never saw himself as a criminal defense attorney. The USC Gould School of Law student knew he needed courtroom experience but gave little thought to the intricacies of the criminal justice system. For him, issues surrounding victims and perpetrators played out in black and white, like cases in a textbook or an episode of Law & Order.

But that all changed last summer when Agi joined the Post-Conviction Justice Project, one of the law school’s clinics that give students real-life experience representing prisoners in California. He’s visited lock-ups and sat across from inmates with seemingly lost-cause cases. His recent clients include men serving life sentences without the possibility of parole for offenses they committed when they were teenagers.

We take criminal law in class and read the cases where this person killed that person, and it’s just sort of theoretical … But when the person is in front of you, it becomes real.

Suddenly, crime was no longer something remote. Criminals had a history, a family, a life before prison and the potential for a productive life afterward.

“We take criminal law in class and read the cases where this person killed that person, and it’s just sort of theoretical, right?” Agi says. “But when the person is in front of you, it becomes real. When I see what good people they are and how much they’ve worked [to deserve release], and still they’re just not being heard because of this thing they did 20 years ago, I just want to rip the doors of the prison cell and let them go!”

Due in large part to the work of the students and professors with the Justice Project—and their allies—prison gates have been opening for more inmates who show they no longer pose a threat to society. The project leaders, along with Human Rights Watch and other advocacy groups, have spearheaded a national effort over the past few years to reform the legal standards that allow harsh sentencing terms for juveniles. The United States, they note, is the only nation in the world that sentences minors to what lawyers often call LWOP—life without parole.

The Justice Project lawyers have fought to overturn what they consider extreme sentences for clients convicted when they were juveniles, arguing that teenagers, because of their inherent immaturity, deserve a second chance.

Their arguments are based on recent scientific research into adolescent brain development impetuosity that shows teens’ susceptibility to peer pressure and emotional impulse. Legally, they are much less culpable for their actions than adults, and are much more capable of rehabilitation. These arguments have started gaining traction with federal and state lawmakers and judges. In a landmark 2012 ruling, the U.S. Supreme Court declared mandatory LWOP sentences for juveniles to be cruel and unusual punishment, and thus unconstitutional. In the wake of that decision, California passed the Fair Sentencing for Youth Act, allowing certain juvenile LWOP inmates to petition for resentencing to a parolable life sentence after 15 years. The law, co-sponsored by the Post-Conviction Justice Project, gives some 300 current convicts at least the hope of a life beyond prison walls for a new start.

It’s really eye-opening for the students to see that they have an impact on how the law is changing.

In December 2013, Edel Gonzalez, a former Santa Ana, Calif., gang member incarcerated 23 years ago when he was 16, became the first person to be resentenced under the new statute. Though he has a long way to go, a light has appeared at the end of what was once a hopelessly dark tunnel.

For an attorney in training, there’s no better learning experience than seeing firsthand how lawyers can change society.

“It’s really eye-opening for the students to see that they have an impact on how the law is changing,” says Heidi Rummel, the USC Gould professor who co-directs the Justice Project with fellow professor Michael Brennan. “It’s a great experience to know that they can affect the law by being good lawyers and arguing a case well.”

For Agi, the experience has opened more than his mind.

“Even if you come in to the clinic to get practical legal skills,” he says, “you leave really understanding your clients, and developing your heart.”

In addition to the recent research about the adolescent brain and the groundbreaking Supreme Court ruling, a confluence of social factors have brought about sweeping changes in the way courts treat juvenile crime. First, with crime rates dropping, media scrutiny and public calls for action have subsided. Meanwhile, California has seen a crisis of prison overcrowding, forcing a reassessment of hardline policies that meted out sentences of 100 years or more, amounting to de facto life terms.

Rummel sees signs of a “sea change” in the way these cases are handled. Just this year, another law took effect that automatically grants parole eligibility after 15, 20 or 25 years to inmates who committed crimes as juveniles. The law, also co-sponsored by the Justice Project, affects as many as 6,000 inmates.

“California is leading the country in developing laws to address extreme sentencing for juvenile offenders,” she says. “We’re the model for other states right now.”

The outlook was not so rosy a few years ago when Rummel first considered taking over as the clinic’s director.

Founded in 1981, the Post-Conviction Justice Project has represented more than 4,000 clients, with an emphasis on women who committed murder, often related to domestic abuse. The project recently expanded its focus to include the juvenile cases. In the past 20 years, it has won the release of more than 70 inmates.

But prior to the recent legal and political developments, each victory was rare and hard-fought.

As head of the project, the former federal prosecutor knew she’d have to find a way to motivate students trying to learn the practice of criminal defense while they learned how to handle defeat. She remembers one dejected student who came to her after working on a few seemingly hopeless cases. “I can’t keep doing this,” the student confided. “I’m just drained.”

Rummel searched for something to say to keep him going.

“Back then, all I could tell students was, ‘Look, you’re making a difference in her life, whether she ever gets out or not. She has hope. You believe in her. And just the fact that you’re fighting for her is significant in her life.’”

After graduation, that student, Chris Cowan, went on to join a prestigious law firm. One day, Rummel recalls, he called to ask if there was any case from the Justice Project his firm could take on pro bono.

Indeed there was. The case of Edel Demetrio Gonzalez.

WHEN GONZALEZ was sentenced on April 26, 1993, he became the youngest person in Orange County history to receive life without parole. It was the same month he turned 18.

He’s been in jail continuously since his arrest two years earlier for his participation in an attempted carjacking that left Janet Bicknell, a 49-year-old teacher’s aide, dead. Gonzalez, then 16, was charged with the murder, along with four fellow Santa Ana gang members, including his 21-year-old brother.

Although he didn’t pull the trigger and claimed he didn’t know his cohort was carrying a gun, Gonzalez received the same sentence as the 19-year-old shooter—life without parole.

Although he didn’t pull the trigger and claimed he didn’t know his cohort was carrying a gun, Gonzalez received the same sentence as the 19-year-old shooter—life without parole.

At the time, Gonzalez was so young that newspapers didn’t identify him by name. Since then, the details of his harsh upbringing have become the subject of court proceedings in an attempt to reduce his sentence.

Gonzalez was one of six children raised by a single mother, a Mexican immigrant, who worked long hours as a housekeeper. He never knew his real father and had two stepfathers, one who abused him and one who bought him beer. By the time he was 11, Gonzalez had joined a gang with his two older brothers “for acceptance and for a sense of family,” as he once put it.

He was drinking and smoking marijuana before he was old enough to drive. On the day he stepped in front of Bicknell’s car to steal it, court records show, he was intoxicated and following the gang’s orders.

The teen’s background elicited little sympathy at the time. Indeed, the victim’s brother called for the death penalty for all five defendants. “I believe they should be given the same punishment they gave Janet,” he told the sentencing judge.

Now, 22 years later, the argument made for resentencing Gonzalez to a parolable term boils down to this: He’s not the person he once was.

Gonzalez, who turns 39 this year, has now spent more time behind bars than as a free man. Though he had no hope of ever being released, he made the choice to stay away from prison gangs, has turned to Christianity and has repeatedly expressed deep remorse for the pain he caused family members, both the victim’s and his own.

He’s completed courses to control his addictions and manage his anger. He has studied to be a barber, a janitor, a carpenter and cabinet-maker. He has become an avid reader and is learning to play the guitar.

At his resentencing hearing, he had one more thing that weighed in his favor: the support of his family. 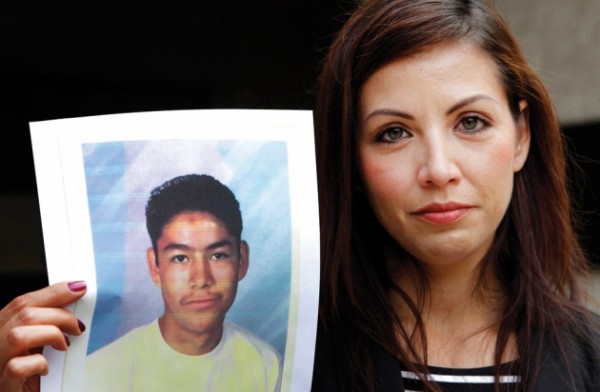 Lydia Oregel, whose brother Edel Gonzalez was sentenced to life in prison without parole as a teen, has stuck by his side.

“My brother, he’s made a lot of changes,” said his younger sister, Lydia Oregel, in a recent interview. “He’s worked his way to being a better person. I’ve seen him mature, and that’s why I support him.”

Of course, there is one thing that will never change: He can never bring back Janet Bicknell. Victims groups have been among the most aggressive opponents of new sentencing laws and parole policies, though even that seems to be changing. Rummel says there is a growing realization among families of both victims and perpetrators that violent crime claims casualties on all sides.

Nowadays, Rummel finds that winning isn’t so rare. Each time a client prevails in court or is released on parole, the group hangs a “victory flag” at the law school. The flag is actually an Afghan blanket that was hand-knitted by a client after she won her parole date. At the center of the blanket, a dolphin is depicted leaping out of the water.

“Now we’re a little spoiled,” Rummel says. “We’ve had an extraordinary number of wins in the last five years. The flag is always up.”

An individual's risk can be a combination of several things, and chemical pollution are high on that list. (Illustration/Jason Holley) Tech Talk

An individual's risk can be a combination of several things, and chemical pollution are high on that list. (Illustration/Jason Holley) Feeling the Vibes

An individual's risk can be a combination of several things, and chemical pollution are high on that list. (Illustration/Jason Holley) Think Clean

Your Brain on Air Pollution

Research at USC is helping define the environment’s impact on the brain. Growing evidence links the long-term effects of dirty air to accelerated cognitive decline and dementia, and USC researchers hope to better understand environmental effects and gene-environment interactions on brain health.