In 2017, Emmy-nominated filmmaker Patrick Shen was lecturing and teaching filmmaking workshops in Jordan.

Shen’s documentaries La Source and The Philosopher Kings touched on the stories of janitorial staff in prestigious American universities—topics that seemed disconnected from Jordanian lives. But Shen noted that the emerging filmmakers in the workshops, who were addressing subjects ranging from drug addiction to racism in Jordan, were like him in one way: They were all “deeply committed to pouring their hearts into film projects.” 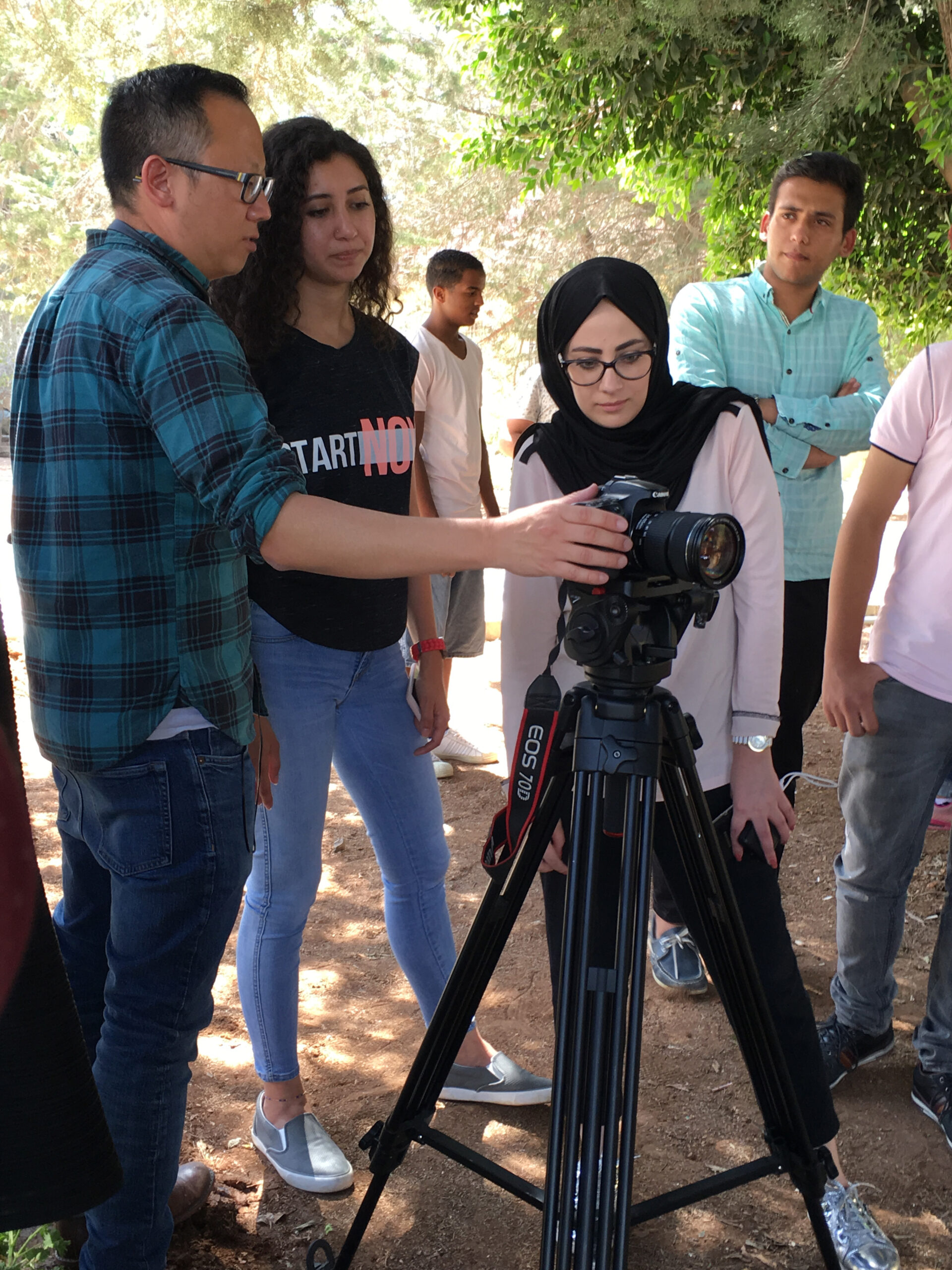 As a mentor, he encouraged them to tell their own stories. “Filmmaking is about developing the courage to exercise your voice unfiltered and straight from your being,” he says.

At the end of the workshop, the Jordanian embassy hosted a screening of the student films at a local theater. The resulting films “had a rawness and purity [that] … sparked dialogue around subjects important to Jordanians, important to humanity,” Shen says.

The audience response was palpable, generating conversations and standing ovations. “These cross-cultural engagements and deep connections make the world a bit smaller and more cohesive,” Shen says. “However small they may appear to be at the time, they can make the world better.”

Changing the world through storytelling may seem like a daunting task. But as a film envoy for the American Film Showcase (AFS), Shen is part of its mission to bring global storytellers together.

A film diplomacy partnership between the USC School of Cinematic Arts and the U.S. Department of State’s Bureau of Educational and Cultural Affairs (ECA), AFS has bridged cultures through filmmaking around the globe for more than 10 years.

The program has two components: First, it works with U.S. Embassies in more than 65 countries each year to produce person-to-person cultural exchange programs. Second, it tours an American film collection within these countries.

More than 60 American embassies around the world nominate up-and-coming international filmmakers for a chance to participate in a U.S.-based AFS cultural exchange—an intensive, two-week documentary workshop held at USC each summer where participants develop their first feature-length documentary. Only 12 make the cut, and the process is very competitive.

These filmmakers aren’t novices. Many have attended film school and made at least one film. They arrive at the AFS summer program with an idea or a film in progress and are led through structuring, developing and pitching their project.

“All these different cultures, societies and aesthetics are very stimulating,” says AFS founder Mark J. Harris, Distinguished Professor and co-head of advanced documentary production at the School of Cinematic Arts. “These films are windows into other societies in the world. In wanting to make a difference, many of these filmmakers are taking on sensitive subjects, and in doing so, risking their lives.”

These films are windows into other societies in the world. In wanting to make a difference, many of these filmmakers are taking on sensitive subjects, and in doing so, risking their lives.

Of the two-week exchange at USC, Gandin Mark says, “This is just a small part of the filmmaker training we do. Every year, AFS produces hundreds of master classes and workshops abroad, including 5- to 10-day filmmaking trainings led by American filmmakers and media experts.” Depending on the skills-building needs of the country, an AFS workshop may focus on screenwriting, animation producing, cinematography, or even digital content creation.

To support them, the school draws on the talent of its faculty and alumni, including Harris, Alan Baker, associate dean of Administration and International Projects, and Michael Renov, professor of Critical Studies and vice dean for Academic Affairs.

“We don’t impose a Hollywood aesthetic on the filmmakers,” says Harris, a three-time Academy Award winner and an AFS Emerging Global Workshop instructor. “Instead, we try to understand what they want to communicate and see how we can help them reach a Western audience.” Post-workshop, AFS participants return home to complete their films. 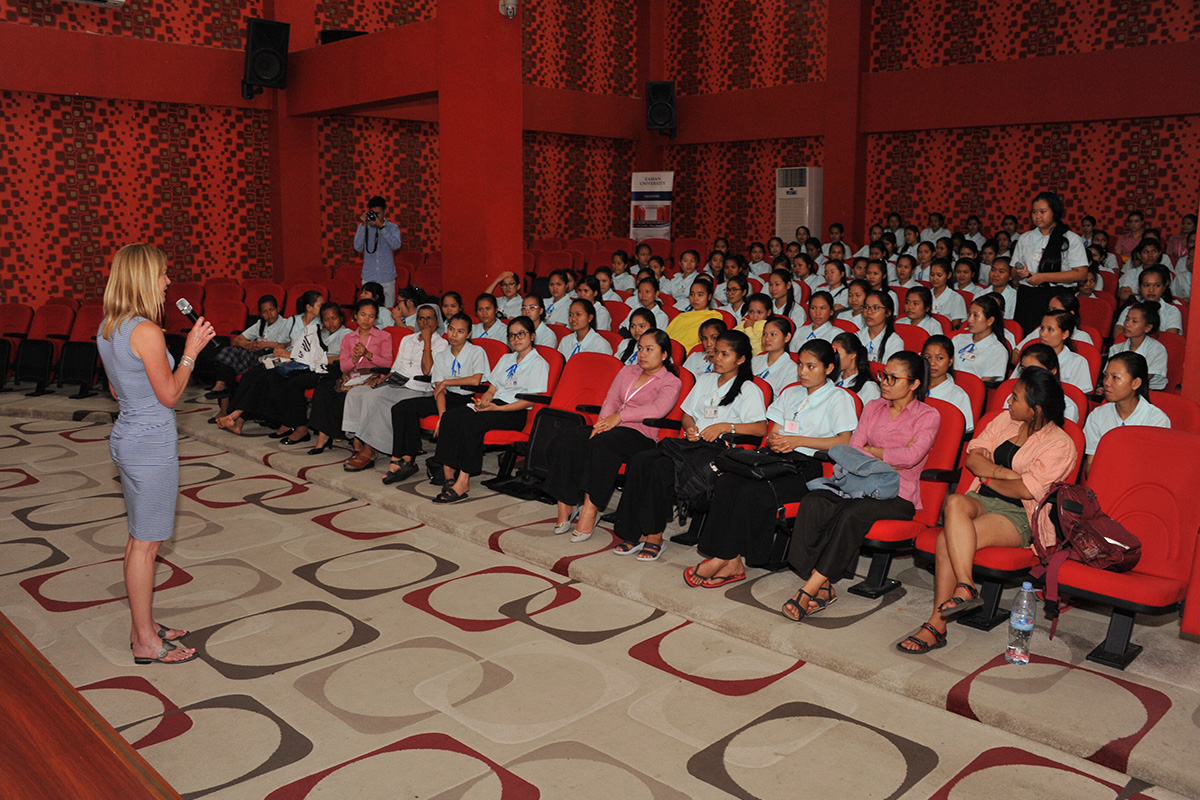 Robin Hauser speaks at a screening of her film Code: Debugging the Gender Gap organized by the U.S. Embassy in Phnom Penh and the Bophana Center at the Zaman University in Phnom Penh Cambodia. (Photo/Courtesy AFS)

The second component of AFS showcases American films around the world. U.S. embassies work with AFS to choose the touring films. “The idea of sharing these films abroad is to show audiences from other countries that we have shared problems, and here’s how Americans are addressing these issues,” Collins says. “The films are a direct way to connect, see, and learn. They challenge assumptions and dispel stereotypes.”

Gandin Mark says the chosen works are stories dealing with some of the darkest parts of our history, including racism, failing school systems, sex trafficking and violence. “We’ve seen actual policy changes due to these films,” Gandin Mark says, pointing to an American documentary about food insecurity screened in Uganda. “A government official who attended a screening reversed his perspective on genetically modified organisms.”

Beyond expanding the reach of U.S. filmmakers, participating in the showcase has other benefits, Harris notes: “You see both your film and your country from different perspectives when it’s shown in another country.” 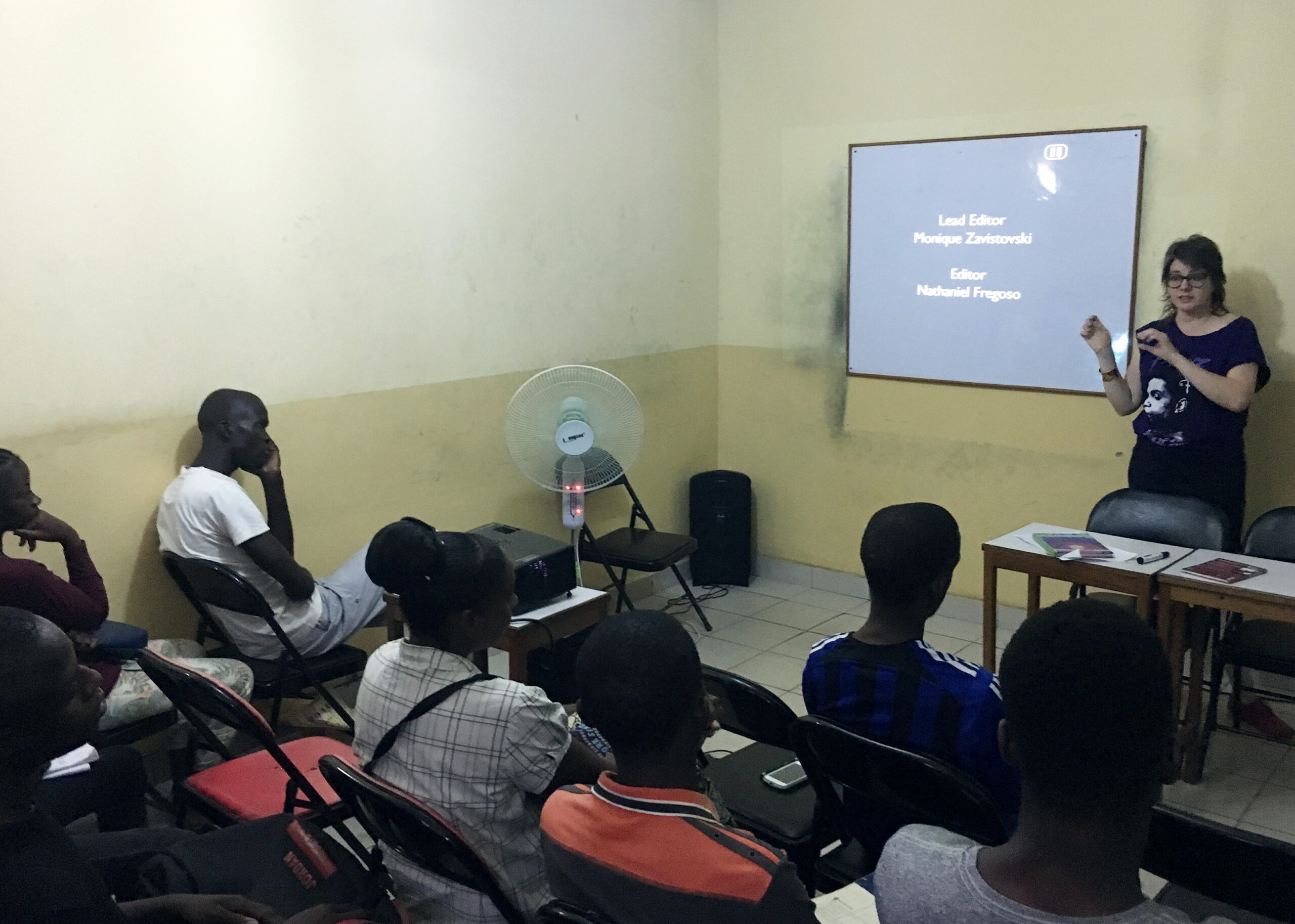 Laura Nix, a U.S.-based documentary filmmaker, got her start with AFS as a film expert and mentor, then worked with international filmmakers who attended AFS’s summer program at USC and traveled to Kinshasa in the Democratic Republic of the Congo and Brazzaville in the Republic of Congo.

Nix’s documentary, Inventing Tomorrow, was chosen to be featured in the touring film collection. Lauded by the Sundance Film Festival and New York Times Op-Docs, Inventing Tomorrow follows high school students from Indonesia, Hawaii, Mexico, and India who are addressing environmental issues by creating science projects for the Intel Science and Engineering Fair.

Through AFS, Nix toured with some of the students from the film to locations throughout Indonesia, India and Greece. They made stops to meet the press, high school and college students, and local environmental activists. “It surprised me how much teachers struggle to explain the specter of climate change—a complex phenomenon both intellectually and emotionally—to students,” Nix says.

Hoping to help with this burden, Nix used screenings of Inventing Tomorrow as a springboard for conversations. “We had an incredible dialogue about what environmental issues students are facing in their communities, and how they’re using science to address them,” she says. “We also had conversations with local officials about how youth can be involved in dialogue and activities to create solutions.”

Nix says working with AFS “allowed me to develop a more complex understanding about cultural differences, and a deeper understanding of what we all share in common around the world.”

In the past 10 years, AFS has visited 124 countries, produced 280 programs, and reached 238,573 viewers worldwide. Beyond the numbers, Harris feels proud that he is helping filmmakers achieve their missions. “Through my participation, I feel that I, too, am helping make changes to society all around the world.”

When Title IX—the landmark legislation that prohibits sex discrimination in educational institutions that receive federal funding—was signed into law in 1972, it had an immediate impact at USC. Here, we celebrate the progress USC has made and the women who’ve helped pave the way for gender equity in all aspects of USC’s programming, from education to employment and extracurricular opportunities. 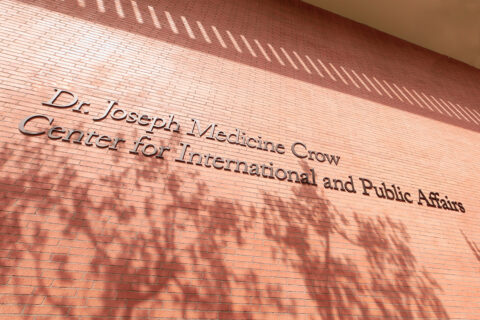 Renaming a landmark for historian and war chief of the Apsáalooke (Crow) Nation portends a new age for Trojans.