USC Sets the Bar for Occupational Therapy and Science

The USC Chan Division of Occupational Science and Occupational Therapy helps people live life to its fullest, no matter what challenges they face. 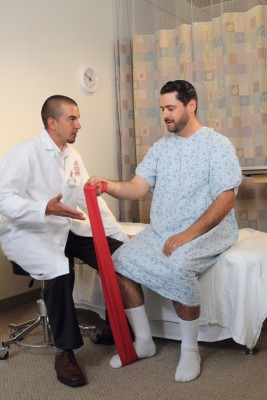 From the occupational therapist’s perspective, “occupations” refer not to your job but rather to day-to-day activities like brushing your teeth or cooking dinner. Many of us take these routine tasks for granted, but occupational scientists and occupational therapists recognize that for people with injury or illness, even the simplest tasks can be difficult. Occupational therapists work with people of all ages to develop new habits and routines that enable them to live happier and more productive lives, no matter what conditions stand in the way.

Veterans have a unique set of challenges. In addition to mental health concerns, such as post-traumatic stress disorder, anxiety and depression, they often struggle with vision and hearing. Tinnitus—persistent, strong ringing in the ears—is the most common disability among veterans. Among student veterans, tinnitus can make it difficult to listen to lectures and focus on coursework.

At USC, student veterans have an advocate and helper in Carlin Daley ’02, MA ’06, OTD ’07, an assistant professor of clinical occupational therapy. 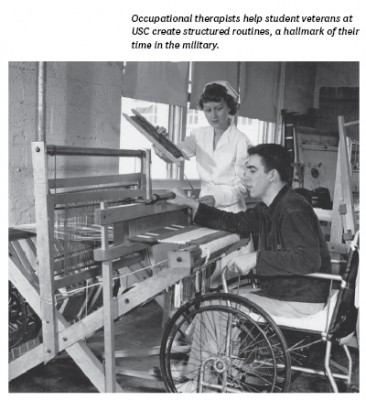 For one, Daley makes sure student veterans get the special accommodations they need. That could mean providing a note-taker during class or securing electronic versions of the documents for students with sustained vision or hearing loss.

“If for some reason an accommodation doesn’t seem to be working, students might be referred to me to see if I can figure out a different piece of the puzzle, because occupational therapists are trained to look at all elements of a person’s life,” Daley says. “I’m going to think about what’s happening psychosocially, physically and ergonomically, and combine that with the sensory piece to inform them of ways we can help them through other resources.”

Daley also frequently works with student veterans at USC’s Kortschak Center for Learning and Creativity to identify new habits and routines that could boost their academic success. She’s noticed that often student veterans struggle without a clear schedule, regular exercise and a sense of community—the hallmarks of military life. In these cases, she might help them create structured routines and come up with ways to build social and academic support networks.

“From the occupational therapy lens, it’s thinking about how our suggestions will fit in with everything else they are doing. I think that a holistic view is something that’s a unique strength of this profession,” Daley says.

Daley also has been active in military support and outreach efforts throughout the USC community. She’s been involved in the planning phase of the new USC Veterans Resource Center, which brought her occupational therapy expertise to discussions on the space’s layout and its programming and services. “There’s so much positive momentum with the veteran population here,” Daley says, “and it’s exciting that occupational therapy has such a strong voice in what’s happening. 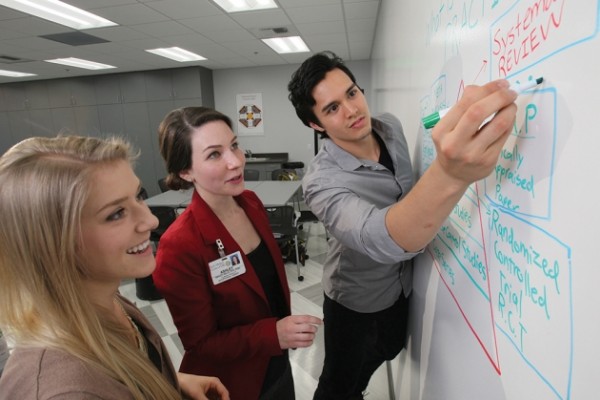 “Occupational therapists are trained to look at all elements of a person’s life,” says Carlin Daley.

Keeping the Weight Off for Good

For years, weight loss seemed impossible for David Morrison MRED ’90, a 62-year-old banker from Alhambra, California. At 328 pounds, even simple activities like walking and sleeping were difficult, and he couldn’t find weight-loss strategies that worked.

“For whatever reason, I was not disciplined enough to stick with a diet,” he says. “I didn’t want to play games with myself and pretend something was going to work when I knew it wouldn’t.”

In 2010, Morrison opted for a laparoscopic adjustable gastric band procedure—commonly known as lap band surgery—to limit the amount of food he could eat. But he couldn’t sustain the changes he needed to make and eventually regained the weight he lost after surgery.

Two years later, Morrison turned to Peter Crookes, associate professor of surgery with Keck Medicine of USC. Crookes performed gastric bypass surgery, a procedure that shrinks the stomach and reduces the number of calories the body can absorb.

This time, to make sure he had the support he needed to adjust to life after surgery, Morrison joined the Lifestyle Redesign Weight Management Program at the USC Occupational Therapy Faculty Practice.

In this program, patients meet regularly with an occupational therapist to develop new habits aimed at managing weight and reducing stress, like learning to cook more healthful food and fitting exercise into a work schedule. They also discuss emotional issues related to food.

After his operation, Morrison started meeting with Ashley Uyeshiro ’08, MA ’10, OTD ’11, an assistant professor of clinical occupational therapy, every one to two weeks. Uyeshiro worked with Morrison to create a customized plan that incorporated physical activity and a prescribed diet into his daily routines, as well as strategies to control portion sizes, which was especially important for Morrison because a bypassed stomach can eventually stretch from overeating. 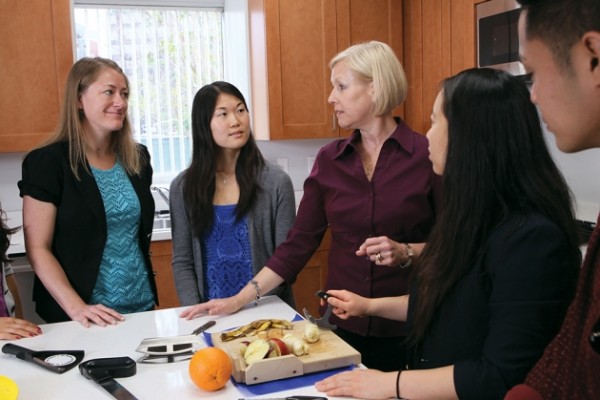 “I was lucky because [Uyeshiro and I] happened to work on the same wavelength,” Morrison says. “I would bring in my questions, and she would work with me on answering them.”

The treatment plan has been a huge success. Twenty-two months after the surgery, he weighs 189 pounds—a drop of nearly 140 pounds from his heaviest weight. More important, he’s discovered daily strategies that have kept the weight off and now sees Uyeshiro just once every six to eight weeks.

“I think the reason this program works is because our occupational therapists cater the education, the problem solving and the occupation-based activities to people’s unique situations,” Uyeshiro says. “We also hold people accountable for the changes they plan to make and equip them with the tools they need to self-manage their weight for a lifetime.”

A diehard Trojan football fan, Morrison says that being able to walk easily from his car to his seat at the Coliseum is a wonderful feeling. He’s also been enjoying watching people react to his transformation: “They’re in shock!”

Autism spectrum disorders affect 1 in 68 children and comprise the fastest-growing developmental disability in the United States. Researchers throughout the USC community—from physicians to filmmakers—are working together to try to improve the diagnosis and treatment of autism, and occupational therapists are among them.

“We’ve been examining some of the functional problems or challenges that families experience when they have a child or family member with autism, as well as developing better understanding of family strengths and expertise,” says Mary Lawlor, associate chair of research and professor of occupational science and occupational therapy. 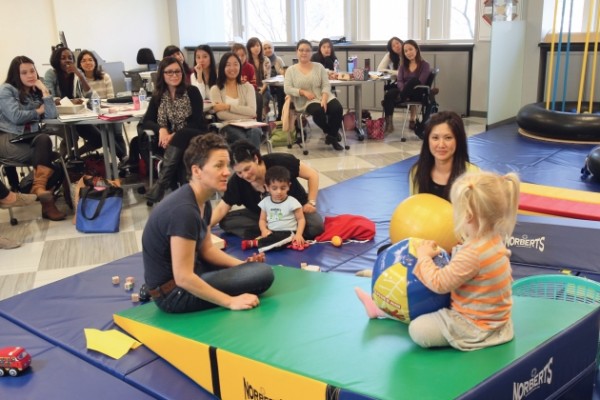 Frequently, for children with autism and their families, daily tasks like getting dressed or taking a bath pose unique challenges. Parents appreciate strategies that can improve their child’s engagement and participation in everyday life, and occupational therapy and occupational science professor Sharon Cermak is studying practical solutions.

Take the dreaded visit to the dentist. Cermak recently conducted a study on how to make dental visits more manageable for children with autism spectrum disorders. The glaring lights, harsh sounds and strong smells of a dental office can cause a sensory overload that triggers anxiety and disruptive behavior among these children. Dentists are sometimes required to use general anesthesia or restraints to safely clean the children’s teeth.

Cermak found that making some simple changes to the environment could help, such as replacing fluorescent lights with softer, colorful lights, playing soothing music and bundling children snugly in specially designed butterfly-shaped wraps, which provide calming pressure. With the modifications, children were much less anxious, according to her study.

“Down the road, we hope that we can design interventions that will lead to a better quality of life for children with autism and their families,” Cermak says. 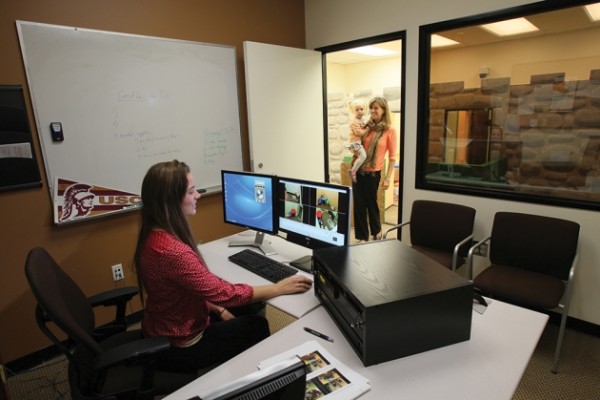 For the last 12 years, USC Chan Division has been ranked No. 1 in US News and World Report.

She’s already identified several areas where environmental adaptations can make a difference. For example, changing lights and cutting noise in school classrooms may help some children with autism learn better. “Fluorescent lights give off a flicker that’s not noticeable for most people, but can be highly irritating for children with autism. Just changing the lighting can increase their attention,” she says.

Findings from her research extend to the home. Many children with autism are highly sensitive to certain foods, which can strain family meal times. But making simple changes like dimming lights, playing soft music and limiting distractions could make mealtimes easier for these children.

Bedtime also poses concerns. Children with autism have a hard time falling asleep, and they experience less restful sleep than other children. But Cermak has found that warmth can help them relax. “Even putting their blanket in the dryer for a few minutes before bedtime can induce a calming effect,” she says.

When children with autism are given the tools to actively participate in daily life, Cermak says, they’re happy and thrive—and their families do too. 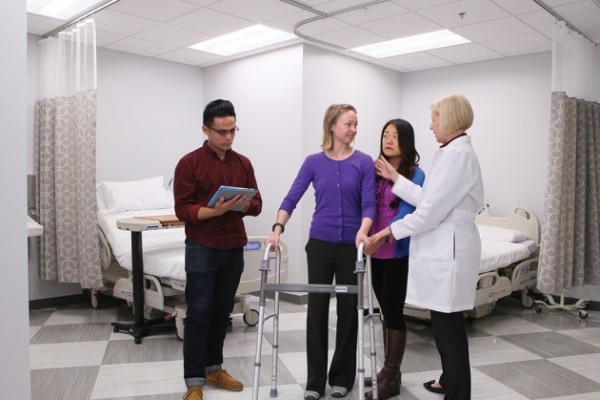 Helping patients adapt to life after disease or trauma is one part of occupational science.

USC Sets the Bar for Occupational Therapy and Science