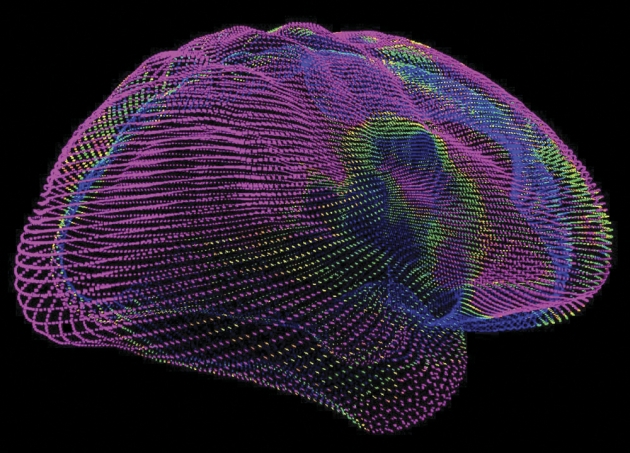 Two Leading ‘Mapmakers of the Brain’ are Revolutionizing Neuroimaging

“You will remember some things about this conversation, and that will change your brain.”

Just a few decades ago, the human brain was uncharted territory. The best maps looked like a hovering cloud, all shadowy contours and empty space, an X-ray of the soft tissue inside your skull.

So to get another view of how the brain worked, scientists poked around. Surgeons peered inside the heads of stroke patients and compiled directories linking visible damage to changes in behavior. Trying to understand the brain this way was a bit like opening a car hood and breaking part of the engine. You can bash the carburetor or pull out spark plugs and figure out that the car won’t start, but you’ll learn nothing about how the pieces work together.

It took the advent of magnetic resonance imaging (MRI) about 30 years ago to construct the first three-dimensional pictures of the brain. Then functional MRIs (fMRI) came along and hinted at the duties of different parts of the brain—which use the most resources when you read a book, for example, or when you listen to music.

“fMRI led to some incredible insights, but the problem is, we’re always thinking and moving. This data is superimposed on all of the extraordinary things the brain already does,” says USC’s Paul Thompson, professor of neurology, psychiatry and behavioral sciences, radiology, engineering and ophthalmology. “It was a little bit like looking at the city lights from an airplane.”

What scientists needed was a street view of the brain’s roadways, the 100 billion neurons and quadrillion connections in the human brain. Ideally, researchers could then overlay this atom-level anatomy with other maps, charting, say, the movement of drugs in the brain, much like meteorologists plot weather systems moving across a continent.

In April, the Obama administration announced its support for a grand project: the $100 million BRAIN (Brain Research through Advancing Innovative Neurotechnologies) Initiative. Just as scientists once united to map the human genome, BRAIN parallels an effort in China and a European program endowed with what works out to $1.5 billion in government support.

Some of the U.S. funds will likely go to refining scanning technology, but that’s just part of the challenge. fMRI and other scanning techniques produce no images, just strings of numbers that require computational algorithms to make sense. Researchers have a lot of digital information, says Arthur W. Toga, Provost Professor of Ophthalmology, Neurology, Psychiatry and the Behavioral Sciences, Radiology and Engineering. “But a lot of the data is, frankly, underutilized,” he explains. 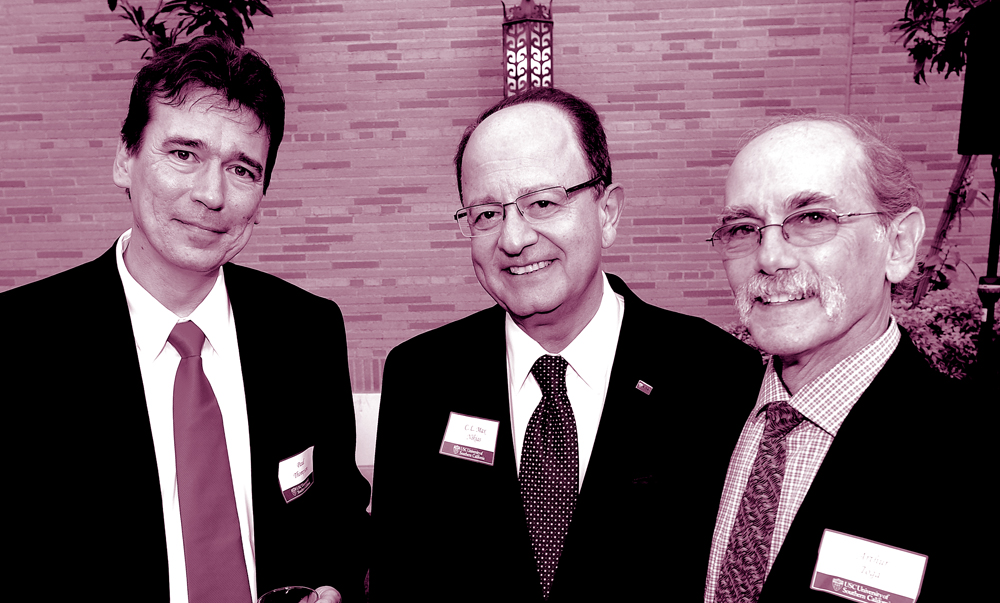 At the new USC Institute for Neuroimaging and Neuroinformatics, Toga and Thompson are leading mapmakers of the human brain. Their work straddles the worlds of biological science and engineering, bridging improved raw measurements to clinical treatments for diseases such as Alzheimer’s or autism. With about 100 faculty and data analysts, the institute houses a supercomputer, wet labs, a production studio and more than four petabytes of data (enough to render the special effects of a summer blockbuster movie four times over).

Harvard radiologist and leading imaging expert Bruce Rosen described Toga and Thompson’s group in the Los Angeles Times as “the world’s premier lab when it comes to finding insights about the brain in massive amounts of data from scans and genetic tests.” Another colleague, Michael Weiner, professor of radiology and biomedical imaging at University of California, San Francisco, told the Times, “It’s impossible to use hyperbole when you speak of [them]—they’re so outstanding.”

USC Provost Elizabeth Garrett recalls her first dinner with Toga during the recruitment process. “When I talk to scholars, researchers or creative artists, I listen to hear an excitement, almost an impatience, to accomplish all that they want to do,” she says. “We look for people who are driven by the sheer joy of discovery, the feeling that they can’t wait to begin the next project because they know it’s going to make an important difference. It was clear that Arthur and Paul have these qualities. Once you meet them, you can’t fail to be excited about the future.” 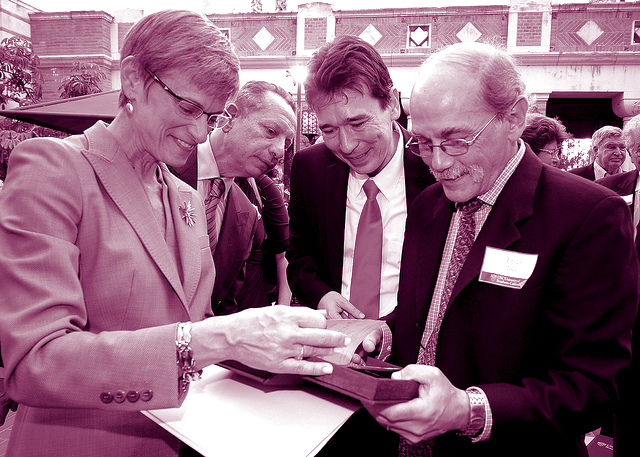 Among the researchers’ projects is the ENIGMA network, a 125-institution collaboration led by Thompson. The largest brain-mapping project in the world, ENIGMA enables scientists to sift out discoveries from mounds of data. “We’re all so different from each other that you need to amass a large amount of information before you can see patterns,” Thompson says.

Take ENIGMA’s work on HIV/AIDS. Researchers are beginning to understand that cocktails of HIV-fighting drugs, for all the lives they’ve saved, can’t suppress the virus in the cerebral cortex. Otherwise healthy people treated for HIV/AIDS for the last 15 to 20 years are starting to show early signs of dementia and memory loss.

The ENIGMA team developed a computer program for colleagues from places as diverse as Thailand, South Africa and Pittsburgh, to pull out relevant pieces of information from brain scans. These figures then filter to USC, where engineers take on the heavy number crunching, including cross-referencing the brain data with other medical history.

Early analyses already have yielded surprises. As the virus moves through the brain, it seems to skip over certain cells. The data shows  that HIV affects mostly the motor regions of the brain—the parts that control movement—and regions less affected by other disorders such as Alzheimer’s.

This border-crossing science symbolizes the possibility of collaboration that drew Toga and Thompson to USC. “We’d like to build a program that is not only an amalgamation of different disciplines, but the amalgamation of different data types across diseases, across subjects and across institutes,” Toga says. “We are going to extract more information from these various data types than has ever been done before.”

Another project from Toga and Thompson demonstrates the importance in brain mapping of the fourth dimension: time. The living brain is dynamic, and a single image might pick up a transient signal that disappears the next instant. “The brain is supposed to be adaptive—that’s how we learn. You will remember some things about this conversation, and that will change your brain,” Toga says.

Over a lifetime, some of these changes pile up. Toga and Thompson, who both hold joint appointments at the Keck School of Medicine of USC and the USC Viterbi School of Engineering, study the development of age-related diseases by visualizing how the healthy brain grows. With support from the National Institute for Mental Health, the researchers created a time-lapse arrangement of hundreds of brain scans taken from infancy to early adulthood. Toga’s daughters served as the first test subjects.

Thompson likens findings from the growth chart to being told by a pediatrician that your child is tall for her age, but underweight. “Imagine doing that for the brain,” he says.

In a landmark study in Nature, the researchers showed that the back of the brain grows rapidly in infants as senses of sight and touch develop. Growth then floods forward through parts of the brain associated with language acquisition. In the teenage years, the surge moves to the front of the brain, which is linked to decision making and judgment.

But perhaps the biggest revelation of seeing how the brain grows wasn’t that there might be a reason teenagers make stupid mistakes. To the researchers’ surprise, they discovered that the growing brain prunes itself, cutting of whole clusters of cells. Many parts of the brain actually shrink during adolescence. “When we first ran into it in the data, we thought we’d made a blunder, all this tissue loss,” Thompson says.

That was just the beginning. Turns out, schizophrenics’ brains shed mass faster than normal. And kids with autism tend to have bigger brains; some theorize their brains don’t go through enough pruning.

“It would seem like you need all of your brain, but you don’t,” Thompson says. “Clearly not all of it is absolutely vital—there’s some redundancy. But also, clearly, you can’t do without certain critical components.”

At the other end of life, our brains unravel in the reverse order of development, Toga and Thompson’s research has found. Just as infants develop sensory skills first, Alzheimer’s patients don’t lose their senses of sight and touch until the very end.

“We’ve learned more about the brain in the last 25 years than in all of previous history,” Toga says. “It’s one of the most exciting times to be a neuroscientist only because the techniques have finally caught up with the complexity of the problem.”

Still, there are many things that a map of the brain might never tell us, or that we might not want to know. Toga and Thompson’s advanced imaging can reveal Alzheimer’s about a decade before symptoms appear. For now, it’s like seeing a tidal wave before it falls, Toga says, but the scans will be critical to early treatment if an Alzheimer’s cure is ever found.

Thompson holds out hope that it will happen: “With these cryptic diseases in the brain, with a little bit of investment into figuring them out, you get a real leg up in treating them.”

Two Leading 'Mapmakers of the Brain' are Revolutionizing Neuroimaging