Five years ago, journalist Michael Ausiello ’95 asked Jim Parsons to interview him at a Los Angeles book signing for his bestselling memoir, Spoiler Alert: The Hero Dies: A Memoir of Love, Loss, and Other Four-Letter Words.

“Our rapport had always been easy and fun, so when I needed someone to moderate the Q&A, he was the first person I reached out to,” Ausiello says. “I knew he’d do a great job at it, and [it would be] a really fun time for me.”

“I gave him the book to read in advance, which sort of got the ball rolling,” Ausiello says. In this case, the ball rolled all the way to Parsons eventually portraying him in a biopic based on the book.

Like the book, the Focus Features film chronicles Ausiello’s 13-year relationship with his husband, photographer Kit Cowan, and the last year of Cowan’s life. Cowan, portrayed in the movie by Ben Aldridge, died in 2015 of a rare and aggressive form of neuroendocrine cancer. He was 42 years old, and his shocking stage 4 cancer diagnosis had come just 11 months earlier.

The film is titled Spoiler Alert, a phrase closely associated with Ausiello. He became well-known for getting the inside scoop on television shows and stars during his decades as a TV Guide and Entertainment Weekly columnist, then as founder and editor-in-chief of TVLine, a website devoted to information, news and spoilers of television programs.

“One of the tricky things is the story is born out of tragedy,” Ausiello says. “So, I often feel conflict about reconciling the feelings of sadness, remorse and pain with happiness, hope and excitement. But I’m grateful to be in a position to have a movie being made about the book because it means that people responded to it, responded to Kit and responded to our relationship.”

During Cowan’s illness, Ausiello would periodically post candid updates about his husband’s condition on Facebook for family and friends. Those poignant updates, often laced with the author’s trademark wit and humor, were widely read. Among those reading was Rakesh Satyal, an editor at Atria Books, an imprint of Simon & Schuster. A few months after Cowan’s death in February 2015, Satyal approached Ausiello about expanding on the Facebook posts and writing a memoir.

Ausiello completed the writing over 18 months. Even though reliving some of the most painful parts of his life so soon was difficult for the author, he was determined to tell the whole story.

“When I decided that I was going to write the book, I was either going to be honest with myself and my experience or not do it at all,” he says. “I didn’t see the point of sugarcoating anything. That’s what people are responding to. I’m not a perfect person. Kit is not a perfect person. And these two imperfect people found each other and fell in love.”

The darkly hilarious memoir received favorable reviews upon its release in the fall of 2017 and became a bestseller.

“I had no sense of whether people would respond to it, if people would buy it,” Ausiello says. “It wasn’t just waiting to see what people thought of the book. It was almost like, what they thought of me. It was a very, very vulnerable place to be in.”

Creating a career template at USC 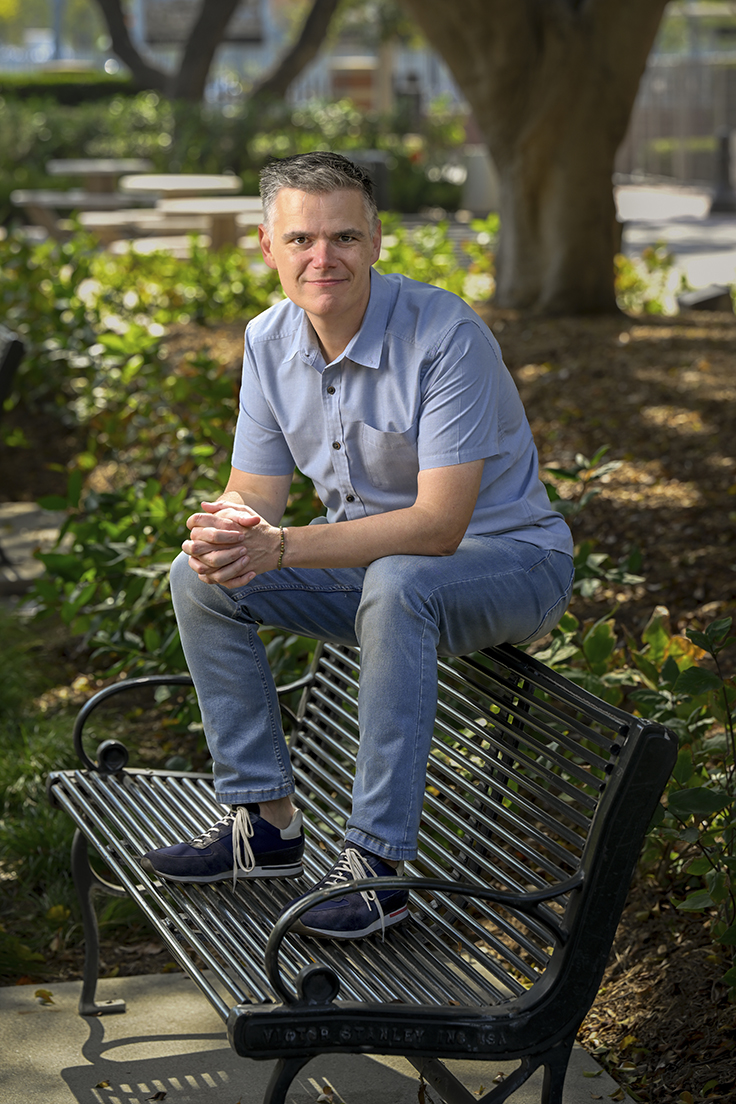 It all started at USC: Michael Ausiello recalls how his days at Annenberg informed his work as a TV journalist. He is portrayed by actor Jim Parsons in the feature film “Spoiler Alert” based on his 2017 memoir. (Photo/Gus Ruelas)

Ausiello quickly began establishing ties to the television industry and developing his confident, candid writing style as soon as he arrived at USC and started writing for the Daily Trojan, which had never had a television critic before Ausiello joined the staff.

The USC Annenberg School for Communication and Journalism student was determined to carve out a unique role for himself that involved his lifelong passion for television and pop culture. He got himself on mailing lists for advance screeners of all the television networks and started reviewing their shows.

Michael created his TV-centric niche at the Daily Trojan when he became the paper’s first TV critic and launched a column, ‘Short Cuts,’ which blended Hollywood buzz with TV spoilers and campus gossip.

“It was a precursor to his current career,” says Debra Ono, then USC Annenberg’s director of administration. “Michael created his TV-centric niche at the Daily Trojan when he became the paper’s first TV critic and launched a column, ‘Short Cuts,’ which blended Hollywood buzz with TV spoilers and campus gossip.”

Ono, now associate director of the executive MBA program at the USC Marshall School of Business, says that even back then, it was clear Ausiello was “a talented and witty writer” destined for a successful career in entertainment journalism.

Ausiello, who grew up in Roselle Park, N.J., had been crushed when he wasn’t accepted into the USC School of Cinematic Arts. With his heart set on USC and moving to Los Angeles, he instead majored in journalism with a focus on public relations and minored in cinema. He juggled his studies with playing clarinet in the Trojan Marching Band and working on the Daily Trojan.

He was among the critics to give high marks to The X-Files right out of the gate and reviewed “everything from cheesy TV movies to special episodes of Beverly Hills, 90210,” he says.

“It was so exciting to watch television shows before they aired — such a thrill,” Ausiello says. At the time, publicists didn’t often get requests to send preview tapes to a university for review; Ausiello recalls that they were excited to cater to a college audience. “I’d hear that people were enjoying ‘Short Cuts’ [because] it was different. It wasn’t about campus crime or sports, which was refreshing. It was fun, insider things, and it was a blast.”

Since he had been obsessed with television growing up, Ausiello was already predisposed to consuming lots of TV. While at USC, he found he enjoyed the rush of getting the new episodes — and also seeing his name in print.

“It all got me excited for what was to come,” he says. 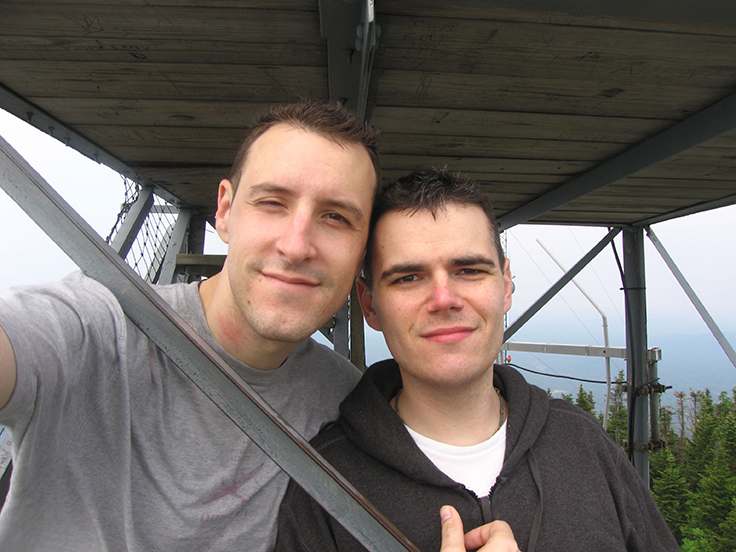 During that standing-room-only book signing inside Barnes & Noble at The Grove, it was clear Parsons had done his homework and been deeply moved by Ausiello’s book. Within six months, he and his husband, Todd Spiewak, had acquired the rights to make it into a film through their company, That’s Wonderful Productions.

Parsons says he felt “a strong connection” to Ausiello and Cowan’s relationship because so many aspects echoed his with Spiewak. Both couples met around the same time in New York City, and both Parsons and Ausiello were pulled to Los Angeles for careers related to the entertainment industry.

It was Michael’s journey through such intense love and intense heartbreak that resonated with me, the way it laid bare the things in life that are most important: love, empathy and forgiveness — especially of oneself.

“It was Michael’s journey through such intense love and intense heartbreak that resonated with me, the way it laid bare the things in life that are most important: love, empathy and forgiveness — especially of oneself,” Parsons says. “To me, those are the themes that guide this story and make it so relatable to so many people, no matter their life particulars.”

Principal photography for Spoiler Alert began in New York on October 2021 with Michael Showalter directing and a screenplay by David Marshall Grant and Dan Savage based on Ausiello’s book. Two-time Oscar winner Sally Field and Bill Irwin play Cowan’s parents in the film.

“I think [Kit] would be thrilled that a really hot actor with a really good body was cast to play him,” Ausiello jokes about Aldridge.

As an executive producer on the movie, Ausiello was on the set during each day of filming.

“The first couple of days on set just watching Jim reciting lines that I said, it was surreal,” he said. “I can’t imagine a better fit because Jim and I share a lot of the same sensibilities and sense of humor. It’s not an imitation of me. Jim made the role all his own.”

Parsons, a four-time Emmy winner for TV’s The Big Bang Theory, describes working with Ausiello on Spoiler Alert as “a joy from beginning to end,” and says great care was taken so that the film remained faithful to the heart of the author’s experience.

“It is, of course, daunting to handle someone else’s true-life story, especially one with such deeply emotional sections,” the actor says. “Michael was an invaluable part of getting this film made. But so much of what he gave us was in the book — a story he told with utter honesty and eloquence. That book was my bible throughout our work process, and I can never thank him enough for offering up the road map to what truly became, for me, a creative process of a lifetime.”

Expectations for the movie

The trailer for Spoiler Alert debuted in September during the opening weekend of Bros, the first gay-themed romantic comedy released by a major movie studio (Universal Pictures). Ausiello went with friends to The Grove in L.A. to see the trailer with an audience for the first time.

“It was super exciting and emotional for me to just see on the big screen,” he says. “It felt real. In the back of my head, I think I was in a little bit of denial. But seeing the trailer on the big screen made me realize this is happening. This movie is going to come out.”

Ausiello naturally wants “as many people to see it as possible,” but he refuses to get caught up in such Hollywood hot topics as Oscar buzz or box office expectations.

“I genuinely don’t have any expectations about any of it,” he says. “It’s such a hard position to be in, having written this book and being so attached to it. But the experience of [making] a movie is about letting go — in terms of control, but also of aspects of the story that were not going to fit. I knew the challenges of condensing it into a two-hour movie. I’m really happy with it and excited for people to see it.”