By now, most people know the unfortunate facts about lung cancer. It’s often discovered in its late stages because tumors can grow for years without showing symptoms. and its five-year survival rate has barely budged since the 1970s, unlike that of many other cancers.

But that discouraging picture may not be the reality for much longer. 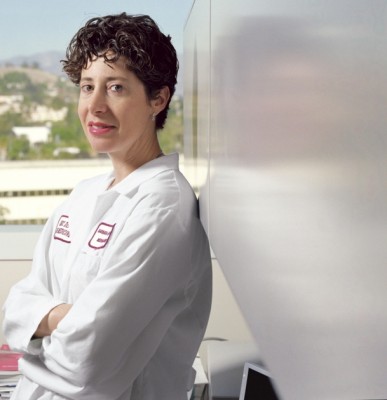 At long last, there are glimmers of hope—thanks to discoveries about the body’s genetic map, a growing slate of targeted drugs, robotic surgery and improved screening. “We’re in some exciting new territory in the treatment of lung cancer,” says medical oncologist Barbara J. Gitlitz, associate professor of medicine at Keck School of Medicine of USC. She’s a member of the Lung Cancer Program at USC Norris Cancer Hospital, part of the Keck Medical Center of USC.

Behind the promising developments is a growing awareness that each person’s lung cancer may be unique. Lung cancer isn’t one disease, experts say. It’s a spectrum of diseases. Each tumor has its own characteristics. If researchers can decode the factors that allow tumors to survive and grow, they can design treatments to work against these factors.

That’s already starting to happen. Work under way at USC Norris to identify targeted therapies is among the first funded by the nonprofit Stand Up To Cancer (SU2C) to show tangible results. 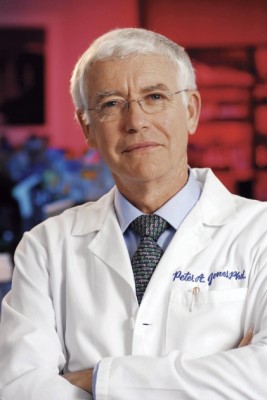 Peter A. Jones, Distinguished Professor of Urology and Biochemistry and Molecular Biology. Photo by Don Milici

Heading up the Epigenetics Dream Team—one of five prestigious teams of researchers funded by SU2C—are Stephen Baylin of Johns Hopkins University and USC’s Peter A. Jones, Distinguished Professor of Urology and Biochemistry and Molecular Biology.

When cancer develops, Jones explains, it causes normal cells to turn off genes that should be on or—equally worrisome—activates others. “Some genes get locked off or silenced when they shouldn’t be,” he says. “With epigenetic therapies, we’re targeting and unlocking these cancer-fighting genes.”

Jones and his colleagues are tackling what’s called the epigenome. If the human genome were the body’s computer hardware, then the epigenome would be the software that instructs the computer when, where and how to work. Unlike our DNA, which can’t be changed, the epigenome is malleable, giving scientists the chance to manipulate its response with drugs.

One of these drugs traces its roots to Jones’ earliest years at USC. In 1980, Jones made a key scientific discovery about the compound, called 5-Azacitidine, which opened the way for the field of epigenetics.

Three decades later, the drug was one of two medications in a promising SU2C clinical trial for patients with advanced non-small cell lung cancer. Results showed lasting responses in patients and indicated that the drug might make tumors more vulnerable to chemotherapy.

Jones works with medical oncologists like Gitlitz, a member of the USC Norris Developmental Therapeutics Program, to ensure that such innovative ideas reach patients.

Clinical trials are under way for all stages of lung cancer.

A nonsmoker, Cheung was diagnosed with lung cancer in 2011 when the spreading cancer broke a bone in her neck. She had surgery at USC to stabilize her neck and remove the cancer, followed by radiation. Fortunately, her tumor carried an EGFR mutation, the target for a therapy called erlotinib. “That kind of good news goes all day long,” says her son, Billy Szeto ’95, who has helped coordinate her care.

Cheung takes one pill daily. “I feel very good,” she says. “I have a lot of energy.”

David was diagnosed with lung cancer in 2011. He had surgery, radiation and chemotherapy. Twice his cancer went into remission. In January, it returned again, this time in his liver. Gitlitz ran genomic tests. David came up positive for what doctors call RET translocation. “I felt like I’d won the lottery,” he says.

RET translocations—the mistaken flipflopping of genetic material—have long been identified with thyroid cancer but also were linked to lung cancer in 2012. Gitlitz found a targeted therapy that had exclusively been used to treat thyroid cancer. “I’ll do anything to bring the most cutting-edge treatment to my patients,” says Gitlitz, a 2004 STOP CANCER grant recipient. The Rays decided to give it a try.

In January, David started taking vandetanib. Working with Gitlitz, the Rays have their eyes on another promising drug in clinical trials. “We’re going forward,” says Arlene. “You have to keep fighting.”

Jones and his Epigenetics Dream Team are moving forward, too. Next up are expanded trials for lung cancer and the search for a molecular fingerprint. “We’re working hard to come up with biomarkers that will help us predict who will benefit from these therapies,” he says.

Even targeted therapies aren’t cures. Eventually, cancer finds a way to grow again. So Gitlitz and fellow oncologists are testing drugs that might break down the mechanisms of drug resistance.

Lung cancer remains the leading cause of cancer death in the U.S. But over the next five years, Gitlitz expects to see the discovery of more gene mutations and the development of more targeted therapies in response. “My hope,” she says, “is that we’ll be able to make lung cancer a chronic disease.”