Tassel Worth The Hassle

Four years ago, Nadia Filanovsky, Lauren Gilmour, Anthony Llamas, Neysa Sanghavi, Meg Schwartz and Leily Zhu spoke excitedly about what they were looking forward to as new Trojans. Now, these members of the Class of 2022 talk about how USC lived up to their expectations. 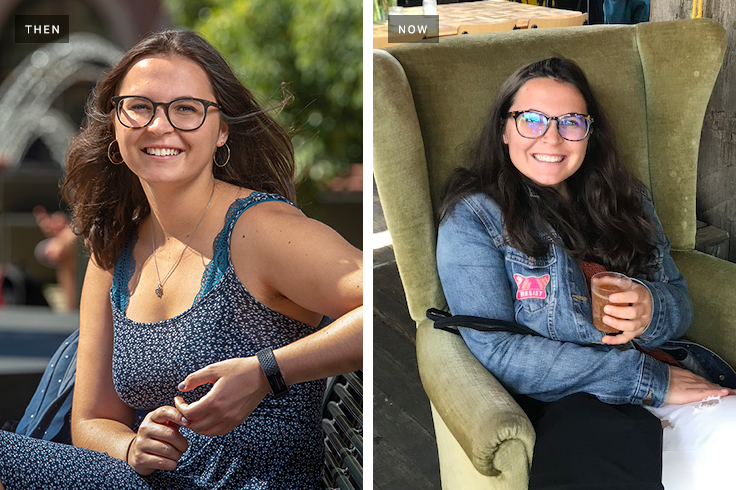 Then and now: (Left to right) Nadia Filanovsky in her first year at USC, and studying abroad in Amsterdam as part of a Problems without Passports trip. (Photos/Gus Ruelas and Courtesy of Nadia Filanovsky)

As a first-year student in 2018, native New Yorker and Trustee Scholar Filanovsky was excited to expand her horizons at USC. The economics major hoped that by graduation, she would “be comfortable in my field of study, a bit more traveled and ready to take on the world.” She did all that during her time at USC; she also improved her fluency in German and Spanish. After earning her bachelor’s degree in May, she will complete her master’s in December and is moving back to New York City to work as a sales, trading and structuring analyst at Deutsche Bank. This loyal New Yorker even got her driver’s license: “My freshman self would be proud of where I am now.”

What I learned at USC: “My time at USC has changed me in that it has helped me to feel more empowered and confident, which has let me believe in myself in a way I didn’t before. A huge highlight for me was the fall semester of my last year, where I got to go back to campus and have an almost normal semester back on campus with a robust response to the pandemic from the university, where I always felt safe.” 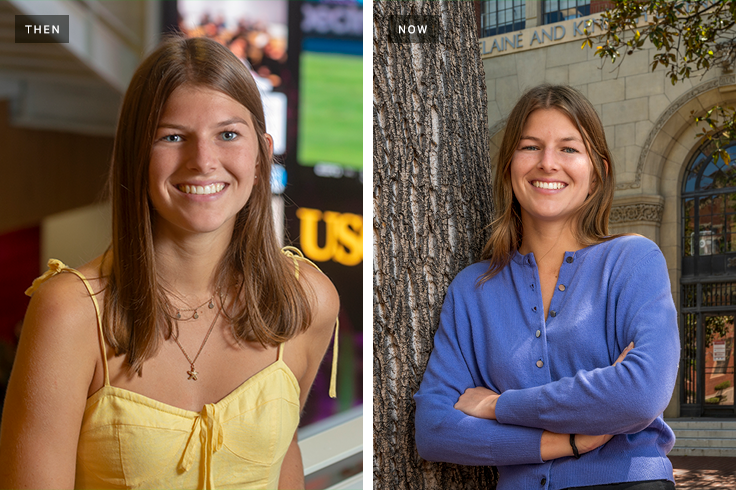 Then and now: (Left to right) Lauren Gilmour poses for a photograph at the USC Annenberg School of Communication and Journalism in 2018; four years later, she poses for a photo in front of Leventhal School of Accounting. (Photos/Gus Ruelas)

As an incoming public relations major, Gilmour set out on her USC journey armed with her grandmother’s Tommy Trojan charm necklace (“also a good luck charm for game days”) and her sister’s advice on creating her community in college.

Four years ago, she was most excited to “experiment with a lot of different kinds of classes and broaden my education. There are a lot of topics that I want to explore outside of my major, public relations, such as computer science, World War II, film, art and graphic design.”

She switched her major to accounting after falling in love with the subject: “It is both a science and an art, requiring creativity and critical thinking,” she says now. This fall, she’s beginning her career as an accounting associate at Frank, Rimerman + Co. in San Francisco.

What I learned at USC: “I came into USC with a solid yet sheltered foundation of knowledge. I believe that I have become more empathetic and open, with a well-rounded perspective of the world.

At USC, I learned about the history of race and class in Los Angeles, the Holocaust, how driving affects the elderly, what kind of fault lines create certain earthquakes and how to create an individual’s tax return. I have a better foundation to digest everything happening in the world today.” 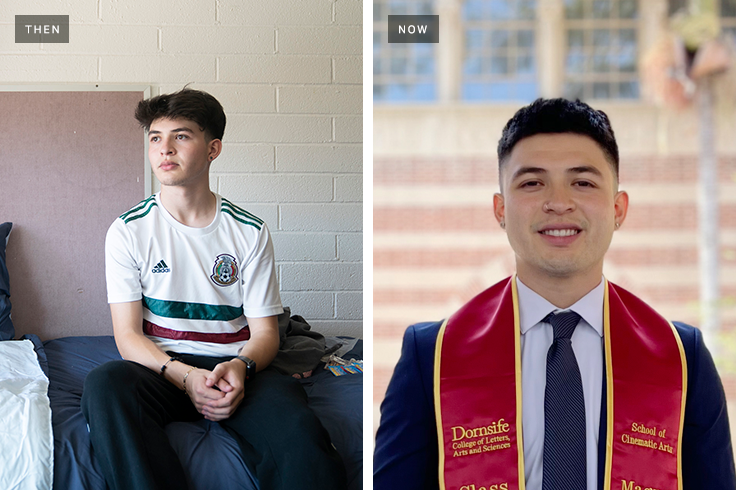 Then and now: (Left to right) Anthony Llamas in his dorm room as a freshman in 2018, and posing for a graduation portrait in 2022. (Photos/Masiah Munson and Ling Luo)

On Move-in Day in fall 2018, then-freshman Llamas shared his journey to USC while his family helped him settle in. The son of Mexican immigrants and a first-generation college student, Llamas attended a prep school in San Jose on a full-tuition scholarship and maintained a 4.1 GPA while working 40 hours a week at a local movie theater before being accepted to USC.

Now a new graduate of the USC Dornsife College of Letters, Arts and Sciences with a degree in psychology, Llamas plans to travel to Mexico and “live a life away from technology and a large city by going to my dad’s hometown” before applying to graduate school.

High points at USC: “One of the major highlights of my USC experience was being able to excel in my academic career as a first-generation, low-income student of color. As difficult as it was, I made sure to always tell myself that I belonged here just as much as anyone else did. Another high point of my USC experience was making a select number of friends. I always felt it was better to have a small group of people that care for you and want you to succeed.” 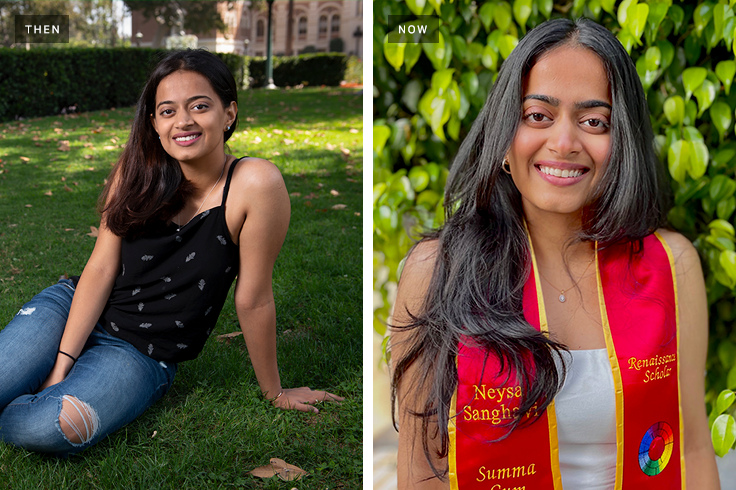 Then and now: (Left to right) Neysa Sanghavi as a first-year student, and posing for a graduation portrait four years later. (Photos/Gus Ruelas and courtesy of Neysa Sanghavi)

When Sanghavi arrived at USC from Mumbai, India, with a Dean’s Leadership Scholarship in 2018, she was already an accomplished humanitarian, conservationist, author and scholar. She had worked on turtle conservation in Costa Rica, researched HIV among former sex workers in India, and was named the first brand ambassador for Rwanda in India for her work with genocide survivors.

She chose USC because of its “excellent pre-med track.” During her time at USC, she was co-director of the Undergraduate Student Government’s Service Student Assembly while earning a bachelor’s in human biology from USC Dornsife and a bachelor’s in pharmacology and drug development from the USC School of Pharmacy. She’ll be attending medical school in the fall.

What I learned at USC: “As compared to my freshman self, I believe I am much bolder and I am not afraid of asking someone for help. I feel more empowered as a person. My volunteer experiences through the Joint Educational Project [one of the oldest and largest service-learning programs in the United States] and the USC Volunteer Center have had a significant impact on how I see myself. My experiences on opposite sides of the world — growing up in India, working in the public health sector in Rwanda, and now working with the unhoused population as a college student in Los Angeles — have prepared me to be the type of physician who will reach out to those unable to seek help.” 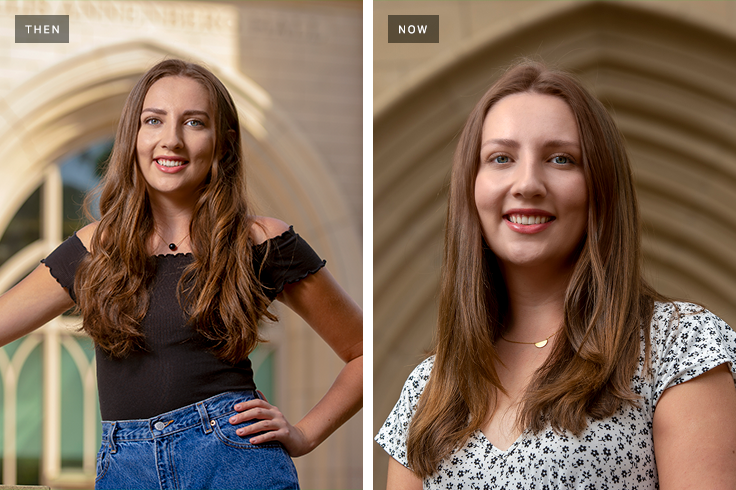 Then and now: (Left to right) Meg Schwartz poses for a photograph in 2018 and again four years later in front of Fertitta Hall. (Photos/Gus Ruelas)

As an incoming freshman, Schwartz said getting into USC — her dream school — was a huge confidence boost. She arrived as a communications major and leader with the gender equality youth initiative Girl Up in 2018 and wanted “to take advantage of every moment living in this ‘happy bubble’ surrounded by opportunities” at USC. After graduating with a degree in business administration this spring, she will embark on a move to the Bay Area to work for Cisco Systems as a project specialist.

High points at USC: “Some of my fondest memories come from living on campus in Birnkrant [Residential College] and [USC] Village, as well as from my campus involvements including joining Alpha Delta Pi sorority, starting a club at USC called Girl Up, working at the USC Annenberg Digital Lounge and being involved in the USC Marshall School of Business. I moved to Los Angeles from the Midwest knowing one or two people, and I have found a community that is supportive, challenging and full of love.” 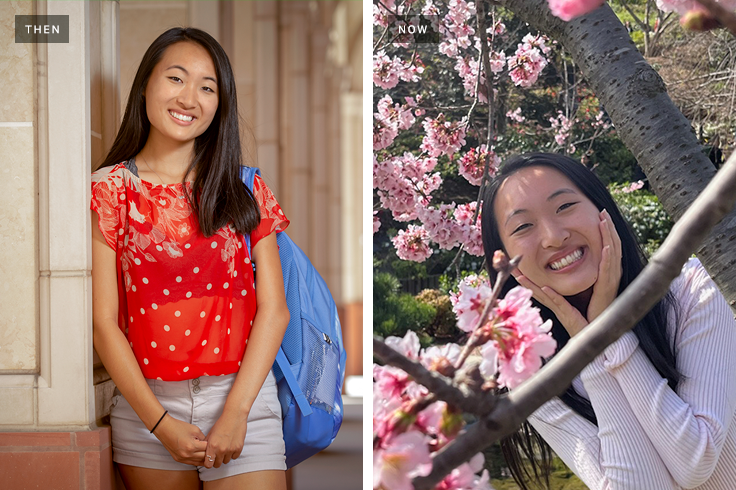 In 2018, incoming freshman Zhu talked about what she hoped to experience as a USC student. The business major from Omaha, Neb., was most excited to study abroad and gain a global perspective. Apart from traveling to China with her Global Leaders Program cohort and to Taiwan for a two-month internship, she counts “watching ICC [International Consulting Club] grow and flourish as president of the club” as a highlight of her time at USC. “I’ve found through the clubs that I have joined on campus that I am willing to put in my 110% to make the organization successful and make sure people are happy and proud to be a part of the club,” she says.

After graduation, she began working full-time as a consultant in KPMG’s Transformation Delivery practice in L.A. “I’ll probably visit USC a lot considering my younger brother will be starting college here next year,” she says.

What I learned at USC: “I still am the same person as I was when I was a freshman but with more experiences, memories and knowledge. I started taking ownership of my involvements and taking on leadership roles in my clubs and projects, which helped me grow and find my passions. While I have a job lined up for me when I graduate, I still have a lot of the same unknowns that I did as a freshman, and I’m still scared of change. But I think my experiences at USC have prepared me well, and I’m confident that I’ll figure it out as I go.”

Interviews have been edited and condensed for length.