AUTUMN ALWAYS BRINGS new spirit to the Trojan faithful. Meet a few especially enthusiastic members of the Trojan Family with a love for all things USC.

Candy Yee ’68, MS ’69 will pull out her camera the second she spots a Trojan athlete. She’s snapped thousands of photos of USC student-athletes—legends or not—many of which she has lovingly shared on her blog, TrojanCandy.com.

Yee and her sister, Patti Poon ’65, have been Trojan fans for more than 50 years. These Houston-bred sisters first came to USC as undergraduates. When they weren’t studying, they went to as many USC games as they could.

Now retired schoolteachers, Yee and Poon still cheer for every USC team, often accompanied by their respective husbands, James Yee PhD ’74 and Dudley Poon. “The only sports we don’t actually go to are men’s and women’s golf, and maybe cross country,” Yee says.

“But we’re into golf!” Poon interjects. “We donate to the women’s team.”

That’s not all they support. Both are on the Galen Founders list, and they give to the Women of Troy, Cardinal & Gold and the Spirit of Troy. Poon is a high-level donor to the Trojan Athletic Fund. Their non-athletic involvement includes USC Associates, Trojan Guild and Town & Gown of USC. Poon also volunteers with the USC Trojan Society of Hospitals. With their husbands, the sisters have endowed two scholarships at the USC Rossier School of Education.

But their most precious gift is time. Before Heritage Hall closed for remodeling, on Thursdays and Fridays the sisters greeted everyone who walked through the door with a welcome table of edible treats. When student-athletes stopped by their table, Yee snapped pictures and interviewed them for her blog. Some, like football player Abe Markowitz ’12, became personal friends. They’re on hugging terms with quarterback Cody Kessler. Adoree’ Jackson and Marqise Lee would always strike a pose when they spied Yee’s camera. And it isn’t just about big names—the sisters cheer athletes from lacrosse to fencing. “As long as they’re Trojans!” Yee says.

With Heritage Hall’s remodel now done, the welcome table is gone, but the sisters keep busy attending USC games and special events, such as sports facility openings and the Trojan Hall of Fame gala. Yee documents it all on her blog. In 2014, the USC Alumni Association presented the sisters with Widney Alumni House Volunteer Awards at the annual Volunteer Recognition Dinner, honoring their support for USC Athletics. 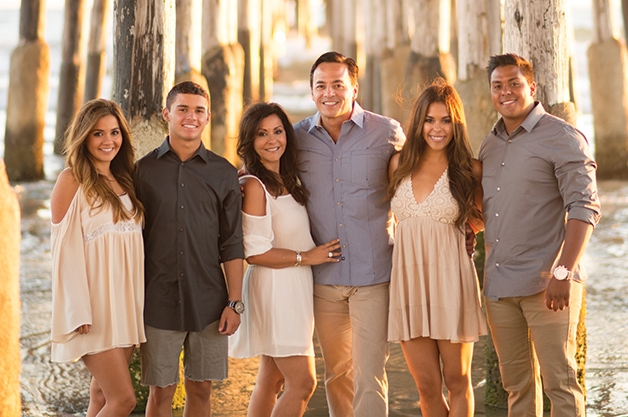 As a USC Song Girl, Jordan Felix leaps and kicks on the sidelines to rally the Coliseum crowd, but she can’t help attracting a small cheering section of her own: her family.

“They’re at every game,” says the junior, a theater major minoring in dance. “My dad has the video camera. My mom brings all her family and friends. My little brother, my older siblings, they’re constantly supporting me.”

The Felixes have made USC a family affair. Michael ’83 and Debbie Felix love rooting for their two Song Girls—daughter Taylor ’13 preceded Jordan on the dance squad—and their enthusiasm has only grown over the years.

Debbie Felix is involved in the USC Kaufman School of Dance, where she serves on the board of advisers. She’s also part of Town & Gown of USC.

Michael Felix, meanwhile, chairs the advisory board of the USC Caruso Catholic Center and sits on the boards of the USC School of Dramatic Arts, USC Latino Alumni Association and USC Associates. For his extraordinary volunteerism, he received the USC Alumni Association’s 2014 Alumni Service Award.

Head of global investment operations for the Los Angeles-based Capital Group Companies, Michael Felix carves out time for what he calls his “three passions”—his wife, their four children and USC. Up to three times a week the Felixes travel to the University Park Campus from their home in Yorba Linda, California. They attend USC Thornton School of Music concerts, Visions and Voices cultural events, plays at the USC School of Dramatic Arts and Sunday evening mass at Our Savior Parish and USC Caruso Catholic Center. Someday, Michael Felix plans to walk down the church’s aisle and give away his daughters as brides. Older son Brenden, a University of Arizona graduate, is eyeing the master’s in real estate development program at the USC Price School of Public Policy. Meanwhile Austin, the youngest child, is applying for college. More USC superfans in the making? “Oh my God, we’re praying so hard,” Debbie Felix says. 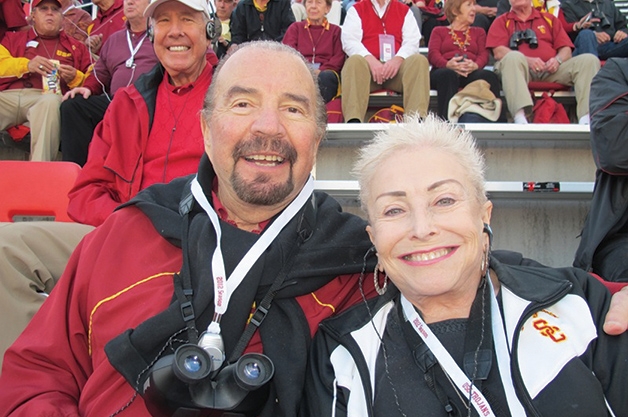 Trojans for more than 50 years, Herb ’58 and Kathy Goodman ’62 never miss a football game. Photo courtesy of the Goodman Family

It’s been a half century since Herb ’58 and Kathy Goodman ’62 graduated from USC, but you’ll still find them at the Coliseum and Galen Center three or four times a week during fall and winter. After 57 years of wedded bliss, they never miss a football game. And they attend every men’s and women’s basketball and volleyball game at the Galen Center. They helped build it, after all. You’ll find their names on the dedication plaque at its northwest corner.

A native Angeleno, Kathy Goodman fell in love with Trojan football as a youngster. “All of the tradition, the band. I only ever wanted to go to ’SC.” She got her wish, attending on a scholarship. Pretty soon she was dating Herb Goodman, a psychology major from New Jersey. They were both musicians: She played double bass, he played several wind instruments. On Saturdays, he wooed her from the field, marching in the Spirit of Troy’s saxophone section.

After college, Herb Goodman became a social worker and Kathy Goodman taught at local schools. Moonlighting as band leaders, they started their own banquet facility, which proved so successful they were able to sell the business and retire a few years later. One thing that hasn’t changed is their enthusiasm for their alma mater. 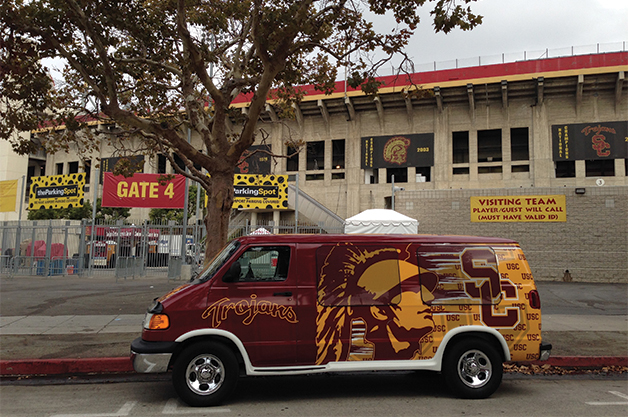 Going to games can take three hours because the Goodmans live in Camarillo, California. But it’s never a dull ride in their custom-painted van, the cardinal and gold exterior “so loud it almost blares,” she says.

For years this big-hearted couple lugged boxes of Trojan gear to sell at away games, coaches’ tours and booster events—all proceeds supporting USC Athletics. These days, they’re board members of the Trojan Club and the President’s Advisory Council and emeritus members of the Athletics Department Board of Counselors. They avidly support Swim With Mike and have endowed two basketball scholarships, one for each point guard. “That’s the shortest player on the team,” chuckles Herb Goodman, “because Kathy is 4-foot-6.”

“USC has given us such pleasure over the years,” he adds. “That’s why we decided to give back our time and our money.”

Do you know a Trojan superfan that should be on this list? If you have questions or comments on this article, write to us.