The True Picture of Health

Having a wider array of people participating in medical research is crucial to advancing care for all patients.

Heart disease is the leading cause of death for American women. You might think, then, that clinical trials focused on the heart would enroll their share of female patients. Yet, in the U.S., women are underrepresented in studies of treatments for heart failure, coronary artery disease and similar problems.

Why does that matter? Women may respond to medications differently than men. The same drug might cause different side effects, stay in the body for longer or work less effectively. Without enough women participating in studies of new ways to prevent, diagnose and treat disease, the medical world could miss important information that might improve and protect women’s lives.

The need for diversity in medical research goes beyond the male-female divide, though. Though ethnicity, age, geography, race and more can influence how well a patient fares with a particular treatment, much of what the medical world knows about drugs and other treatments comes from clinical trials heavy on middle-aged, white male participants.

Researchers acknowledge that diversity in clinical trials matters. Federal regulations have pushed diversification of the nation’s clinical trials since the ’90s, but experts recognize there’s still room for improvement. Even today, relatively few African Americans participate in cancer drug trials, for example, and women remain a minority in studies of HIV/AIDS.

At Keck Medicine of USC, physicians and scientists are doing their part to diversify clinical trials. Including a wide array of people from different backgrounds in medical research, they say, is crucial to advancing knowledge that could benefit everyone.

Heart Health for All

Keck Medicine surgeons have contributed to knowledge about cardiovascular disease and treatment for decades. In 2010, Keck Medicine joined the Cardiothoracic Surgical Trials Network, the National Institutes of Health’s infrastructure of more than 50 medical centers conducting clinical trials in cardiac surgery.

Now, through a major grant from the National Heart, Lung and Blood Institute, surgeons at the USC Cardiovascular Thoracic Institute strive to diversify clinical trials for cardiac surgery.

Heart specialists nationwide recognize the importance of diversity in their studies. Take the example of high blood pressure, or hypertension, among blacks. High blood pressure is linked to stroke and heart problems, and blacks have the highest rates in the U.S. Answers to the best ways to control high blood pressure in blacks — and other groups — can only come to light if large numbers of people of different races and other characteristics volunteer for medical studies.

At Keck Medicine, specialists are doing their part by broadening the base of patients involved in heart surgery studies. These procedures include coronary bypass and heart transplantation, among others.

The researchers’ recent federal grant will help them reach out to a wide variety of patients. Through a partnership with the Los Angeles County Department of Health Services, investigators will recruit potential participants from areas of Los Angeles County with a large Latino presence.

Latinos are traditionally underrepresented in cardiac surgery clinical trials, says principal investigator Michael Bowdish, associate professor of surgery and preventive medicine at the Keck School of Medicine of USC. “By increasing patient diversity in cardiac surgery clinical trials, we are better suited to address cardiovascular disease, the No. 1 cause of mortality in the United States.”

The grant also enables USC Cardiovascular Thoracic Institute surgeons to go beyond L.A. and partner with physicians in other parts of the country with different demographics. The new grant supports an effort by investigators to pool their data on heart surgery with Saint Luke’s Mid America Heart Institute in Kansas City, Missouri, a large center that mostly serves black and white patients. Medical researchers there are tracking outcomes for their patients, and results are shared with surgeons worldwide.

“Addressing the cardiovascular needs of our community is a top priority,” said cardiothoracic surgeon Vaughn A. Starnes, Chair and Distinguished Professor of Surgery and H. Russell Smith Foundation Chair for Stem Cell and Cardiovascular Thoracic Research at the Keck School. “This prestigious award provides us with valuable resources to discover novel and innovative therapies to improve the health of our Los Angeles community and beyond.”

Tracing the Roots of Disease

USC has a long history of analyzing health and disease in different populations. Researchers look for patterns in how diseases develop across groups of many thousands of people. Age, genetics, sex and even where someone resides — as well as lifestyle habits — may all play a part.

One of these research efforts — the Multiethnic Cohort Study — calls USC Norris Comprehensive Cancer Center home. The study probes links between lifestyle and cancer in ethnic groups. With more than 215,000 adult participants in California and Hawaii, it’s one of the three largest ongoing studies of this type in the world.

Keck School of Medicine genetic epidemiologist Chris Haiman co-directs the study. Researchers follow participants over time through questionnaires about their habits and health. Their answers have brought to light invaluable information about differences in cancer risk among people whose ancestry goes back to Africa, Latin America, Hawaii, Japan and Europe, says Haiman, director of the Center for Genetic Epidemiology and holder of the AFLAC Chair in Cancer Research.

Haiman’s research mainly focuses on genetic components of disease. Using the Multiethnic Cohort, he has studied genes associated with aggressive forms of prostate and breast cancer. In his latest project, called the RESPOND study, Haiman studies why men of African ancestry are more likely than other men to develop prostate cancer. Their cancer is also often more aggressive and deadlier.

Genes tell only part of the story of risk, though. Other factors matter, too, like what people eat, how much they exercise and where they live. Los Angeles offers a unique setting to see how these factors all combine to affect health. 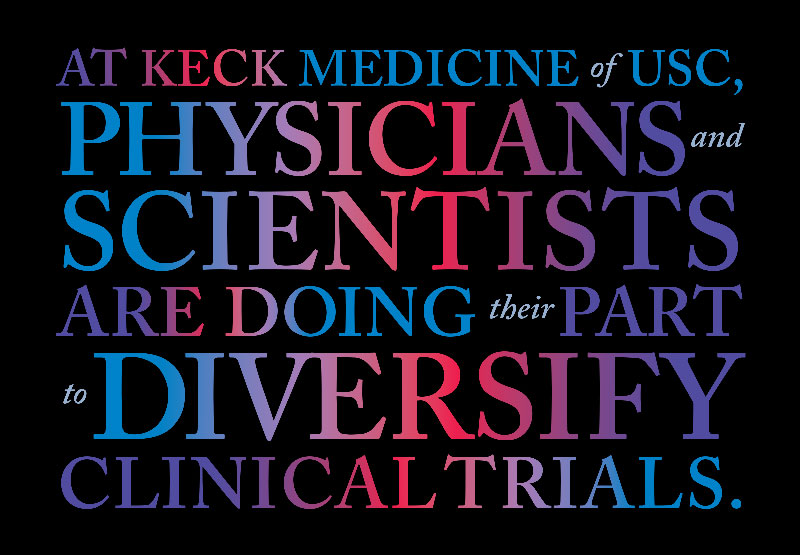 The Future of Diversity in Clinical Trials

At USC, the CaRE² lead investigator is John D. Carpten, professor and chair of translational genomics. He and his colleagues aim to study cancer disparities among blacks and Latinos in more depth than ever before. Findings could turn up clues that may one day improve treatments.

Carpten is passionate about finding answers for cancer patients. But as a longtime researcher of health disparities, he believes that the drive to accelerate therapies can hurt equity. Why? Drug trials are designed to find answers as quickly as possible, he says, and sometimes trying to recruit a broad group of patients could slow a trial down.

Another issue: Clinical trials’ eligibility criteria often exclude potential patients. That is partly so a company can test a drug without too many health complications among trial participants. “In many cases, those criteria might include things like hypertension, heart disease, diabetes or kidney issues,” Carpten says. “And we know that, unfortunately, a lot of these common complex diseases are prevalent among minority communities, which excludes these patients from clinical trials even if they want to participate.”

Cost can also be a burden. USC Norris cancer center, though, recently launched a program that enables cancer patients to seek reimbursement for the expense of participating in a clinical trial. That could even include travel and lodging. The Improving Patient Access to Cancer Clinical Trials program is funded through the Lazarex Cancer Foundation, which was founded by longtime USC supporter Dana Dornsife.

The FDA and pharmaceutical companies are putting forth real efforts to diversify research trials, Carpten says. But the challenges of diversifying recruitment — the structure of trials, patients’ access to care, cultural barriers and more — require creative solutions. “These changes could end up requiring sacrifices to efficiencies, but they will result in a broader and more significant impact in the end.”

Ultimately, medicine will keep more patients healthy when drug testing becomes more diverse. “By 2050, the face of America is going to look different: The populations now called minorities will no longer be minorities. So we need to prepare for that,” Carpten says. “If we learn how to do it now, we will be more prepared to do the work as we move forward in the 21st century. I’m excited about where we’re going, and I think we’ll get there.”

The Cardiovascular Thoracic Institute grant is supported by the National Heart, Lung, and Blood Institute of the National Institutes of Health under award number UM1HL117924.

The RESPOND study is supported by the National Cancer Institute of the National Institutes of Health under award number 5U19CA214253-02.

The Florida-California Cancer Research, Education and Engagement (CaRE² Health Equity Center) is supported by the National Cancer Institute of the National Institutes of Health under award number 1U54CA233396-01. 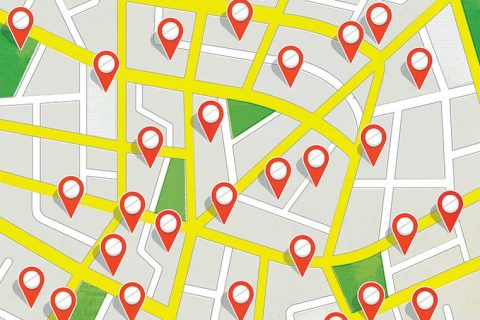 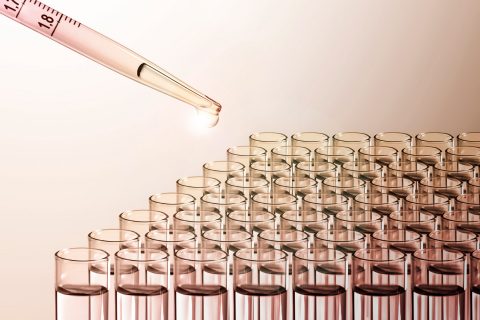 Feeling nervous about joining a clinical trial? Learn more about what to expect. 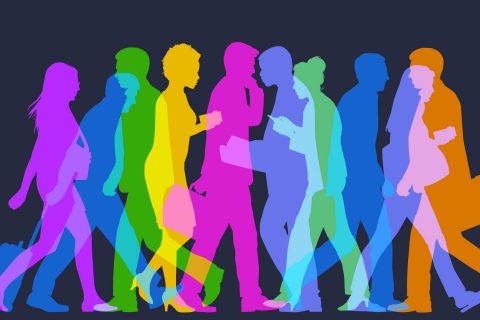