As love stories go, the one between Karen Wong ’82, JD ’86 and Scott Lee ’81 had an unusual start. “Scott was going to have me arrested,” Wong says.

The year was 1978, and the setting was a Halloween party at Lee’s home, where Wong, dressed as Little Bo Peep, was pushed into the pool. She went in search of a place to dry off. It wasn’t long before a startled Lee found a stranger in street clothes toting a bulging bag from his parents’ bedroom. (Turned out, the bag contained her wet costume.)

The following year, they crossed paths again at Asian Pacific Student Outreach (APSO), a student support group where Wong would serve as secretary and Lee as director.

As APSO leaders, they threw themselves into Asian American student advocacy.

They had another unusual run-in when Wong asked Lee if she could go through his garbage for her Anthropology 101 class. Unfazed, Lee declared his neighbors’ trash far more interesting— and offered to help her scrounge through it. Thus commenced a semester of Monday nights when the two catalogued trash over dinner. It wasn’t long before Lee asked Wong out on a proper date.

They soon found they had a lot in common. They shared a passion for USC, and their student schedules were packed with activities, including the Joint Educational Project, Delta Sigma Pi and Accounting Circle.

As APSO leaders, they threw themselves into Asian American student advocacy. “At the time, USC was a very different experience for ethnic minorities,” Wong says. “We noticed there were support services for black and Latino students, but no office dedicated to Asian Pacific American students.”

Wong, together with another APSO leader and dedicated alumni, founded the Asian Pacific American Support Group, a scholarship-based organization. The group was a strategic way to develop economic capital for students as they lobbied the university for a dedicated office for Asian American students. Discussions with the university led to a peaceful sit-in—and, ultimately, a dedicated Asian Pacific American Student Services office.

The group evolved into the Asian Pacific American Alumni Association (APAA), which has since awarded nearly $2 million in scholarships.

As for Wong and Lee, the couple married after graduation (Lee proposed on the morning of the 1989 Rose Bowl game), had two children and maintain close ties to USC.

This year, Wong, a partner at Milbank, Tweed, Hadley & McCloy LLP, served on the executive committee of the Board of Governors for the USC Alumni Association and co-chaired its diversity and inclusion Committee. She was previously APAA president for two terms and helped launched its $2 million fundraising initiative in 2015. She is also a member of the board of USC Associates and the USC Gould School of Law’s Board of Councilors.

Lee, a partner at Famco Investments, is a member of APAA, USC Associates and the Trojan Athletic Fund.

The couple also established three endowed scholarships through APAA and USC Gould. USC brought the happy couple together, and soon Wong and Lee will be celebrating another special anniversary in their rela-tionship—the APAA’s 35th year. 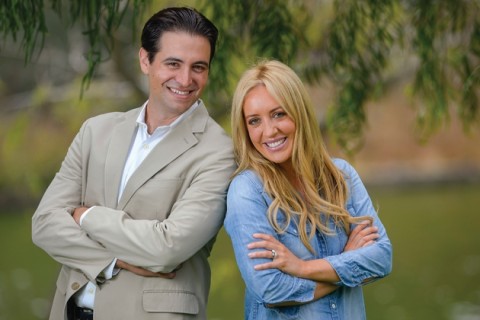 Two alumni translate their marketing smarts into careers in the sports and beauty industries.