When she was 19, Kathleen Rivas woke up one night with an uneasy, numb feeling in her left arm. Her left hand had involuntarily clenched into a white-knuckled fist and she couldn’t control her body, move or talk. After it passed, she felt weak and exhausted.

“I thought I was having a heart attack,” Rivas says. She went to a neurologist who ran tests and prescribed medications, but didn’t come up with any results.

A few years later, she experienced another episode so severe that it landed her in the hospital. “I fell to my knees after I felt a lightning bolt run through my whole body,” she says.

Doctors diagnosed Rivas with epilepsy, a potentially debilitating neurological condition that affects about 2.2 million Americans. Although many associate this condition with convulsive seizures, the bursts of electrical activity in the brain that spur epilepsy can also cause everything from blurred vision to blackouts.

Physicians often can stop a patient’s seizures through drug therapy or by removing the part of the brain where the seizures start. They have few options, though, for patients like Rivas whose seizures begin in critical zones that affect speech or movement.

After visiting USC’s student health center in 2009 while pursuing a master’s degree in journalism at USC Annenberg, Rivas began a four-year treatment odyssey that included medications, complicated procedures and exploratory surgery. None of these measures stopped the seizures entirely.

“It’s like somebody hits the pause button on my body and it shuts down,” Rivas says. “I’m able to talk, but I slur my words and only become comprehensible when the episode starts to wind down.”

So when Keck Medicine of USC neurosurgeon Charles Liu told her she was the perfect candidate for a promising new epilepsy-fighting device, Rivas didn’t think twice—even though it meant it would be implanted in her brain.

Keck Medicine of USC physicians had been testing the implant in clinical trials since 2006. 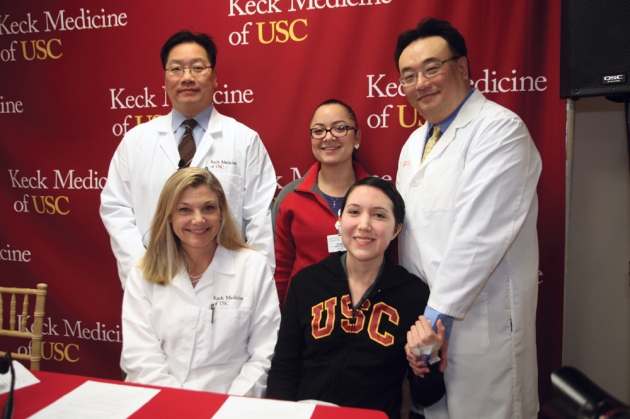 “I didn’t really understand the magnitude of this technology. Once Dr. Liu explained how long they had been working on the device and how it could help people with epilepsy and even other neurological conditions, moving forward was a no-brainer,” Rivas says with a chuckle.

Last December, Rivas became the first person to receive the Neuropace device outside a clinical trial, only a month after the U.S. Food and Drug Administration cleared its use for patients with difficult-to-treat epilepsy. About the size of a credit card, the responsive neurostimulator detects and directly responds to abnormal brain activity to prevent seizures before they occur. A bonus: It’s virtually undetectable.

“Neuropace sits in a plate fastened to the skull, so there’s no movement,” explains Christianne Heck, medical director of the USC Comprehensive Epilepsy Program. “The electrodes that help prevent the seizures stimulate at a very low level. Plus, since there are no pain fibers on the surface of the brain, patients don’t sense any activity or discomfort.”

Now 28, Rivas may be saying good-bye to her seizures. The device is helping her doctors capture information about her episodes when they occur. Over time, physicians calibrate it to detect the “signature” of these seizures, and when it senses that signature, it sends an electrical charge to stop the episode before it starts. So far, so good. Rivas is already experiencing fewer seizures, and physicians expect her seizure activity to continue to diminish over time.

Responsive neurostimulators are just one example of the advances under development at the USC Neurorestoration Center, the brainchild of director Liu and co-director Heck. The physicians are moving treatment beyond traditional surgery, medications or even cell-based therapies such as stem cell transplantation.

Their treatment goals are to improve a patient’s ability to think, move and remember—all while keeping the brain intact. “Traditionally, doctors of the nervous system have been content with whatever function is left after treatment,” Liu says, “but the function of the nervous system, or the loss of function, is what matters to patients.”

“We’re not cutting anything out or ablating tissue. We’re modulating it. That’s the wave of the future,” Liu says. It’s also a cornerstone of the BRAIN Initiative, an effort by President Barack Obama to focus research attention on mapping, decoding and repairing basic brain function.

Enter the concept of “smart” prosthetics—electrical devices that work in concert with the patient’s brain.

Responsive neurostimulators have all of the essential components of these advanced prosthetics: an electrode that records brain activity, an electronic component that transfers those recordings to a central database for processing, and an electrical stimulation that’s applied back to the brain based on this digitized information.

Other neurological devices like the deep brain stimulator, which is used to treat Parkinson’s disease, and the vagus nerve stimulator, used in epilepsy, essentially turn on and o as programmed. But the Neuropace is “smart”—it responds to the patient’s needs even before they’re aware of those needs. Physicians can adjust the device for long-term therapy.

This technology opens the door for the treatment of many types of disorders, from epilepsy to Parkinson’s disease. Even pain management and memory restoration, say the physicians, could eventually be treated using smart devices.

Engineering treatment tools is the last step in a long process. First, researchers have to understand the science of the brain. Thanks to advances in technology, scientists are starting to decode how the brain works, and they’re using that information to create novel therapies.

USC’s strengths in engineering, bioscience and medicine put the university in a special position to make advances against neurologic disease. “Through our work with patients, we have the unique opportunity to record brain waves and map out physical function as part of our routine surgical care,” says Heck. That means that physicians are gathering information from patients during treatment that scientists can use to better understand the brain.

During epilepsy surgery, for example, neurosurgeons remove part of an area of the brain called the hippocampus. The surgical team sends tissue samples to a USC Viterbi School of Engineering lab, keeping the tissue alive in a bath of artificial spinal fluid. At USC Viterbi, faculty neuroscientist Ted Berger and his team of researchers scan the hippocampus for abnormal activity.

The scientists hope to use the tissue to fine-tune how and where to stimulate the hippocampus to control seizures.

Berger and his colleagues also use the tissue to learn about memory—and potentially will develop tools to restore it.

“Short-term memory becomes long-term memory by a transformation of brain signals from one region of the hippocampus to another,” Liu explains. “Dr. Berger and his collaborators have developed a very complex methodology to predict this transformation.” Berger aims to use this mathematical modeling as the launchpad for a prosthetic to restore memory in the brain.

Memory is only one of the targets for implantable smart devices. “We’re investigating how technology like Neuropace can help patients with complications from stroke, spinal cord injury and traumatic brain injury,” explains Heck. In the neurorehabilitation realm, the possibilities with these smart tools are seemingly endless.

Take, for example, how such devices might help patients who have lost the use of their arms or legs. Scientists are laying the groundwork for this technology by studying the “intent to move”—how the brain directs the body to take an action. This is encoded in an area of the brain called the parietal cortex. Caltech neuroscientist Richard Anderson—a USC Neurorestoration Center collaborator—and his research team are decoding signals of intent to operate a smart robotic arm.

Ultimately, if a patient wanted to, say, pick up a spoon, a device implanted on the surface of the brain could detect that intention in the brain’s electrical signals—and then direct an exoskeletal robot surrounding his arm to move the limb and grab the utensil.

From collaborate to innovate

While many of these innovations remain several years away, others are already improving lives.

“I’m excited to witness firsthand the innovations in treatment options for epilepsy patients,” says Rivas, who confesses that she sometimes forgets she’s a patient. “I think of myself as a student, and I’m astounded by the work being done at USC.”

These advances don’t occur in a vacuum. True to its collaborative mindset, the nascent center has already engaged in clinical research partnerships with USC Viterbi, Caltech and Rancho Los Amigos National Rehabilitation Center.

“Los Angeles is the epicenter of imagination and creativity in the world,” Liu says. “We are working with the best minds in science and engineering to transform some of these science-fiction-like applications into reality.”

Heck sees the center as a home for inspiring possibility. “We’re striving to create a real and virtual place where the brightest minds in science can gather and assist each other in different research efforts,” she says. Scientists and engineers are all working toward restoring people’s lives in unimaginable ways, and patients like Rivas are reaping the rewards.

Aided by her responsive neurostimulator, Rivas is finally back in control of her dreams—and her life. “With the help of my amazing parents, I’ve been able to keep learning and working at internships, helping out at my dad’s business and volunteering for charity organizations,” Rivas says. “And making better use of my Disneyland annual pass is always a plus.

“I’m excited to get my life back in order.”