Meet three Trojans who are among the select few to serve with the legendary Blue Angels.

The Blue Angels squadron comprises eight aviators who are each assigned to a plane position that has a specific role. The No. 1 plane is flown by the Blue Angels’ commanding officer, who must have 3,000 tactical flight hours. Jet pilots with a minimum of 1,250 tactical flight hours are eligible for planes 2 through 7. While the first six planes perform, the No. 7 pilot provides the narration during flight demonstrations. In position No. 8 is the events coordinator, a naval flight officer or a weapons systems officer who meets the same tactical flight criteria but does not perform in air shows.
The first time that Paul Alwine ’62 saw the Blue Angels in person, he was in awe. It was 1965, and the Lieutenant Junior Grade Navy officer had just returned from Vietnam. As he watched the elite squadron’s daring maneuvers in the skies above Point Mugu, California, he had one thought: “These guys are unreal.”

The Blue Angels, the Navy’s premier flight demonstration squadron, have thrilled millions of spectators like Alwine since 1946. Through air shows and community outreach, the group showcases the pride and excellence of the United States Navy and Marine Corps. Alwine became a fan, and when the Navy captain retired and became president of the USC Naval ROTC (NROTC) Alumni League, he discovered a connection to the iconic group: Three are Trojans.

Ask Cliff Skelton ’78, Amy Tomlinson ’00 and Nate Scott ’07 what they loved most about being a part of the Blue Angels and it’s not the action-packed maneuvers they mention, but the community impact. Each year, the team performs for 11 million spectators and visits thousands of people in schools, hospitals and retirement facilities. “The Blue Angels provided a platform that allowed us to inspire people to be the best version of themselves,” Tomlinson says. 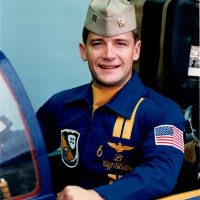 The summer before Cliff Skelton ’78 started his final year in the USC NROTC, he watched a Blue Angels show in Seattle. As the aviators flew in formation over Lake Washington, he thought, “Now that would be an interesting job. Likely will never happen.”

Fast-forward to graduation, when Skelton wasn’t accepted into medical school. While contemplating his future, the USC Dornsife graduate remembered that Blue Angels air show and decided on flight school. “The thought of that manifesting was just a dream,” he says. His dream became reality in 1987. To be eligible for the squadron, aviators must meet certain requirements, including a minimum of 1,250 flight hours. But Skelton emphasizes character as key. “You don’t get picked because you’re the best at what you do; they’ll train you to be the best,” he says. “You’re chosen because you’ll be a good teammate.”

Despite years of aviation experience, Skelton admits that flying with the Blue Angels was not second nature. “I had no idea how to fly upside down at 100 feet or fly 36 inches apart from wingtip to canopy.” At no point, though, do aviators ever get complacent. “As you start gaining more confidence, altitude minimums are reduced,” Skelton says. In the Sneak Pass maneuver, a jet flies at a nail-biting 50 feet from the ground.

Skelton flew with the Blue Angels for three seasons and retired from the Navy after 21 years of service. Today, he is president of output solutions at Fiserv, a publicly traded financial services technology company. 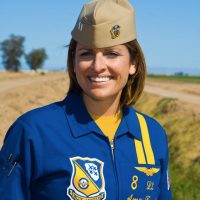 Though the daughter of a Navy fighter pilot, Amy Tomlinson ’00 never considered a military career until she attended USC. It was through relationships with fellow Trojans, including those she met at Alpha Delta Pi, that she learned about USC NROTC. “From the day I walked in the door, NROTC leadership was welcoming and encouraging, leading me to believe I could be successful.” Awarded a three-year scholarship, the USC Annenberg public relations major dove into the program. “It indoctrinated me into service, professionalism and a military way of life.”

Post-graduation, Tomlinson spent two years earning her wings as a naval flight officer. “As a weapons systems officer in fighter aircraft, my specialty was weapons, dropping bombs and shooting missiles, as well as navigation,” she says. The first time she saw the Blue Angels in action, she felt awestruck and envious. She immediately set her sights on applying for the team.

In 2009, Tomlinson became the first woman aviator to join the Blue Angels and wear the signature blue suit. Because no weapons systems are used in air shows, Tomlinson was hired as the events coordinator in plane No. 8. “My public relations degree from USC was critical while serving on this very public team.”

Today, Tomlinson serves in the Navy Reserve and is a city council member in Pacific Grove, California. She’s finishing her MBA at Santa Clara University and is a motivational speaker. On the personal side, “I’m married to a Naval pilot and we’re raising two future Trojans.” 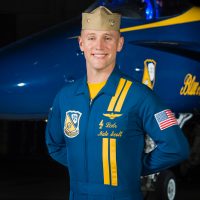 “As a kid, I dreamed of flying fighter planes,” Nate Scott ’07 says. He was 5 when his father, a Navy reserve officer, took him to see the Blue Angels perform in San Francisco. “I was mesmerized,” he says. Afterwards, Scott was photographed with pilot John Foley. That picture stayed on Scott’s wall straight through his USC years. “I attribute my life’s passion to that first air show experience and the memories behind that picture,” he says.

The fourth generation of his family to serve as a naval officer, he credits USC’s NROTC unit with helping him mature: “More than preparing me to be a war fighter, NROTC was an education in what it means to uphold the standard expected of all military officers.”

After graduation from USC Marshall, Scott spent three years in flight training, eventually flying F/A-18 Hornets on and off aircraft carriers for several years before becoming an instructor pilot. In 2017, he was accepted to the Blue Angels. “I got to don the famous blue suit and be a force for good, as we like to say,” Scott says proudly.

During Scott’s two seasons with the Blue Angels he had several full-circle moments, including flying over San Francisco for Fleet Week, in the very show he’d grown up watching. Another occurred at an Idaho airshow, where John Foley dropped by to introduce himself. “We actually met 27 years ago,” Scott told him, showing him his phone where he had a copy of the photo they’d taken together.

The USC Naval ROTC Alumni League started in 1982 with World War II veterans who were Trojan graduates. All Navy and Marine Corps alumni of the USC NROTC (which comprises more than 2,000 officers) are automatically members of the nonprofit group, which is dedicated to strengthening and promoting ties to USC. In addition to mentorship and networking opportunities, the group offers awards and scholarships to USC NROTC midshipmen to support their education. To learn more, visit the USC Naval ROTC website.