“My new scale goes up to 1,000 pounds,” says program director Cheryl Resnik, associate chair of the USC Division of Biokinesiology and Physical Therapy. “We’ve broken two that had a 500-pound weight limit.”

Kids, teens and parents keep tabs on their weight at Fit Families’ free wellness clinic in east Los Angeles, where USC physical therapists and graduate students counsel Angelenos at high risk of Type 2 diabetes and other weight-related problems. Community-level programs like Fit Families are one way health professionals try to tackle obesity where it starts: through habits picked up at home.

More than one in three adults and one in six children in the U.S. are obese, posing a long-term and serious health crisis. Medical problems prompted by excess weight account for as much as $210 billion in health care costs a year, with Californians responsible for perhaps a quarter of that, says Michael Goran, professor of preventive medicine and pediatrics at the Keck School of Medicine of USC, pointing to a study from the Trust for America’s Health. In Los Angeles, one in three children in low-income neighborhoods is now obese, Goran adds.

But that number tells only the financial price of weight gain, not the human toll. Obesity-related health problems like heart disease and stroke, Type 2 diabetes and certain cancers are among the leading causes of preventable death.

USC researchers are studying solutions to the nation’s struggles with weight.

Where dollars and lives are at stake, public policy follows. As economists publish white papers with titles like “The Health Risks of Obesity: Worse Than Smoking, Drinking or Poverty,” local governments attack obesity and try to change behavior through regulation and legislation. Former New York Mayor Michael Bloomberg famously tried to battle his city’s bulge by prohibiting the sale of large sugary drinks—a ban struck down in court in 2013. Last May, a legislative panel in California nixed the latest in a series of attempts to tax sweetened soda and fruit drinks. Policy changes have also hit schools and restaurants. More than two in five of the nation’s school districts pulled junk food from their vending machines in the last few years, according to a government survey, and the federal government now mandates that chain restaurants publish calorie counts on their menus.

But research shows that these steps have limited success, says Darius Lakdawalla, the Quintiles Chair in Pharmaceutical Development and Regulatory Innovation at the USC School of Pharmacy. People often ignore the warnings of a burger’s 33 grams of fat or seek substitutes for banned products. “If you’re unable to buy a Big Gulp of soda, you can still go to the café next door and buy a massive Frappuccino,” he says.

The problem is simple to solve on paper, says Goran, co-director of the USC Diabetes and Obesity Research Institute. Eat less (consume fewer calories) and move around more (burn more calories). “But the fact of the matter is that simple solution doesn’t translate to practice very well,” he says.

No, it doesn’t. It’s a conundrum that crosses scientific and societal bounds. As scientists learn more about obesity’s causes and consequences—why it can be so dangerous and how it affects people differently—they realize it’s so complex that there may never be what Goran calls a one-size-fits-all solution.

“It’s going to be very personalized types of intervention to address individual metabolism, individual behaviors, individual environments, individual contexts,” Goran says. “This will require broader changes in the food environment that would shift the balance from easier access to cheap, low-quality food toward better access to healthier food choices.”

USC researchers and their colleagues across the nation are committed to the fight, even if it has to happen one person at a time.

Shaped by the Environment

The choices many Americans make every day can quietly sabotage their health. Take fountain drinks, for instance. Sugary beverages are the biggest calorie contributor to the American diet, according to the Centers for Disease Control and Prevention, or CDC. Drink more soda, gain more fat—so says the research. On the other side of the equation, fewer than one in 10 Americans get the amount of vegetables and fruit they need for good nutrition. 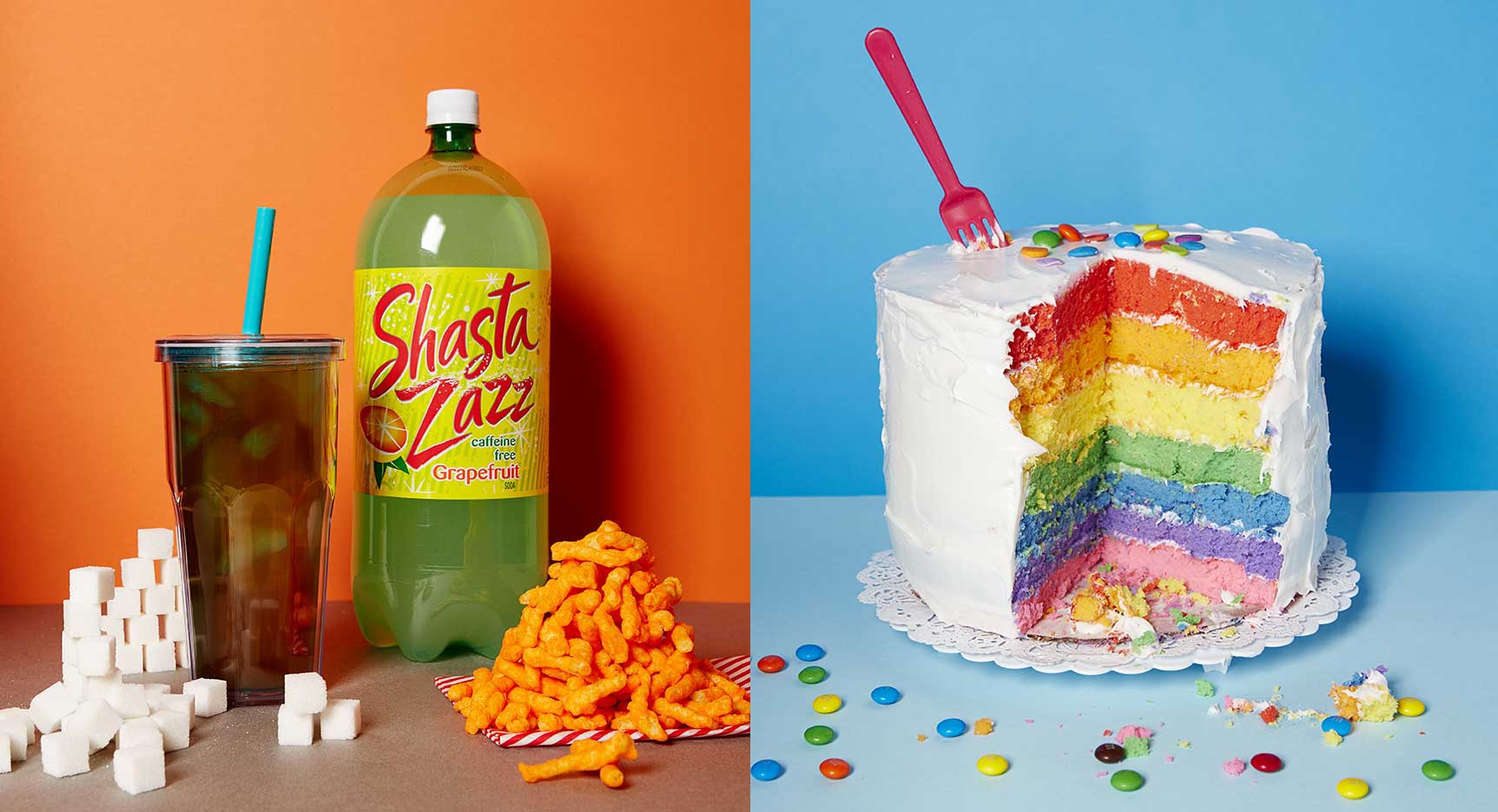 People are increasingly eating on the go, too. Americans consume a third of their calories outside the home—and more than 11 percent of their calories come from fast food, the CDC reports. It’s a matter of convenience for families—but what parents might not know is that fast-food meals are dense with calories, and excess calories add up over time and translate to weight gain.

Environment plays a part in these choices. People who live near supermarkets tend to eat more healthfully, according to research, but minority and low-income neighborhoods have fewer of these markets—especially compared to convenience stories and burger joints—and they may be tough to reach without a car. It’s easy to see why researchers call these areas food deserts.

Some policymakers have tried to limit fast-food restaurants and encourage new grocery stores in these food deserts. LaVonna Blair Lewis, a teaching professor at the USC Price School of Public Policy who studies the phenomenon, was a vocal supporter of a moratorium on new standalone fast-food restaurants in South Los Angeles passed seven years ago.

But do these moratoriums work? The prohibition remains hotly debated, partly because obesity is still rampant in the area. Lewis pleads for patience, noting that it takes time to change a neighborhood’s eating habits. The ban is a victory because it preserves space for healthier food options, she says. “The land available for new development in South Los Angeles is limited, so let’s protect it.”

“The conversation about how we get people good, healthy food has completely changed,” Sloane says.

Then there’s the issue of culture. Immigrants in low-income areas often struggle with weight, the researchers say. Some newcomers are unfamiliar with the array of processed foods that are readily available—and their detrimental health effects. Sometimes their children guzzle sodas and devour burgers in an effort to become more American.

“The research tells us that the longer people stay in this country, the more unhealthy they become,” Lewis says.

Schools may be a key to changing behavior, because education about nutrition and exercise can help kids adopt good habits early, Lewis says. School-provided lunches that are healthful and tasty can help too, especially if children are involved in testing recipes and growing ingredients.

But schools can also sabotage diet, she says: It’s not unheard of for cash-strapped districts to accept vendors’ incentives to keep sugar-sweetened beverages and other unhealthy options on campus—while at the same time cutting physical education classes and extracurricular sports programs to meet tight budgets.

Lewis is among those calling for an examination of procurement policies in public facilities. “Soda companies have a lot more discretionary income than a local farm trying to get vegetables into a school or other public facility,” she says.

Sometimes you not only are what you eat—you are what your friends eat. Research shows that obese people who feel marginalized socialize with other obese people, and that could reinforce unhealthy habits.

At the same time, the social sphere echoes with so-called “fat shaming.” The public’s unforgiving language about obesity is similar to past patterns of denigrating people who fall ill after years of smoking or those with HIV/AIDS, Sloane says.

The talk comes across as “bad people making bad choices,” he adds. In an image-conscious culture, people may believe that the obese deserve what’s coming to them—and this stigma can be tough for the overweight to overcome.

But relationships and the voices of others can also help, rather than hurt. Group programs like Weight Watchers offer affirming support to the obese through caring relationships. Relationships are partly why USC’s Fit Families shows promise: Families gel at the clinic by learning about nutrition and exercising together. “We’ve got one mother-daughter combo that’s actually begun to run races,” says Resnik, the program’s director.

Miles to the north, in the Antelope Valley, other USC researchers are using the power of social support in the home. The Childhood Obesity Prevention at Home program partners with registered nurses who serve at-risk, low-income families. The nurses visit one on one with mothers in the first few years of a child’s life to deliver obesity prevention and health promotion education as part of the services they provide to families.

Program director Sarah-Jeanne Salvy, research associate professor at the USC Mrs. T.H. Chan Division of Occupational Science and Occupational Therapy, says the postpartum period is often pivotal for mothers to implement healthy changes. What frequently drives them to change their lifestyle is the thought of their children struggling similarly with weight as they grow older.

Although the researchers are only a few months into this study, preliminary findings show that the program can impact infants and mothers even after a short implementation, Salvy says. Women are receptive to change “not just for themselves, but also because they’re establishing the health trajectory of their kids for life.”

Call it the french fry effect. Some people just crave foods that they know are stuffed with empty calories or are even harmful. These foods might offer their own emotional, visceral rewards.

Numbers to Shoot For

Physicians use a measure called body mass index, or BMI, as a screening tool. Plugging your height and weight into a BMI calculator can assure you that you’re at a healthy weight — or hint that it’s time to adjust your diet and exercise more. Here is how the numbers play out, according to the Center for Disease Control and Prevention:

“You might choose, reasonably, to weigh more than a doctor says is ideal because you enjoy drinking beer and eating steak,” Lakdawalla says. “From an economics standpoint, those are all contributing to your happiness. It would be paternalistic to say, ‘People should care about maximizing their longevity at all costs,’ even if it means giving up the things they love.”

And that gets to a sticky problem: Where is the line separating obesity as a scientifically predetermined fate versus the result of harmful living? Perhaps some people are preprogrammed to eat unhealthful foods or to build up more fat from these foods.

As Katie Page ’94, MD ’02, an assistant professor in the Keck School of Medicine’s Division of Endocrinology, puts it: “Some people may consume the same amount of calories and exercise as much as the person next to them, but they just may be more prone to keep that energy stored in their body.”

Scientists are trying to figure that out in the lab, and it will take time. But in practice, public health researchers are seeing reason for a little optimism in the national data. While nearly 79 million American adults are considered obese, the obesity rate appears to be plateauing. Perhaps it’s the beginning of a payoff from studies and interventions that cross boundaries.

“It’s a really slow process,” Page says. “It’s not just genetics; it’s not just environment—it’s both. Sorting through all that takes time, and it takes good questions and rigorous research.”