USC’s 2017 commencement speaker, Will Ferrell ’90, has earned accolades— including the prestigious Mark Twain Prize for American Humor—for a career that has spanned television, film, Broadway and the internet. He skyrocketed to fame during a seven-season stint on Saturday Night Live; starred, produced and wrote memorable movies like Elf and Anchorman: The Legend of Ron Burgundy; and co-created the website Funny Or Die.

Perhaps lesser known is Ferrell’s commitment to philanthropy. He is a longtime benefactor of Cancer for College, an organization founded by his USC fraternity brother Craig Pollard ’90 that awards college scholarships to cancer survivors.

During Ferrell’s speech in May—which went viral on social media—the comedian not only kept the audience laughing, but also drew on thoughtful observations from his life as an actor, writer, father and Trojan.

“I would like to say ‘thank you, graduates’ for that warm welcome. I would also like to apologize to all the parents who are sitting there saying, ‘Will Ferrell? Why Will Ferrell? I hate Will Ferrell. I hate him. I hate his movies. He’s gross. Although he’s much better looking in person. Has he lost weight?’”

My fear of failure never approached in magnitude my fear of ‘what if ’: What if I never tried at all?

ON TRYING TO PLEASE EVERYONE:

“After my first show [on Saturday Night Live], one review referred to me as ‘the most annoying newcomer of the new cast.’ Someone showed this to me and I promptly put it on the wall of my office, reminding myself that, to some people, I will be annoying. Some people will not think I’m funny. And that’s OK.”

“No matter how cliché it may sound, you will never truly be successful until you learn to give beyond yourself. Empathy and kindness are the true signs of emotional intelligence. And that’s what Viv [his wife of 16 years] and I try to teach our boys.”

ON LIFE AFTER COLLEGE:

“To those of you graduates sitting out there who have a pretty good idea of what you would like to do with your life, congratulations. For most of you who maybe don’t have it all figured out, that’s OK. That’s the same chair I sat in. Enjoy the process of your search without succumbing to the pressure of results. Trust your gut. Keep throwing darts at the dartboard.” 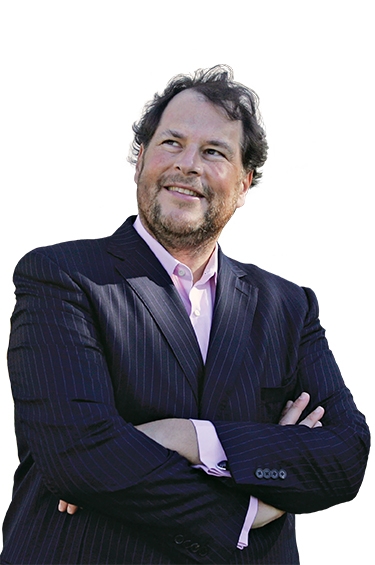 At USC’s commencement for the class of 2014, Marc Benioff shared his life lessons for success and happiness.

Artist noé olivas is the co-founder of the Crenshaw Dairy Mart art collective and gallery. (Photo/Damon Casarez) Got Art?