California native Leon Panetta has held public office by election or appointment since the 1970s, but he is sure that he has never before observed such political polarization between candidates and government leaders in his entire career.

Speaking before a few hundred attendees of the President’s Distinguished Lecture on April 25, the former California congressman and U.S. secretary of defense warned that the friction between presidential candidates represents an unfortunate trend among leadership at all levels of government that derail or stall the nation’s progress in foreign relations, economic development and even research and innovation.

“I honestly believe we are at a crossroads,” said Panetta, who served as chief of staff to President Bill Clinton from 1994-97 after more than 17 years as a California congressman. “We could be an America in renaissance — an America with a strong economy, with strong growth.”

In a democracy, we govern either by leadership or by crises.

“Or,” he warned, “we could be an America in decline — an America that is unable to govern. We are divided by our hates, by our fears and by our prejudices.”

With that, Panetta outlined a series of concerns that he said must be addressed by voters, and by the leaders they elect, to steer the country toward global economic growth, to forge a united effort in the Middle East that will crush ISIS and to increase opportunities for younger generations to succeed so that they can achieve the American dream.

“In a democracy, we govern either by leadership or by crises,” Panetta said. “If leaders are willing to take risks, then we can avoid or certainly contain crises. Unfortunately, we largely govern by crises today.” 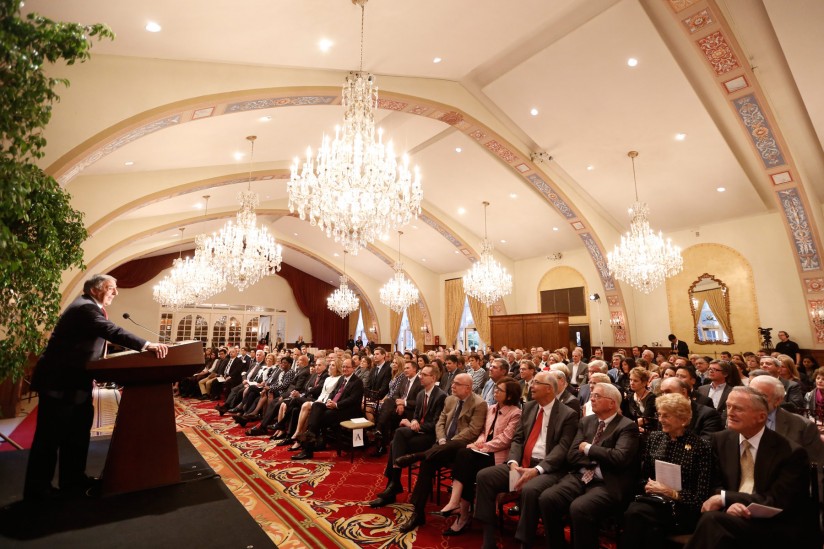 Panetta, who led the Central Intelligence Agency from 2009-11, also advised that the next U.S. president should find a way to contain the following countries that have threatened their neighbors: China, Iran, North Korea and Russia.

At the same time, Panetta said, the next president must reinforce existing alliances, such as with Turkey, and develop new ones to curb and quell terrorism. Whoever it is must also confront increasing threats to cybersecurity systems that guard the modern necessities of global commerce and daily life, including the electrical grid.

“My hope is that the leadership will come forward,” Panetta said. “It may well take a one-term president in order to do what is right for this country. What I want to do is make sure that the same dream is available not only to my children but to my grandchildren. It is going to take tough leadership.”

When Kristen Kavanaugh MSW ’12 started the Military Acceptance Project, she never really gave the idea of working in politics a second thought.

Former US defense secretary shares his expertise at USC

Civilian leaders traveled across the country to participate in the Joint Civilian Orientation Conference organized by the U.S. Department of Defense.