Director Tim Story ’94 self-financed his first two films after graduating from the USC School of Cinematic Arts, making a little money on the first and losing a lot on the second.

To pay off his debts, he focused on directing music videos — drawing on his past experience as a young rapper in Ice T’s crew, Rhyme Syndicate. The work prepared him for film sets because he got accustomed to leading big-scale productions that required specialized equipment and crews made up of dozens, sometimes hundreds, of people.

“You’re not scared of trucks and equipment, and you learn that it all really comes down to the people in front of the camera and what the lens sees. It takes away the fear of being in charge of 200-plus people.”

Story spoke on April 15 as guest of honor at this year’s Jack Oakie and Victoria Horne Oakie Masters of Comedy Lecture Series. In conversation with Professor David Isaacs, a co-founder of USC Comedy, Story talked about his work on three movies that have become successful franchises: Barbershop, Think Like a Man and Ride Along (Story also directed the sequels Think Like a Man Too and Ride Along 2).

Telling the story in his own words

Story, who grew up in Los Angeles, was senior class president at Westchester High School, where his classmates included actresses Nia Long and Regina King, whom Story has known since the second grade and considers among his favorite collaborators. Other collaborators like Ice Cube (Barbershop, Ride Along) and Kevin Hart (Ride Along) have become go-to Hollywood brands, and Story said there’s a reason he first looks to them when developing a project.

If you want to make funny movies, you need to cast funny people. But also understand the straight man.

“I put a high percentage on casting when you’re making comedies,” he said, adding that casting takes up about 75 percent of his focus in early development. “If you want to make funny movies, you need to cast funny people. But also understand the straight man. When you have people that get the timing, it doesn’t make my job easy, but it makes it easier.”

That’s why directors use the same actors over and over again, he said, using his work with Hart as an example.

“I always know he’s going to give me two nuggets that I don’t expect. He makes everything funny.”

Good ideas can come out of nowhere

During the USC discussion, Story also broke down how he designed and filmed key set pieces in Barbershop, Ride Along and Think Like a Man. He pointed out adlibs and told the stories behind some of the movies’ funniest jokes. Often, things that happen on the set or in rehearsals will inform changes; directors have to keep their eyes and ears open for those. Good ideas, he said, can come from anywhere or from anyone, including production assistants who might be on their first professional sets. 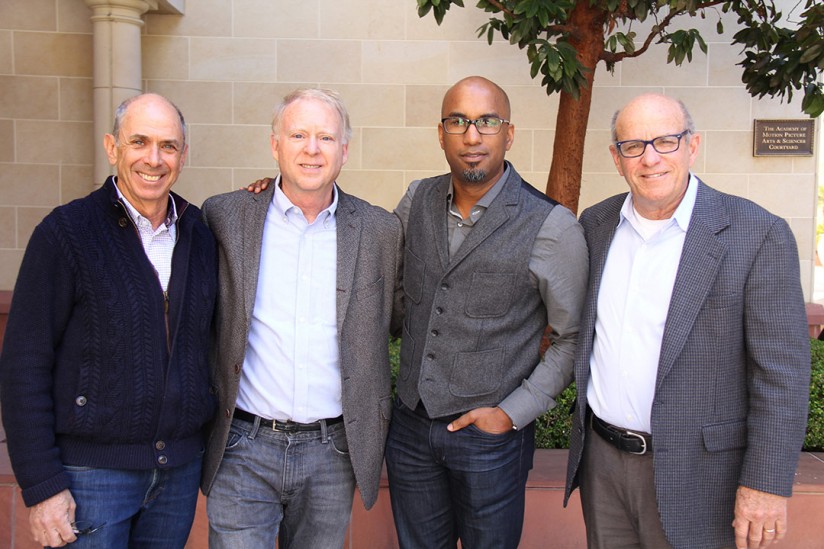 His crew also plays a part in discovering the funny.

“I always make the point to have the crew around when we do the rehearsals because the first time you do the scene they laugh, and if they laugh, you know you’ve got something,” he added.

The Masters of Comedy Lecture is an annual event organized by USC Comedy and the Jack Oakie and Victoria Horne Oakie Foundation, which sponsors scholarships for students interested in pursuing careers in comedic filmmaking.

The Oakies were comic actors in the early years of the studio system. Jack Oakie was also a pioneer, successfully launching a long career as an independent performer after his contract with Paramount ended in the mid-1930s. Among his nearly 90 films was Charlie Chaplin’s The Great Dictator, for which Oakie’s parody of Italian fascist Benito Mussolini earned him an Oscar nomination for best supporting actor.

The Oakie Foundation named a new scholarship in Story’s honor, giving the award a characteristically funny name. The Ride Along With Tim Story Scholarship will benefit a comedy-program directing students at the USC School of Cinematic Arts.

Sixty students cope with chaos on the set and drama behind the scenes during the hectic production of three live TV shows.

A three-day festival held by the USC School of Cinematic Arts on Nov. 18-20 celebrated the launch of the Comedy@SCA Initiative, the school’s new multidisciplinary track.