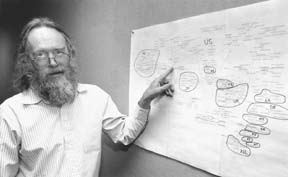 Researcher Jon Postel with a map of worldwide Internet connections in a 1994 Chronicle photo.

Postel, director of the institute’s Computer Networks Division, created the Internet’s address system and for 30 years played a pivotal role in the technical management and administration of the Internet as director of the Assigned Numbers Authority (IANA), a federally financed entity. His wise management of the Internet address system enabled the fast-growing high-speed international communication network to connect computers throughout the world.

He was one of a small group of computer scientists who created the Advanced Research Projects Agency Network (ARPANet), a precursor of the Internet. He worked on the software that connected hosts to the first ARPANet packet switch to route network traffic, and he helped to install that switch in October 1969. Thus he was present at the birth of the Internet.

IANA’s origins can be traced back to ARPANet’s beginnings in 1969, when Postel first began keeping a list of network protocol numbers on a scrap of notebook paper. Then only 25 years old, he was involved with UCLA’s Network Management Center, con ducting performance tests and analysis on ARPANet’s earliest nodes. He helped to develop many Internet protocols, including the Domain Name System, File Transfer, Telnet and the basic Internet Protocol (IP) itself.

Where Wizards Stay Up Late — a book on the origins of the Internet — makes reference to Postel at least 17 times.

“It is not enough to say that Jon will be greatly missed,” said Herbert Schorr, executive director of USC’s Information Sciences Institute. “His presence enriched ISI immeasurably in many ways. In addition to his internationally renowned work with the Internet, Jon played a key role in creating and maintaining ISI’s creative and nurturing environment for research, technical and support staff. He is irreplaceable.”

FOR THE PAST quarter century, Postel has served as editor of the Request for Comments (RFC) series of technical notes, which began with the earliest days of the ARPANet. RFCs often laid the foundation for technical standards governing the Internet’s operation.

“His taste in design was by and large extraordinary,” said Vint Cerf, chairman of the Internet Society, “and yet he did it in a way that you were only barely conscious that he was nudging you toward better design. As the rest of the Internet unfolds, we’re going to discover that Jon isn’t there to remind us what good taste means.”

In July, Postel received the International Telecommunication Union’s prestigious silver medal in recognition of his outstanding contributions to the development of the global information infrastructure through his management of IANA.

In the world of Internet governance, few organizations play as critical a role as IANA. Unique numbers and unique names of the Internet Domain Name System (DNS) must be assigned and managed in an orderly fashion to enable the functioning of the Internet. That has been IANA’s task from the very beginning of the Internet. IANA has been managing the root of the DNS to promote stability and robustness and has ensured that every Internet computer had a unique IP number. To this end, IANA has been allocating blocks of numerical addresses to regional IP registries throughout the world. They, in turn, issue them to Internet service providers and users. IANA also assigns and maintains a registry of the values used for several technical parameters including protocol numbers, port numbers, and others which must also be unique for the Internet to work.

The fact that the ongoing numbering assignment has continued to work effectively despite the phenomenal growth of the Internet is a credit to the architects of the system and to IANA, which administers it.

Postel’s death comes at a critical juncture for the Internet. Postel recently delivered to William Daley, U.S. Secretary of Commerce, a proposal to transfer control of the Internet from U.S. government-funded organizations to an international nonprofit corporation with broad representation from the commercial, consumer and academic sectors.

The School of Engineer-ing’s Information Sciences Institute, based in Marina del Rey, Calif., is a prime contractor in a $21 million project funded by the National Science Foundation to accommodate the Internet’s rapid growth (the system boasts nearly 25 million hosts and is expanding by millions of new users each year). Postel was co-director of the project for ISI.

JONATHAN BRUCE POSTEL was born Aug. 6, 1943, in Altadena, Calif. After attending a community college in Los Angeles, he enrolled at UCLA, where he earned B.S. and M.S. degrees in engineering in 1966 and 1968, respectively, and a Ph.D. in computer science in 1974. It was at UCLA that he was involved in the beginnings of the ARPANet and development of the Network Measurement Center. He began working at USC’s Information Sciences Institute in 1977.