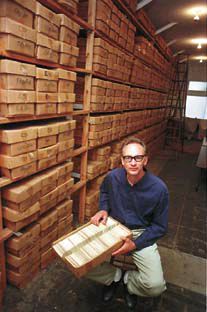 David Bunn, with a box of obsolete cards from the Los Angeles Central Library’s main card catalog, which he obtained in 1990. Bunn uses the cards in his artwork.

David Bunn, an associate professor in the School of Fine Arts, has won a 1997-98 City of Los Angeles Culture Grant.

Bunn, a graduate program adviser and co-chair of photography and experimental genres, will receive a $10,000 Individual Artist Grant. The grant’s objective is to recognize and support Los Angeles visual and photographic artists by providing an opportunity to create and exhibit new works in a community venue designated by the L.A. Cultural Affairs Department.

The 12 recipients of this year’s grants are expected to make their artworks available for public exhibition next spring. The awards are judged solely on artistic merit, based on a review of recent work.

Bunn is a multidisciplinary artist working in various media – most recently, in assemblages of his own poetry inspired by library catalog cards, mounted alongside their “constituent” cards.

“Broadly speaking,” he said, “my work has used various procedures and institutional applications which suggest aspects of exploration and observation and invoke an archival theme.”

In 1990, Bunn acquired the main card catalog from the Los Angeles Central Library. The catalog, which was about to be pulped, had been replaced by an electronic on-line catalog. His first work from the card catalog was a permanent installation in the passenger elevators of the renovated Central Library, “A Place for Everything and Everything in Its Place,” in 1993. He used 9,506 cards for that project, and now uses the remaining millions of cards in his current work.

Bunn says that the catalog represents to him “a complete collection of ‘all the world’s knowledge’… . I take this literally. The card catalog provides the complete terrain for an ongoing work which precedes and enframes all possibilities and encompasses everything.

“The card catalog is obsolete. It is an example of a pre-21st century information technology now superseded. What has become useless for information has now become available as a material for art. This condition of recent obsolescence and the recycling of a cultural discard gives me the opportunity to point directly to this moment of historical shift in the phenomenological experience of knowledge.”

Bunn has now taken to writing poetry from the remains of the catalog. “Here, I am interested in a colliding of various incompatible and often opposed elements or discourses which generate a surplus of new discursive hybrids,” he said. “They are also my poems. My interest here is in the subjective occupation of such an institutional archive while not abandoning the structure of its organizing and collecting principal. The poems I write must succeed as my own map of this territory, made obsolete at this particular historical moment. I too am very much the author of these poems.”

All works taken from the catalog ultimately are returned in the form of books. Bunn publishes each book in an edition of 100 and assigns his own International Standard Book Number. He gives the first in the edition of each book to the Los Angeles Central Library. He has published three such books.

The following example of his poetry is titled “Sometimes a”:

Bunn said his new grant will help facilitate future works, such as book projects developed from the catalog and new exhibition and distribution venues in the Los Angeles area as well as nationally and internationally; joint ventures with other library card catalogs, such as one in progress with the Liverpool Central Library in Liverpool, England; and work yet to evolve from the gift of another discarded card catalog from the defunct Wesleyan Christian Academy in High Point, N.C.

Bunn is preparing for two major international exhibitions. “Deep Storage: Arsenale der Erinnerung” will open July 31 at the Haus der Kunst in Munich, along with the art of Joseph Beuys, Marcel Broodthaers, Sophie Calle and Hanne Darboven, among others. In December, the exhibition will move to Berlin’s Kunstforum in col- laboration with the Neue Nationalgalerie.

In October, Bunn’s solo exhibition, “Library Re: Locations,” will open at the Central Library in Liverpool and the Barbican Arts Center in London. This project was commissioned by the prestigious arts group Book Works in London.

Bunn has been widely recognized for his work, receiving two National Endowment for the Arts fellowships for photography (1988) and new genres (1989). He has been nominated for the Rockefeller Prize in film and video, received two grants from the Polaroid Corp. and an “Open Channels” video grant from Long Beach Museum. He also has received an individual fellowship from the Massachusetts Council for the Arts.

Bunn is represented by the Burnett Miller Gallery in Santa Monica, which featured a solo exhibition last spring. Other recent exhibitions have included “Selections, ’97” at the Drawing Center, New York; “Limited Edition Artist Books Since 1990” at the Brooke Alexander Gallery, New York.; Breda Art Festival, Breda, the Netherlands; “Mapping,” a national traveling exhibition; “The Naming of the Colors” at White Columns, New York; “Knowledge: Aspects of Conceptual Art,” a national traveling exhibition; “Individual Realities” at the Sezon Museum, Tokyo; a one-person show at UC Santa Barbara Art Museum; and an installation in Biennial III at the Newport Harbor Art Museum.

Bunn has also exhibited his work at the Los Angeles County Museum of Art and in solo shows at the Roy Boyd Gallery in Los Angeles and at the Santa Monica Museum of Art. His work has been represented in two major survey exhibitions, “American Photography in the 1980s” at the National Museum of the Smithsonian Institution in Washington, D.C., and at the San Francisco Museum of Modern Art in an exhibition of California photography.

Bunn’s video work has been seen nationally and internationally, including viewings at the World Wide Video Festival at The Hague, Netherlands; at Videonale 3 in Bonn, Germany; The Renaissance Society in Chicago; and the Atlanta Film and Video Festival, where he was an award winner.

Articles about Bunn and his work have appeared in Artforum, Art in America, Art Issues and Arts magazines. His work has been reviewed in The Los Angeles Times and The New York Times.