Swann is a legend in Trojan and NFL football, a highly regarded international media broadcaster, an extraordinarily effective leader and a deeply committed civic figure. The Most Valuable Player of Super Bowl X, Swann is already well known to the Trojan Family, as well as to individuals around the world.

Swann will replace Pat Haden, who in February announced he will retire as athletic director on June 30.

To his new role, Lynn Swann will bring the heart and soul of a Trojan.

“To his new role, Lynn Swann will bring the heart and soul of a Trojan,” said Nikias. “He shares our profound dedication to combining academic excellence with athletic excellence.”

In a letter to the USC community, Nikias said he expects Swann to bring his experience, expertise and sheer love for intercollegiate athletics to important national conversations and reforms, particularly through the university’s leadership in the Pac-12, National Collegiate Athletic Association (NCAA), the College Football Playoff (CFP) association and the Olympic movement.

“I am excited about coming back to USC – its growth and success under President Nikias has been phenomenal and my family and I are looking forward to being a part of that,” said Swann.   “As athletic director, my goals for the student-athletes will be to graduate, to win and to experience.”

Excellence on and off the field

Swann earned his bachelor’s degree in public relations from the USC Annenberg School for Communication and Journalism. While pursuing academics at USC, he excelled on the football field, playing on two Rose Bowl teams and a National Championship team in 1972. He was team captain, most valuable player and an All-American in 1973. 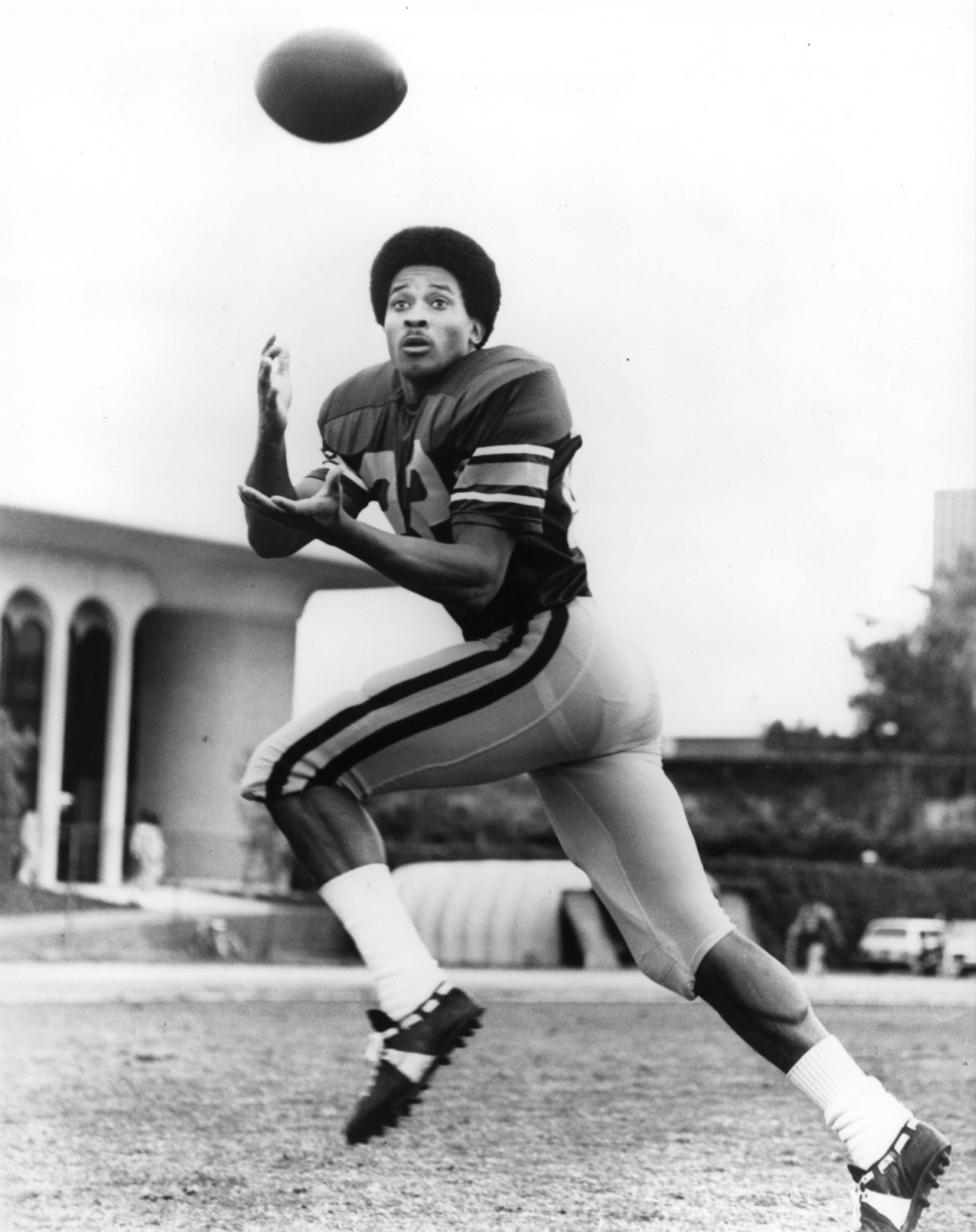 Lynn Swann was USC team captain, MVP and an All-American in 1973. (File photo/Courtesy of USC Athletics)

Swann later returned to USC to take graduate-level courses in broadcast production along with outside instruction in writing, speech and acting, continuing his education and preparing for his future.

“USC opened doors for me,”  Swann said. “I learned about myself, and my education created a pathway to go forward. I was always looking toward preparing for that career beyond football.

“It is foundational for our student-athletes to earn their degree,” he added. “Education is about laying each brick of that foundation, one day at a time.”

His collegiate success led to a storied career in professional football. In 1974, Swann was drafted in the first round by the Pittsburgh Steelers, and quickly became a cornerstone of the Steelers’ dynasty, winning four Super Bowls and playing in three Pro Bowls. In 2001, he was inducted into the Pro Football Hall of Fame.

Swann drew on these successes to distinguish himself as an acclaimed leader in both the civic and corporate spheres. He served as president of the national board of Big Brothers Big Sisters of America, an organization with which he was active for more than 30 years. As president, he managed more than 300 agencies across the United States and helped establish the organization as the premier mentoring group in the nation, drawing on the results of a scientific study.

In 2006, Swann entered the Pennsylvania gubernatorial race — a campaign that drew significant praise for its organization and focus as he attempted to become the first African-American governor in that state’s history. He has further sharpened his governance experience in the boardroom as a director of a range of international companies, with previous service on the boards of The H. J. Heinz Co., Wyndham Hotels and Resorts, and Hershey Entertainment and Resorts. Effective July 1, however, he intends only to serve on the Fluor Corp. board and the board of the non-profit PGA of America, until his term with that organization ends in November.

In addition, Swann established himself as a globally admired media commentator. Since 1976, he has worked for ABC, serving as a host, reporter, and analyst for a wide range of events, including the 1984 Summer Olympics, 1988 Winter Olympics, the International Diving Championships, college and Monday Night Football, the Kentucky Derby, Preakness and Belmont Stakes, the Irish Derby and Wide World of Sports.

Swann, additionally, has emerged as a charismatic motivational speaker, offering an inspiring voice on the importance of assuming responsibility, strong leadership and maximizing opportunities. He speaks to a wide range of audiences across the country. Recognizing Swann’s deftness as a leader, President George W. Bush appointed him as chair of the President’s Council on Physical Fitness and Sports.

This new role as A.D. fits with my life focus of leadership, mentoring young people, helping others, and giving them the tools they need to grow and achieve.

“This new role as A.D. fits with my life focus of leadership, mentoring young people, helping others, and giving them the tools they need to grow and achieve,” said Swann.

In concert with his civic engagement and corporate governance responsibilities, Swann stands as a respected philanthropist, and has raised money to provide scholarships for the Pittsburgh Ballet. His involvement with dance dates back to age 8, when his mother enrolled him in a dance class — a decision that would lay the foundation for the extraordinary coordination, physical precision and keen sense of balance that would become hallmarks of his illustrious career as a wide receiver.

Before coming to USC as a student-athlete, Swann — who was born in the foothills of the Great Smoky Mountains, near Knoxville, Tenn. — moved with his family to California.

“My parents’ move was all about providing a better education for their children,” he said.

Swann attended Junipero Serra High School in San Mateo where he was named an All-American high school football player. During that time, he also excelled in track and field, with notable success in the long jump at the state level.

More than 200 candidates were considered for the position of USC athletic director, and the pool was diverse and highly qualified.

In his letter to the USC community, Nikias thanked Pat Haden for his stellar leadership as athletic director over the last 5 1/2 years. Haden will stay on at the university for one year, guiding the renovations of the Los Angeles Memorial Coliseum.

“The Trojan Family will be forever grateful to Pat for stewarding USC athletics through some of its most challenging times,” said Nikias.

Swann is welcomed back to USC with his wife, Dr. Charena Swann, and their two sons: Braxton, who will attend USC this fall as a freshman, and Shafer, a student at the U.S. Military Academy at West Point.

The Trojan legend will stay on to guide the renovation of the Los Angeles Memorial Coliseum.

The All-American wraps up her four-year Trojan career with her sport’s highest honor.