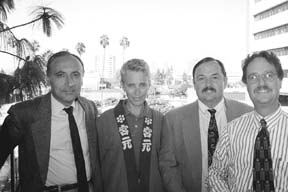 “Graduate students will get a broader education, and Southern California will be their laboratory,” said Joseph Devinny, associate dean for academic affairs at the School of Engineering and co-director of the urban sustainability project.

The term “urban sustainability” describes what urban communities do to manage resources wisely, said Jennifer Wolch, project co-director and professor of geography and policy, planning and development. It describes not just conservation and recycling, but also efforts to minimize the ecological “footprint” of an urban region through changes in production, consumption and transportation patterns. The term also connotes attention to economic efficiency and social equity.

“The Los Angeles region is an ideal place to study issues of urban sustainability,” Wolch said. “We have earthquakes, floods, droughts, fires, air pollution, transportation dilemmas, great income disparities, hundreds of political jurisdictions, the nation’s most diverse population and a pattern of rapid growth that will continue well into the next century.”

USC’s grant is one of 17 awarded by NSF that is intended to produce a diverse group of engineers and scientists who are well-prepared for a broad spectrum of emerging career opportunities in industry, government and academe.

“A new pedagogical approach is needed to meet the needs of tomorrow’s Ph.D.s,” said NSF acting Deputy Director Joseph Bordogna. “As well as being astute in a discipline, they must be prepared to address intellectual issues that transcend disciplinary boundaries.”

“To be a more active part of the work force, Ph.D.s need to be broad as well as deep,” he said. “Strictly disciplinary scientists can only pick away at bits and pieces of society’s complex problems. To solve them, you have to assemble teams of scientists.”

Sullivan said the successful pursuit of the grant was itself a remarkable multidisciplinary effort by faculty from a cross section of USC. Of the 622 pre-proposals written by institutions granting Ph.D.s, 63 groups were asked to submit full proposals and only 17 were funded, he noted.

“We are obviously in an elite group,” he said.

The USC proposal was developed by Sheldon Kamieniecki, professor and chair of political science and director of the environmental studies program; Theodore Tsotsis, professor of chemical engineering; Devinny; and Wolch, with a dozen co-principal investigators (see box at right) who will be involved in the program, contributing key ideas and sections.

The funding from the NSF’s Integrated Graduate Education and Research Training (IGERT) program will support about 15 graduate students a year, covering tuition, a $15,000 stipend and $2,300 for research expenses. A strong effort will be made to recruit a diverse group of recipients, Wolch said.

The program will not only provide undergraduates with research opportunities, but will also involve local high school scholars in the Neighborhood Academic Initiative.

THE GRANT PROVIDES for three new courses with some additional funding support from the James Zumberge Research and Innovation Fund. Two of the courses, Environmental Technologies, and the Urban Environment: Research and Policy Issues, will initially be offered in spring 1999, while Negotiating Boundaries in Environmental Research will start next fall, Devinny said.