Sheila Cooper had only worked three months in the past three years when the five digits of her ZIP code unexpectedly became her lucky numbers.

Those living within five miles of USC were moved to the front of the line as part of the local hiring initiative at the USC Village construction project. That meant Cooper, a pipe fitter who lives four miles away, would be getting some much-needed work. 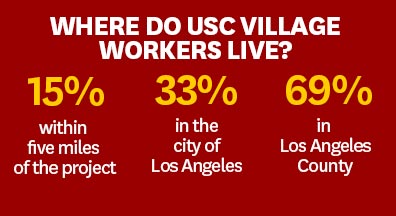 “We went through a rough time,” Cooper said. “But I see things turning around.”

Cooper is just one of the hundreds of local residents who have gotten a job on one of the largest construction projects in the history of South Los Angeles.

“USC Village is putting many people on the path to lifelong careers,” said Thomas S. Sayles, senior vice president of University Relations. “This is a path to the middle class. And this is an impact on multiple generations.”

Men and women from all over Los Angeles are building USC Village, the most ambitious construction effort in university history.

So far more than 3,200 people have worked more than 1 million combined hours on the $700 million privately funded development.

And we’re only at the halfway point in the creation of the massive 1.2 million-square-foot, mixed-use development that sits on 15 acres just north of campus on Jefferson Boulevard.

To date, construction workers have:

Cooper first heard of the possibility of working in her neighborhood through a job fair hosted by USC — just part of the university’s outreach to local residents since the project’s approval four years ago.

To learn more about jobs at USC Village, attend an information session. The next one:

Another outreach partner, the South LA Worksource Center, conducts orientations on the first and third Thursday of every month for locals.

The federally funded organization does more than recruit — it helps workers navigate hurdles to employment, such as the $100 steel-toed boots, funds to get OSHA training, Hazmat certification or the other requirements needed to be on a construction site.

“The goal is to equip people with the skills for a lifetime,” said Henryetta Andrade, director of South LA Worksource.

When USC Village opens in fall 2017 with a Target, a Trader Joe’s and 2,700 student beds, it is sure to be the center of life at USC and of the University Park neighborhood.

For Dianne Bryant, who lives in the Crenshaw District, the shorter commute to USC was also something to get excited about. Last year she moved near San Bernardino to work on the $300 million I-15 interchange project. 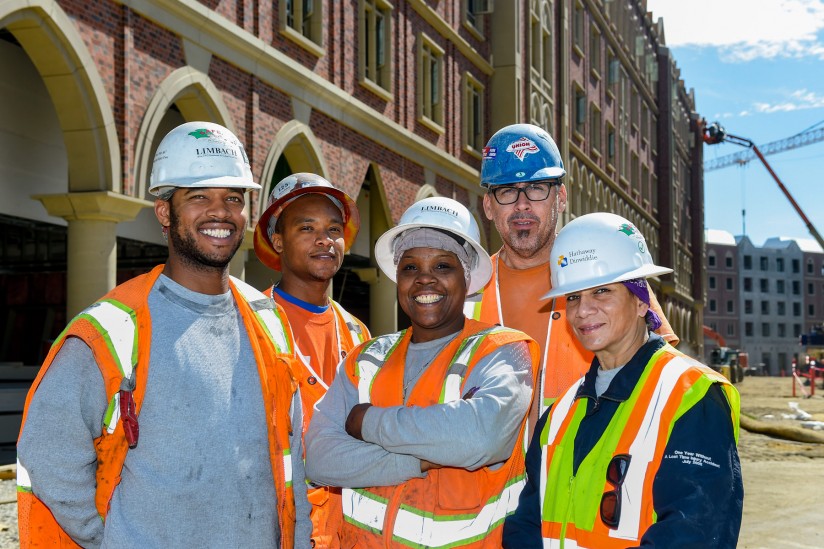 “USC Village is the closest long-term job I’ve had in my 12 years,” said Bryant, who followed a long line of women in her family to work in construction. “This is so rare, long-term and local. It’s a blessing.”

Bryant is a heavy equipment operator at USC Village who not too long ago helped build the Expo Line light rail.

The importance of working on such monumental projects that change the skyline of a city or the character of neighborhood is not lost on those responsible for building Los Angeles.

“Sometimes I drive around and show my daughter the projects I’ve worked on,” said Robert Gandara of Eagle Rock, who puts up drywall and metal framing at USC Village. “I tell her, ‘Daddy built that.’ When I got in the trade, I couldn’t read a tape measure. I tell her, ‘See, with hard work, you can accomplish great things.’ ”

USC Village tops off with placing of landmark spire

It marks the halfway point in construction of the $700 million residential-retail project, on track to open in fall 2017.

The $700 million residential-retail development is on track to open in 2017.

Meet the USC alum keeping the $700 million residential-retail project on time and on budget.

The residential-retail complex will change how Trojans live and learn when it opens in 2017.