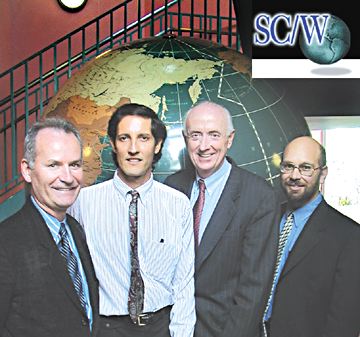 In recognition of Southern California’s growing international ties, USC has launched a sixth-month exposition that explores “the global in the local and the local in the global.”

Through June 30, Southern California in the World and the World in Southern California (SC/W) showcases 24 USC projects with international themes, including theatrical and cinematic presentations, panel discussions, new research, Web sites and photographic, artistic or multimedia displays across a broad array of disciplines.

“As we approach the new millennium in Southern California, the whole world seems to be represented here,” said Eric Heikkila, an associate professor of policy, planning and development and the director of SC/W.

“At the same time, what is happening in Southern California in the arts, sciences, technology and literature is shaping developments in the world at large. We hope our exposition will stimulate and strengthen these connections, which are the future of the region,” he said.

The projects range from the “very academic to the very artistic,” said Rafael Pizarro, SC/W assistant director and a Ph.D. candidate in USC’s School of Policy, Planning, and Development. “We wanted to involve all kinds of scientists, social scientists, social thinkers, artists, philosophers and people in technology,” he said.

• “A Kaleidoscope of Cultures,” a festival of student ethnographic films featuring a range of immigrant groups living in Southern California.

• “Retinoblastoma Inter national,” a Web site to teach doctors worldwide to identify a rare form of pediatric eye cancer that claims most of its victims in the developing and underdeveloped world.

• “Making the Most of SC’s Global Engagement,” two forums this summer that will gather foreign policy experts to discuss ways to maximize links between Southern California and the world.

• “L.A. Inside/Out,” the debut of a one-act play that explores multiculturalism in Los Angeles.

SOME EVENTS HAVE already been scheduled (see below), and regular updates will be posted at the exposition’s official Web site (www.usc.edu/ sppd/scw/). Additional information is also available by e-mail at scw@usc.edu or from Heikkila at (213) 821-1037.

The exposition includes the launching this month of SC/W’s “Digital Globe,” a virtual globe that allows users to explore USC’s links to any place in the world.

Users who point to Jakarta, for instance, will learn that USC Policy, Planning, and Development researchers have looked at the effect of the region’s economic crisis on urban development as well as the potential benefits of governmental decentralization. With the Marshall School of Business, the School of Policy, Planning, and Development is also conducting a training program in decentralization for government officials. Numerous USC graduate students hail from Jakarta, and the Marshall School of Business sends its entire MBA class there each spring.

The USC community is invited to register similar linkages, making the electronic globe a dynamic repository. An additional feature will allow users to identify Southern California sites of particular importance to the region’s large and diverse immigrant population.

SC/W is preparing a book for publication that will focus on insights from the exposition.

FUNDED BY THE PROVOST, the university-wide project was recommended by the university’s International Affairs Committee. The event’s steering committee put out an open call for submissions, which required the approval of a dean and then underwent peer review. Exhibitors represent 16 academic units.

• “The ‘idea’ of Southern California in the world,” which explores how the region’s way of life – as reflected through arts, entertainment, politics, legal institutions, technology, cultural trends and media – shapes the lifestyles of those in other parts of the world.

• “Southern California as a microcosm of the world,” which explores how the region, as a prime destination for immigrants, absorbs and transforms foreign cultures.

• “Southern California as a nexus to the world,” which explores the region’s role as a hub within a global network of linked activities.

SC/W underscores the many international links at USC, which ranks third in international enrollments this year among U.S. institutions of higher learning . USC’s Strategic Plan identifies “internationalism” as one of the university’s four areas of specialization.

“We are leaders in research and teaching activities that connect resources in Southern California with resources around the world, particularly along the Pacific Rim,” said Richard L. Drobnick, vice provost for international affairs. “So it makes sense for us to host an exposition like this.”

• “Art in Motion,” a one-day festival of artists working in noncommercial film – including animation – and new media. On view Jan. 28, at USC’s Helen Lindhurst Gallery and Annenberg Auditorium.

• “Boyle Heights: Neighborhood Sites and Insights,” a photo collection project for a future museum exhibition that will explore the transformation of the heterogeneous neighborhood over time by immigrants from around the world. April 29-30 at the International Institute of Los Angeles.

• “Pacific Rim Doctoral Students’ Conference,” a student discussion of the interaction between the private and public sectors in the fields of policy, planning and development in the Pacific Rim. March 3-5 in USC’s Ralph and Goldy Lewis Hall.

• “Mediated Asias: In the Flesh,” a series of original dance and performance pieces. Curators are John O’Brien, a USC adjunct professor of fine arts, and Meiling Cheng, a USC assistant professor of theater. At 8:30 p.m. March 3, 4, 17, 18, 24 and 25 at Highways performance space in Santa Monica.

• “Cold War/Hot Climate,” a photo exhibit of propaganda from the former Soviet Union. On view March 25 to April 25 at the University Religious Center.

• “Southern California Everyday Life as a Microcosm of the World,” a photo exhibit that explores everyday manifestations of the region’s international ties. On view through Jan. 28 in the gallery in USC’s Ralph and Goldy Lewis Hall.

• “It Takes a (Global) Village,” a photo exhibit exploring the range of child-care traditions brought to Southern California by immigrant communities. Viewings are Jan. 17-31 at Children’s Hospital and April 1-27 at Los Angeles City Council chambers.

• “Art for a Sustainable Future,” a contest among local high school students for posters that illustrate ideas for ensuring healthy, environmentally clean neighborhoods for today’s children and their children. March 1 to June 6 at the California Science Center in Exposition Park.

Exposition Explores the ‘Global in the Local’