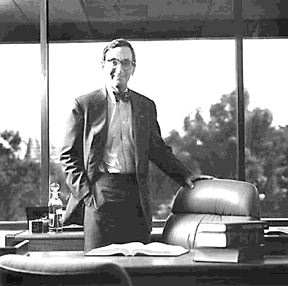 Law School Dean Scott Bice returns to teaching at the end of June. Bice believes institutions benefit from changes in leadership: “You hope that all the good things that have been accomplished continue, but fresh eyes are going to see new opportunities and see new directions that could be undertaken.”

SCOTT BICE, the USC Law School graduate who went on to become one of the school’s most popular and longest-serving deans, has announced that he will return to teaching effective June 30.

A search committee co-chaired by USC Marshall School of Business Dean Randolph Westerfield and Provost Lloyd Armstrong Jr. has been formed to find his replacement. The committee is expected to make its recommendations within the next several months, with the new dean in place by the 2000-2001 academic year.

Bice, who has the third-longest tenure of a currently seated dean at an American Bar Association-accredited law school, has led the USC institution since 1980. According to the ABA, the average length of service for an American law school dean is less than five years.

BICE’S TENURE has been marked by a dramatic improvement in the school’s quality, a near doubling of the size of its facility and three successful fundraising campaigns.

The current $50 million campaign is expected to conclude this fall, making it the most successful fundraising effort in the school’s history. The law school calculates that it ranks seventh in the nation in endowment per student. During Bice’s tenure, the number of endowed faculty positions – a key indicator of the school’s ability to compete for top faculty – grew from four to 29.

During his tenure, the school expanded its reputation for interdisciplinary legal scholarship and has built strong programs in law and economics and law and humanities and clinical education.

“Scott is the consummate teacher, scholar and administrator,” said President Steven B. Sample. “On all levels, he has brought the law school to national prominence through his visionary and inspiring leadership. His leadership will be missed.”

In the sharp-elbowed world of legal academics, Bice is known for his conflict-deflating management style, which had become one of the school’s most effective tools for recruiting new faculty.

“In other schools, there’s so much politics and dissension that a lot of time is spent challenging the administration,” said Larry Simon, a Law School veteran and holder of the H.W. Armstrong Professorship in Constitutional Law. “We have none of that here, and we attribute that to him.”

Added George Lefcoe, another Law School veteran and the holder of the Florine and Ervin Yoder Professorship of Real Estate Law: “Our law school is as well managed a law school as exists in this country, and we owe a good deal of that to Scott. Lawyers aren’t trained in management skills, so if a lawyer turns out to be a great manager it’s complete luck or innate skill.”

Faculty twice talked Bice out of leaving the deanship – once at the end of his first 10 years in office and then again in 1995, after he finished serving a third five-year term.

“It’s nice when your colleagues appreciate what you’re doing,” Bice said. “I’ve found the dean’s job rewarding and stimulating, and obviously I liked it, because I stayed a long time. But I think in stitutions benefit from having a change in leadership from time to time. You hope that all the good things that have been accomplished continue, but fresh eyes are going to see new opportunities and see new directions that could be under taken.”

BICE EARNED HIS B.A. and J.D. at USC, where both his parents – Virginia S. and Fred H. Bice – attended college also. In fact, a law professorship was established in their names in 1989.

“People who move around to several different institutions of course make significant contributions, but being at USC my entire adult life has given me a special sense of dedication to and identification with this institution,” Bice said. “I’ve invested heavily in the progress of the law school and university with a deep sense of attachment and continuity.”

A constitutional scholar who clerked for Chief Justice Earl Warren of the U.S. Supreme Court in 1968-69, Bice has taught one course a year, in torts, as dean, a practice that he will continue, he said. He’s still evaluating what other courses he will teach – possibly constitutional law or professional responsibility.

“I took a sabbatical several years ago and sat in on several courses at the law school, and one of them was Scott’s torts course,” said Mark Weinstein, an associate professor of business at the Marshall School. “He was the single best classroom teacher I’ve ever seen. He has a remarkable gift.”

AFTER LEAVING THE deanship, Bice will take a one-year sabbatical. In addition to returning to research activities, he and his wife, Barbara, plan to spend more time on their powerboat, cruising south to Mexico in the winter.

Among currently seated deans at ABA-approved law schools, only N. William Hines, the dean of the University of Iowa College of Law, and Leigh H. Taylor at Southwestern University School of Law have served longer than Bice, according to the ABA. In the 100-year history of the USC Law School, only Frank Monroe Porter, who led the institution from 1904 until 1926, has served longer as dean than Bice.

Among currently seated USC deans, Bice is the longest serving.

Dean Bice Will Return to Teaching