The crowd applauds during Wednesday’s interfaith service in memory of Steven B. Sample. (USC Photo/David Sprague)

Wendy Pedersen, who worked with Steven B. Sample on the staff assembly, wipes away a tear during the interfaith prayer service. (USC Photo/David Sprague) 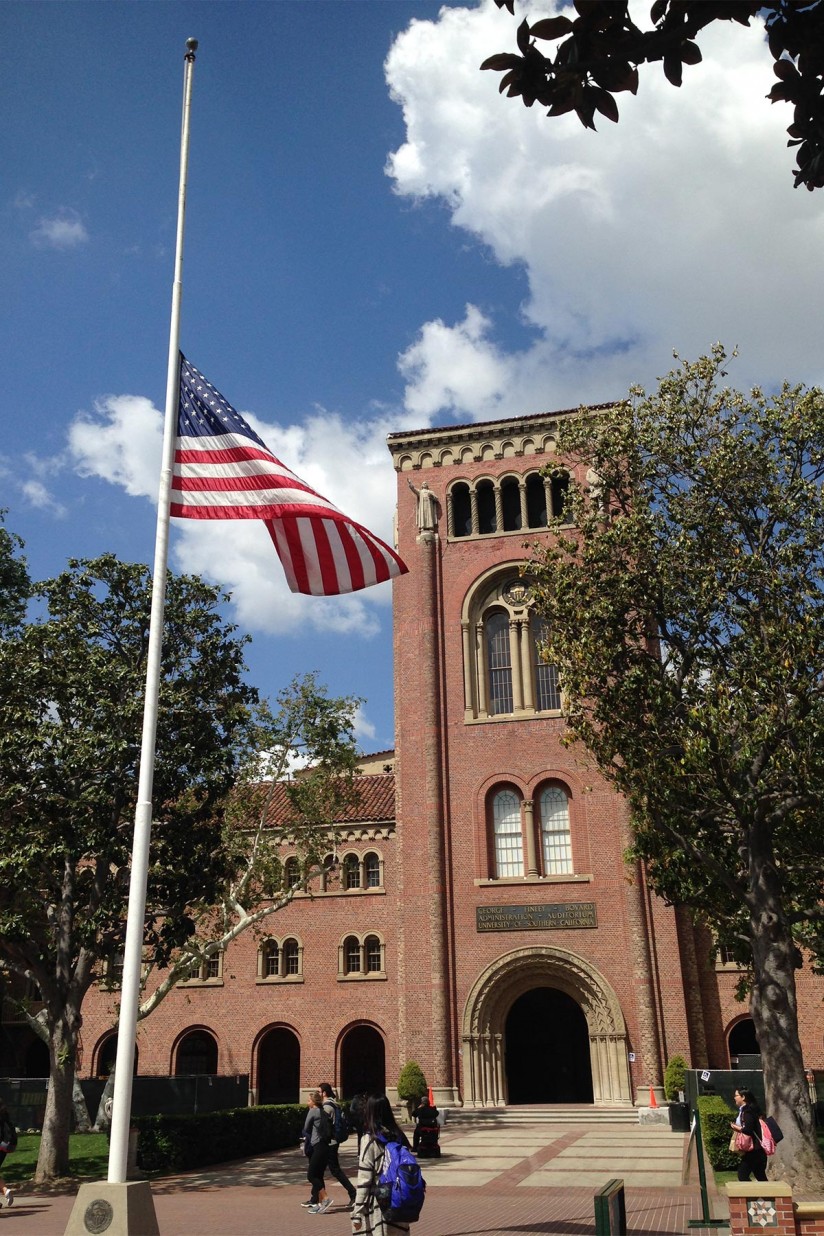 The flag flies at half staff outside Bovard Administration Building on Wednesday, one day after the death of USC President Emeritus Steven B. Sample. (USC Photo/David Medzerian)

Sample led USC from 1991 to 2010, a period in which the university quickly rose into the ranks of the nation’s elite, launched unprecedented community service programs and increased diversity among the faculty and staff.

“Under his historic leadership, our Trojan Family soared to new heights,” Dean of Religious Life Varun Soni said before a moment of silence during a noontime interfaith prayer service.

“Steven B. Sample has left a lasting legacy,” USC President C. L. Max Nikias said. “He touched and changed all our lives for the better.”

Nikias said that Sample liked to be called “Professor Sample” as it served as a reminder of his – and the university’s – role, and noted that Sample and his wife, Kathryn, quickly began a deep love affair with everything USC, from academics to arts and athletics, the local community and the worldwide network of alumni.

“The life and work of Steve Sample has inspired lasting gratitude within the Trojan Family,” Nikias told the crowd gathered around the Tommy Trojan statue. It was a fitting location, outside Bovard Administration Building where Sample worked for 19 years, in the shadow of Steven and Kathryn Sample Hall, in view of the statue of USC mascot Traveler that the Samples donated to the university on his retirement.

After the USC Thornton Choral Artists performed “The Road Not Taken,” Soni was joined by his predecessor, Rabbi Susan Laemmle, who read from Psalm 24; the Rev. James Burklo, who offered a prayer; and USC’s Muslim chaplain Jamaal Diwan.

In spite of the sadness of the occasion, Diwan said, “We say in the words of Dr. Sample, ‘Isn’t it a great day to be a Trojan.’”

The visionary educator led the university from 1991 to 2010 and helped launch it into the ranks of the nation’s elite research institutions.

The effort is building the endowment for faculty, research and student scholarships as well as advancing the university’s academic priorities.